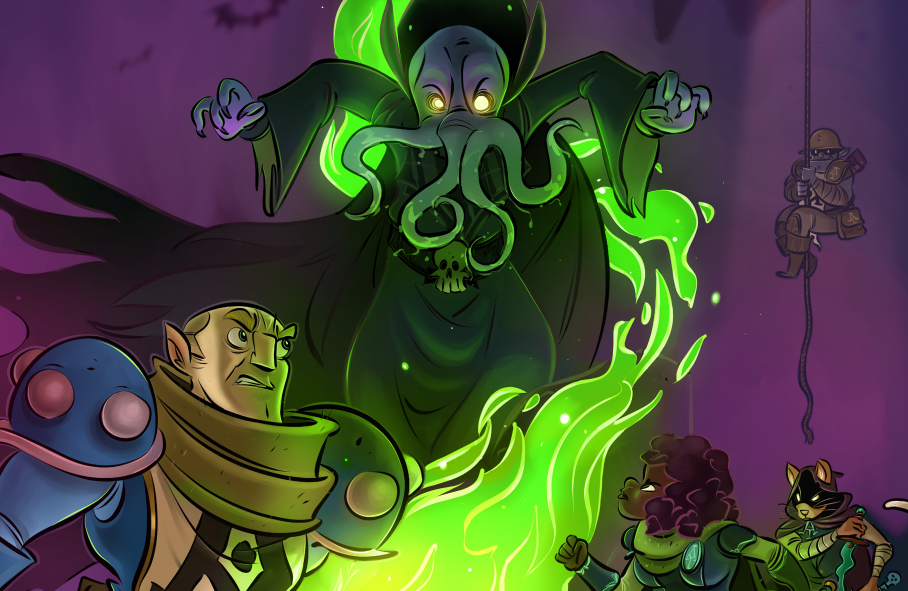 “It’s raining in Fallcrest.” Many of us were brought into this hobby from the exquisite work of Christopher Perkins and the Penny Arcade crew in the fledgling days of 4e D&D. Now, PA and WotC have come together to bring you EVERYTHING you need to make your own franchise!

While 4th edition may have floundered, being too far different from previous iterations for oldschool players and too prolific for new dabblers, the legacy of Acquisitions Incorporated has continued to flourish. With the wild success of “The C Team” and the repeated standing-room-only popularity of the Acquisitions Incorporated games at PAX, it was only a matter of time before Penny Arcade and Wizards of the Coast made a quasi-sourcebook for 5e. Some may have feared this was a cash-grab to rake in money from the wildly popular Podcasts and Actual plays, but it is apparent immediately that this book was made with tons of care and love from everyone involved. So going forward, know that the jokes and humor present inside this book are made by people who love the game for people who love the game.

TL;DR: Buy this book, it’s quite good. Not a cash grab like some people thought.

I feel it’s safe to assume the binding and production issues of yesteryear are no longer an issue. This is the third book in a row that has seemed pristine in terms of construction. That’s pretty much all I have to say about the materials of this particular volume – they seem A+.

The cover is a single wrap-around image positioned mainly on the front. Art by the prolific Mike Krahulik (Gabe from Penny Arcade) sets a wonderful tone for the book. Bright, vivid colors help it stand out and showcase the comic-book style art inside this book that we do not see elsewhere in the official publications from WotC.

Also of note, the matte finish around “help wanted” is very exceptionally well done for some reason. It feels incredible. The style of that section sets the stage for the rest of the book, as well. If this back snippet makes you roll your eyes, don’t open the book.

Before we get into the “meat” of the book, I have to take a moment to explain that this book could work as an art piece on your coffee table. There is so much vibrant, well done, stylized art inside the book, it’s worth the price of admission before you read a single word.

The unique thing about AI: The Book is that it overlaps several fields that people may not enjoy separately: Penny Arcade, comic book art, fantasy art, dungeons and dragons, and comedy. The overlap is most visible in the art, which is why I bring it up.

What I enjoy most is seeing the shift in tone between high fantasy digital paintings and character art that looks straight from the pages of Penny Arcade and PvP webcomics.

It’s just so very refreshing to see the two worlds collide in a professional and heartfelt way.

You can find the artist responsible for each piece on the innermost edge of the page! Don’t forget to tell them how much you admire their glorious works.

Everything about this book is devoted to Acquisitions Incorporated as a Franchise. The whole first chapter of the book could be narrated in one of those 1960s work education films that the Fallout series spoofs. In fact, Acquisitions Inc. has put out some of their own in the past, which I feel inspired some of the language present in the book as-written in a psudo-Omin Dran salesman’s tone.

Starting off the meat of the book, there are rules for running the literal franchise, something of a mini-game in the terms of D&D. It includes generation charts, franchise ranks, region licensing, overhead costs, Untrained Hireling options, Headquarters rules and options, and tons of other things devoted to making the startup franchise feel real. It looks to me, a novice in the business world, that years of developing Penny Arcade has given more than enough fuel for outlining such requirements – which is even more funny.

I cannot overstate how impressed I am with the sheer volume of charts, options, downtime activities, complications, rewards, growth opportunities, and other details that have been put into this book in terms of the franchise as a location.

Anyone on Twitter who hears me prattle on can tell you that one thing I promote above everything else is “location investment.” When your players enjoy the place you’re playing in, they enjoy the game more as a whole – it’s inevitable. And this book gives you all the ammunition you’ll ever need to customize the franchise to fit your party perfectly.

Along with establishing the franchise and learning about Acquisitions Inc, chapter 2-3 is completely packed with thematic, well thought out, and hilarious character and NPC options. The choices break down into:

This is not a setting specific book, but it does utilize the rich lore of Toril and Faerun, particularly the Sword Coast – all of which have been circulating for over 30 years. The book highlights many points with humor, but the humor never derides or disrespects Faerun as a setting.

Many factions present in the various podcasts and livestreams have appearances here, including small blurbs about them to help guide your game. Such as: Acquisitions Incorporated, Dran Enterprises, The Noble Knife, The Silver Sliver, and The Six as well as The Harpers, The Zhentarim, The Lords’ Alliance, The Order of the Gauntlet, and The Emerald Enclave.

Missed Opportunity. The small sections devoted to Acquisitions Incorporated centered factions just don’t feel like enough. Had they been expanded further, even just one page each, it would break the reliance on the previous media. There’s years of it, after all, and not everyone can keep up. Perhaps now that the book is out, Wikis and subsequent products may elaborate and become more robust, but I doubt it. What is present matches the level of detail found in the Sword Coast Adventurer’s Guide, so I’m not overly upset about it.

Surprisingly, we’ve only discussed the first 3 chapters of the book. It’s that saturated with noteworthy stuff! Meanwhile, Chapter 4 is devoted to an adventure called “The Orrery of the Wanderer.”

I’ll not be going into extensive detail for the adventure, to avoid spoilers, but it’s an involved and evolving quest that spans a wide number of locations and stretches a full 116 pages.

The quest is stated to be representative of a job that may require the services of A.I. and runs a party of fresh interns from level 1 all the way to level 7.

The art remains phenomenal throughout and the challenge level of the adventure seems generous without being easy. A lot of time was spent ensuring an open, yet linearly progression quest in the same vein as Storm King’s Thunder, where the setting information is swapped for franchise opportunities.

I have to point out that this adventure has a huge amount of Read Aloud text. Most of which is very well done and does a great job of establishing the professional and humorous tones throughout.

If you’re one of those few people who are seemingly upset by read aloud text, I find most of it to contain necessary information, but remember… you’re under no obligation to actually read it out loud. Just read it on your own time and paraphrase back to your players. Problem solved.

This review feels pretty long, so we’re going to skate through the appendices for you all, so buckle up.

Wanna know the stats and descriptions for Omin, Jim, and the rest of the core cast to Acq Inc, the C Team, and all the surviving characters of the Chris Perkins led liveshows? They’re here.

The easy way to categorize it is: Acq Inc founders are CR 5, C Team members and NPCs are CR 2-3. They are, I believe, quite strong for their listed CR, but that’s true of so many creatures (black puddings, anyone?) that it’s completely okay.

Each of the characters has a paragraph with a succinct description of their background, pets, equipment, and inside information many may not know without deep diving into the lore of said character beforehand.

The unique creatures in the adventure are present, and here is the direct list of creature, type, and CR for your perusal. I’m sure some will jump out at you, but the list is not extraordinarily long.

All those factions that are present in the book have to be populated, and the bestiary has a 3-page long section devoted to who/what would work with such enterprises. I like this so much that I hope they continue this sort of thing in every book moving forward. Having a long list of potential stat blocks to use for each faction makes for a much easier time prepping as a DM. Love it.

Part of the spectacle of Acq Inc is in the crazy methods in which they travel. Dragons, airships, crazy wagons, barely-a-horse turned mecha-horse, giant beholder head tunneling apparatus, etc. That’s not been lost here. In Appendix C, you’ll find stats and rules for both Battle Balloons and Mechanical Beholders.

I’m sad to see no C Team style cart rules, but… maybe next time. Seeing the very impressive Battle Balloon and Mechanical Beholder, both brain children of Chris Perkins (I believe) is fantastic.

The Orrey is very important to the quest (duh) and 2.5 pages are spent going into detail of the rules and dynamic of it and its various pieces. I think that players will obsess over collecting everything and having a working orrery, but I was pretty sad to not see any new common/uncommon magic items considering how much they are beloved by the players of Acquisitions Incorporated.

Finally there’s a chart of 100 brand new trinkets to choose from during character creation or to find during a game – most of them are normal but hilarious to DMs reading the list. Like #64: Half a map, which is followed by #65: The other half of a map.

I think there were some internal issues with the book – mainly some spacing problems, especially around some of the art. The intention was, I believe, to use that white space to draw more attention to the art, but i’d have liked to have that space filled with little sketches like the beautiful hand-drawn journal entries of maps and dissections by Kris Straub. Leaving it blank feels sloppy for a WotC product, as they tend to be very tight in terms of layout and design.

The language (that 1960s style salesman pitch) can get pretty hard to understand in certain places due to the repetitive nature of such things. (Like macaroni and cheese? Check. Want to have more money? Check. Never wanna have to sleep again but feel rested all the time? Check. Check.)

As you can plainly see on twitter, facebook, and probably your local prison – this book is not for everyone. If humor irritates you, avoid it. If colorful comic book style art mixed with high fantasy art bothers you, avoid it. If the idea of Acquisitions Inc. bothers you before you even touch the book, why would you ever buy it?

Everyone else – if there is any bit of you that thinks this book would be fun to own, buy it. This review is twice as long as many others because there’s so much here to celebrate. I think this book makes a wonderful edition to my own collection and I would be thrilled to run a franchise at some point, officially or unofficially in the future.