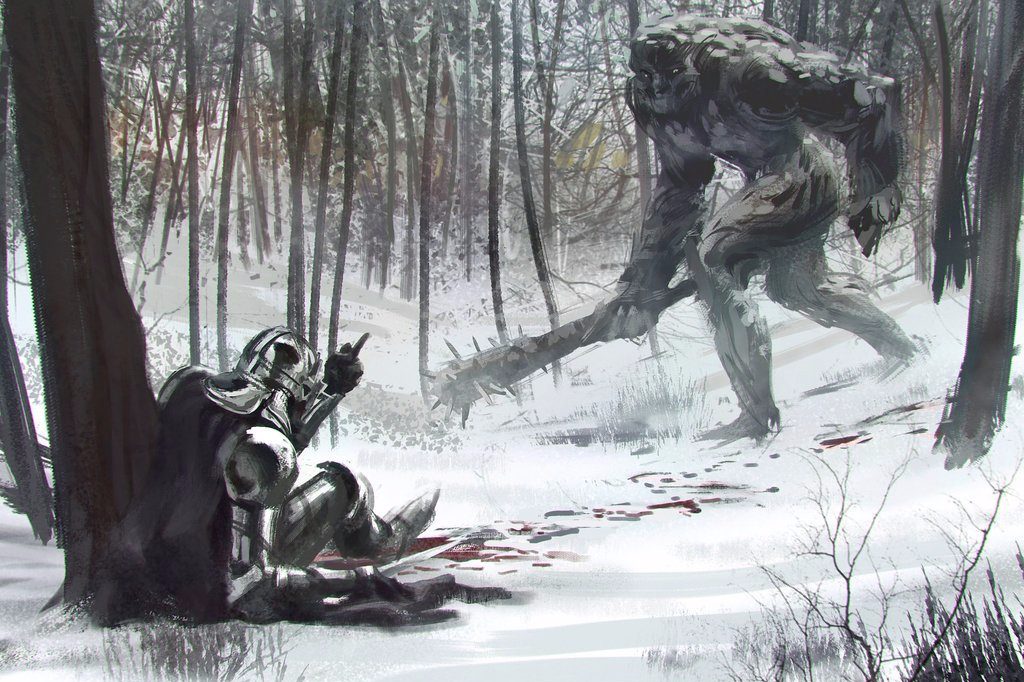 I can’t even predict how controversial this topic is going to become, but we’re going to discuss it anyway. Your story crafting, world building, NPC generation – all of it pales in comparison to one key, critical, and immutable skill: Being a fan of your players’ characters.

Let us imagine, for a minute, that you are playing in the most dynamic and immersive fantasy setting that you can dream up (such as those from Lord of the Rings, The Witcher, Dungeons and Dragons, Star Wars, Blade Runner, etc). Your first thoughts probably go to the setting, the technology/magic, the potential NPCs you could encounter.

Now let’s imagine that the Game Master who is overseeing the game has this exchange with you:

GM: You look out across the winding coast of the Spitfire Bluff and see dozens of Drowners crawling out of the brine. Geralt of Rivia puts his hand on your shoulder and says “Why don’t you leave this to me.” What do you do?

Geralt says “Look, kid, I’m not babysitting you. Get on your horse and leave.”

Uh, GM, my character is actually older than Geralt would be. Why is he calling me a kid?

Oh, I forgot. It doesn’t matter, he calls you kid anyway. He weaves a magic hand sign in front of your face and without even knowing what’s happening – you’re miles away from the coast, headed back toward Crow’s Perch on horseback.

I turn back around!

You can’t, the horse won’t let you.

I get off the horse… and I walk back.

On your walk back, the Bloody Baron’s men find you and escort you back to Crow’s Perch.

I fight them! I’m not leaving Geralt alone out there!

They outnumber you 10 to 1, but roll initiative.

Question: who is having fun here? What about this situation is interesting for that character? Obviously the GM has an idea in mind – and it requires the PC to be in Crow’s Perch. The PC, obviously, feels more interested in fighting the drowners and helping Geralt – even if it means his character’s death. And what a death that would be! Fighting along side the famed White Wolf against overwhelming odds for a chance at glory?

The problem here isn’t the GM’s plot being weak, it’s not the Player being difficult or belligerent, it’s the two of them having diverging ideas on what the player wants to do. Most of the time, these moments stem from a misunderstanding of the player’s character. And players can see that. If you put something in front of them that their player obviously would not care about, the player senses that odd unease the surrounds such a miss-step on the part of the story teller.

Let me frame this as bluntly as I can: Your game is about your players’ characters.

No matter what interesting and unprecedented mechanics, story, or quests you have in store for your table, if you are not a huge supporter/proponent of your PCs – your game will fall flat on its face eventually.

Showing That You’re a Fan

Every game master has interests that do not necessarily involve their players: plots and settings, ideas and NPCs that they envision in their games. The issue is, those aspects are removed from  your players by several degrees. They will see them occur, true enough, but they will not have a hand in their creation (for the most part).

Conversely, each player has crafted – sometimes over dozens of hours of thought and research – a single character for your game: their PC. That PC might have a backstory, a skill set, a dream or desire, or even connecting NPCs that you can utilize in the story and the world. If you ignore that contribution, you are essentially telling your players that what they enjoy (their character being fun and interesting) does not matter to you as much as what you’ve brought to the table.

So how can you make yourself become a fan of these characters? Ask tons of questions. Find out what makes those characters tick, find out what they want or dream of. Figure out how your player sees that character influencing the world they find themselves in.

If you’re running D&D and a player brings a barbarian named Nork to the table, you need to figure out what it is that Nork really wants. Does he want to recover some ancestral axe that was stolen years ago? Has he been exiled from his tribe for some slight or weakness? Is he trying to bring civilization to his people, lest they die in obscurity? Is he secretly a gourmand that wants to sample the foods offered across the nation?

Whatever it is that Nork wants to accomplish, you need to give him opportunities to advance his own plot. The party meets a purveyor of antiques who offers his services in tracking down this relic, for a price. His tribe’s new leader is pillaging the countryside less than 100 miles from where they are, apparently under the protection of the local governor. What if his talents/achievements are noticed by a local Duchess that invites him to meet with her – she has… eccentric tastes. Or give him plenty of chances to kill and eat interesting things!

This is not to say you need to cater your game to the PCs – it is to say you should give opportunities for your PCs to inject themselves into the world you’ve built!

Let Them Shine, but Cast a Shadow

There are multiple ways to show you are a big fan of a Player Character – all of them center around the notion of letting them shine.

Have a rogue that specializing in picking locks? Have tons of padlocks on crates and locked doors – let their investment matter.

Is there a Jedi in your game that has severe concerns about corruption in the senate? Let rumors trickle out that give their character’s option weight – show them that they understand the world.

Does a paranormal investigator have a significant other that has died in a horrifying way? Have their bouts of madness give them visions of their lost love – show them that their history has not been forgotten.

But it is also your goal, as a Game Master to keep the world surprising to the players and their characters. You can shift/tweak aspects of these moments to give them something to work toward – something to aspire to. The rogue might fail at cracking a safe, rumored to be impenetrable. The Jedi might be right about corruption, but what if the corrupt senator is also his home world’s staunchest protector. The investigator might have visions that slowly reveal – they were the one that killed their significant other.

Showing you love and care for your PCs isn’t about giving them everything they want (see my article on that topic) it’s about involving their character in a real and direct way. Feel free to cast a shadow over the moments they have to shine from time to time to show they still have the capacity to fail, grow, and change.

It’s my catchphrase when I want a player to just run with an idea or narrative. Just last week, my D&D5e game had a “side-venture” (a vignette showing what two players were up to when they had to miss a week) where the Fighter and the Swashbuckler were trying to retrieve an Orb of Dragonkind from a Frost Giant that was slaughtering Dragons by the dozen on his massive iceberg fortress – to what ends? They did not know.

Now I could think of a dozen ways these characters could have acquired the orb from this giant. But they don’t have all of my information. This is supposed to be a quick and jaunty side-venture regardless. So I decided that no matter what idea they came up with – I would try to let it work, narratively, to get them to the goal.

The idea that was pitched by the fighter: Catch a whale and live inside its stomach until the frost giants caught it and fished it out of the ocean – where they could spring their attack.

So, what did I do? I reminded them that they had access to Polymorph, and when both players said “Ohhhh!” I cut the scene to this massive whale being dragged aboard the Frost Giant Jarl’s ship, the fighter sticking out of the blow-hole like a person lounging in a Jacuzzi.

Does it make perfect sense? Not really. But it was within the realm of possibility, so I stuck to my motto: “Live your dream.”

There was screaming, laughter, shouts of triumph, scrambling when they realized it wasn’t a foolproof plan, hectic insanity when they were trying to get the Orb from the Giants. Twenty minutes of hilarious and memorable gameplay that the players are still talking about because I just went with it and handed them control over the situation.

Hammer It Home – With Love

The next time you run a game, I want you to cudgel your players over the head with support. Lean into their specialties and give them out-of-game knowledge to help them approach a situation.

Those of you who read that and got nose-bleeds, just TRY IT. Look at the Scholar Wizard with a background as a researcher who became a devout follower of Ogma and tell them:

“You don’t need a check, you know from your time studying in the Arcane Brotherhood that these are earth motes from a flying castle that crashed here nearly a hundred years ago. If you wanna know something specific, give me an Arcana roll.”

It gives them so little but it makes them feel extremely special, like their choices have weight! Assume every PC at your table is a superhero in some regard – and let them really DOMINATE a small, special, section of the game, and I promise you every player at your table will obviously look like they feel more invested in the game.

The trick of it is giving each PC a chance to be capable within your game. I’ve seen numerous GMs, including some popular podcasting personalities, make their players roll to open windows, look inside crates, and climb ladders under no duress – these moments might feel comical to you as a GM but no one wants to seem a fool because they were unlucky on a die roll. Bypassing that every once in a while feels awesome to players.

The TL;DR version of this entire post boils down to – imagine your table’s characters are the protagonists of your favorite novel, movie, or TV show. They can fuck up and make mistakes, but if that’s all they do then you get really irritated, no? What about when your favorite, really awesome, character has to play second fiddle to someone who always seems to be better than them.

The same exact thing holds true of your players when you do it to them in the game. Have a little empathy, let them be awesome in their own right, and don’t forget that they are the stars of your (plural) show.