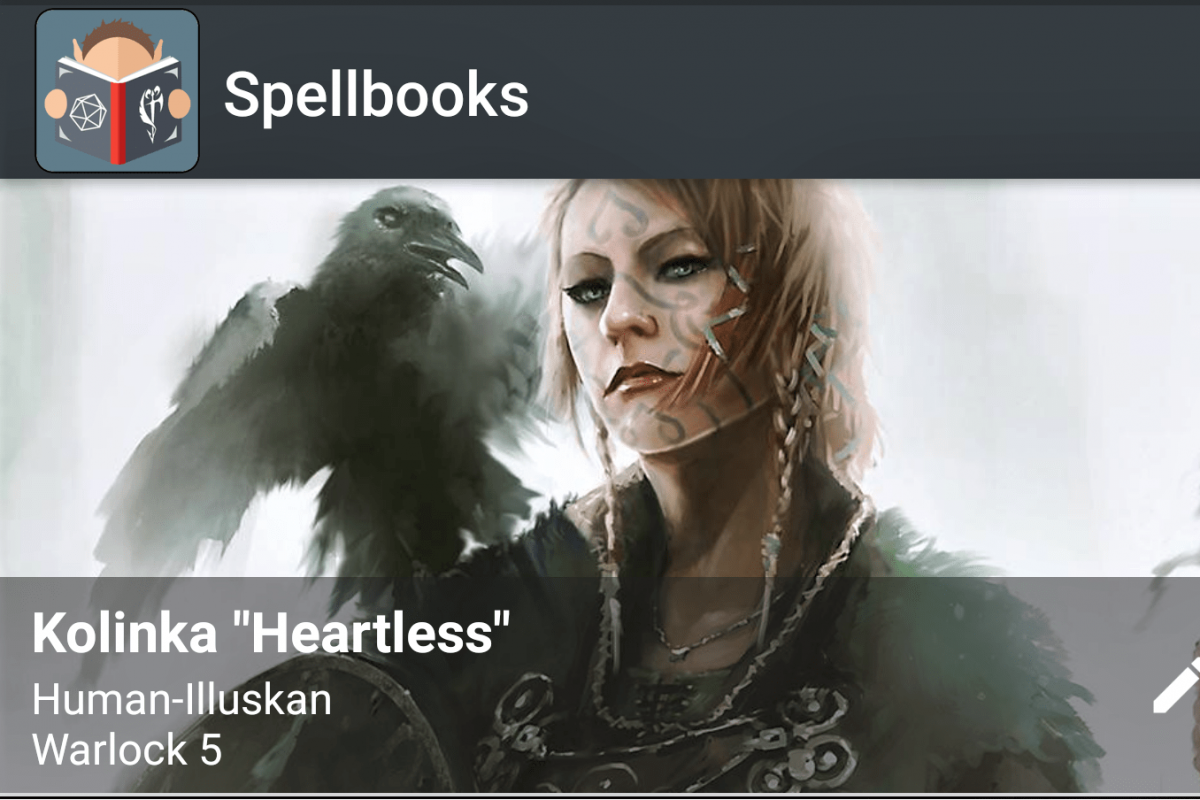 This is a first! A few people every week ask me my opinions on applications that can be used for my tabletop games. So, I’ll start out with the one I use every. freaking. game. At least once, anyway – whether I’m a spellcaster player, a DM, or running interference for the DM by quick-drawing those tricky spell rules.

Okay – these reviews, I’ve decided, won’t be as detailed as product reviews – think of it as more of an overview!

For starters, the 5th Ed. Spellbook app is pretty damn sleek. Each spellbook you make has the option of displaying character art to help you pick out your character faster and keep a radical as hell comic book style theme going, which I approve of.

The general features of the app are as follows – each of which we’ll take a quick look at so you can get better acquainted with what this thing has to offer.

Each character you input into the app is given their own customizable spellbook: a collection of their relevant stats, known spells/prepared spells, spell slots, and a selection of all available spells for that character’s class – including filters!

For Wizards the spellbook also offers a “Known” spells (the spellbook itself) and “Prepared” spells – allowing a character to know more spells than they have access to on-the-fly.

The thing I enjoy most is having access the full spell descriptions.  The spell sheets contain all the info from the published books as well as which page and in which book the spell originated. The information for “at higher levels” is also on the page (just under that Loreal add, as it were).

NOTE: These spells are manually input, so there may be errors or punctuation issues. Luckily, there is an edit function to fix annoying issues in no time.

This is the DM’s best friend. With a full list of spells and a pretty fast search function, I pretty much keep this open from 6pm-10pm every Tuesday.

Even without expanding the full spell description, having the school, action, level, class, and components is always just so goddamn helpful. Add in the useful filters and the search function – it’s faster to pull this up and read the spell than it is to open the book and start finding the page!

So this is the high-point, friends. My new character, made completely by internet voting, is an Earth Genasi Hexblade Warlock… none of which was already written into the app. But within 10 minutes:

As you can see, almost everything is alterable/buildable inside the app. So I started plugging in the info I needed:

Under classes, I just had to tap in “Hexblade” and start editing the new subclass, including bonus spells (expanded spell list) with the option to write in all of the additional features offered by the subclass (Hexblade’s Curse, Hex Warrior, Specter, etc etc) – elevating the app even above just a list of spells.

Repeat the exact same steps with the race – and now i’m ready to rock! It can keep track of spells granted by race, bonuses that apply to your spells – all that noise… even your fresh picked green beans.

The app also handles something that I do not often use, but is completely an option. I even suggest young/new players try it out especially.

From inside your spellbook, pull up your prepared spells, and select the spell you want to cast. In the top right, under Features you can see the “Slots Used 0/1.”

On the bottom of the app, you can see the “Unprepare” (for your Wizard long rests, letting you swap out spells) and “Cast” which literally casts the spell from your book, choosing and expending a spell slot –

And when the spell is finally cast, it actually plays a sound – one from a list that you can download with the app or an MP3 of your choice.

Afterwards, the “Slots Used” has changed to 1/1, showing you have no slots left to cast.

Why is this cool? YOUNG PEOPLE and NEW PLAYERS often do not keep track of their spell slots. They don’t remember them, they don’t mark them – it’s a bit of a hassle. So making those “problem” players actually cast a spell with the app (so the DM can hear the spell’s sound play) is a GREAT way to help keep track of those players’ spellcasting.

These three are self explanatory. If you find yourself making tons of changes to your spells/spellbooks (or creating your own spells) backing up your app is a great safety net.

Also, hundreds of people spend time populating the spell lists for this app! You can do all the inputs by hand or you can download the entire book worth of spells online as a zip file and import it straight into the application.

I’ve been with this app since it was launched. I think it’s the most useful app at the table.

I do wish that the introduction of bigger ads did not happen – as now we’ll be roleplaying and all of a sudden “DOWNY FABRIC SOFTENER OFFERS FAR MOR-” with me cramming the X and muting the phone while everyone sniggers and laughs. 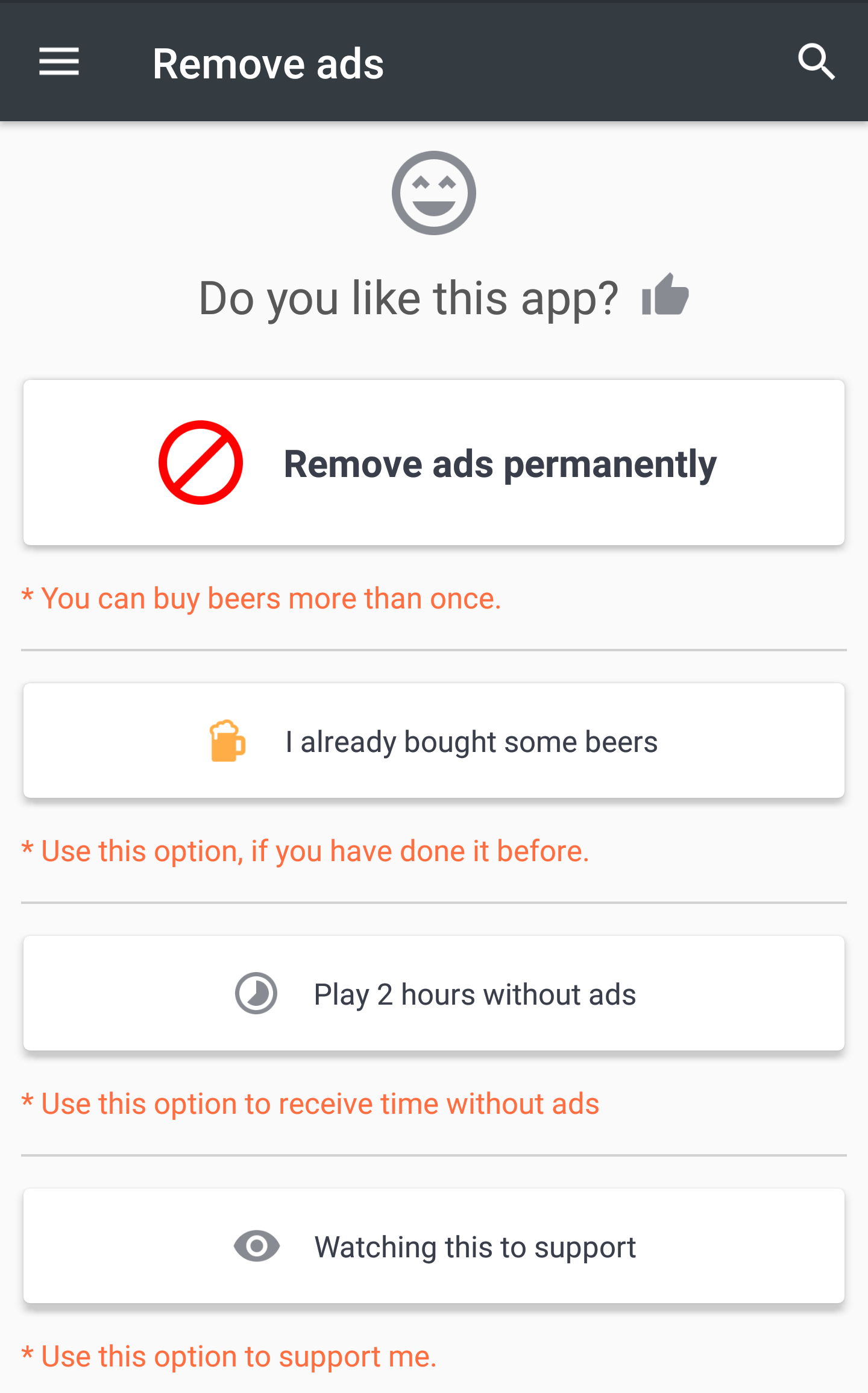 I sincerely have no clue what any of this shit means – but I do not hold it against the creator as I do not think that English is their first language (from my emails with them before this review). Seeing ads for creamed corn along the bottom of my screen is acceptable. Having bullshit play on my screen and blast out mid-game is pretty unacceptable.

Give this app a try and if you like it, i highly suggest you just get rid of the damn ads as soon as possible.

Leave a comment with an app you’d suggest in the future!