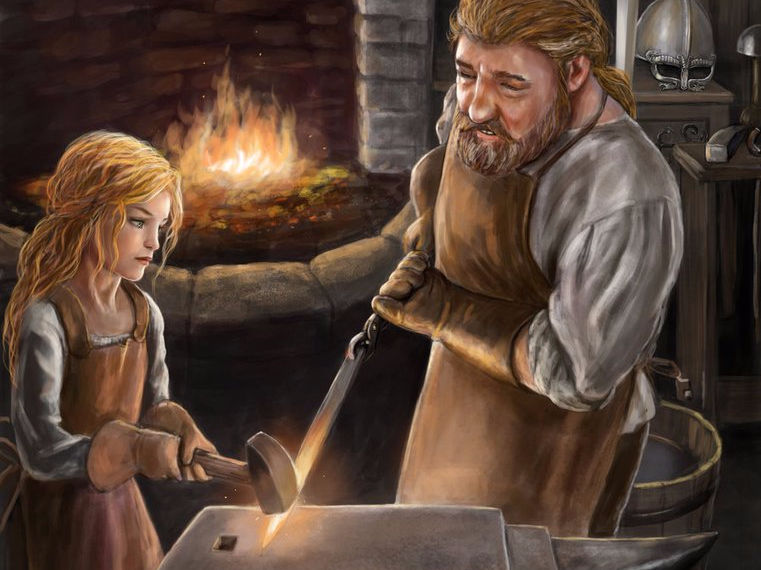 All roleplay should be grounded in the world – the mundane should always be apparent and moving just under the surface of your game. But every once in a while your RPG of choice might slip into what I call the “UnGame.” The danger you face when the UnGame goes on too long – your entire actual game could crumble.

What is the UnGame?

When playing a Tabletop RPG, people approach it with an unspoken and understood conclusion: “We will be playing our chosen game as it’s intended to be played.”

The UnGame is something akin to slippage. When the world outside the scope of your chosen game starts to creep into the edges of what your players are doing. Living with the UnGame is an important part of most Tabletop Role Playing Games – the fighter who has to run an errand for his mother; the Shadowrunner who has to take their daughter to school; the Detective Agency who finally throws a Christmas party.

The UnGame gives much needed and loved contrast to the rest of the game – it shows what these people are actually struggling for. But it is also not what you’re here to play. Your adventurer should adventure, not spend 4 hours teaching his daughter how to blacksmith.

A Foreword On Advice Articles

Before we get into the meat of this article – this is advice. You should drink more water, sleep a little more, wash your pillowcases once a week at least, and stretch when you wake up: just like each of those statements, advice articles are generalized. They do not fit every single scenario, group, game, or player. They’re just a general and broad, mostly benign and safe to apply, suggestion for people.

Some gaming groups could be completely content to play Dungeon Crawl Classic and do nothing but make and sell chairs. If that’s your group, this is clearly not for you.

Primarily I write these articles to get people thinking about aspects of the game they may not have otherwise thought about. They are not set in stone nor am I infallible! So with that in mind, hear me out.

The UnGame Is A Cannibal

Here’s the thing – in your TTRPG fictional resources are infinite. There are always more bad guys, more interesting scenes and locations, more rewards or treasure, more intrigue, more people to meet. Your campaign can even span 200 lifetimes if you so wish.

The one thing your game cannot do, I’m sorry to say, is give you back your real-life time, energy, and effort. Whenever you’re not playing the game as intended, you’re playing a balancing act between Fun and Entertaining Banter and Literally Wasting Your Table’s Time.

Imagine, if you will, the following scenario taking place in a
Dungeons and Dragons game:

It’s been five years, but Gredz has finally stumbled onto his old friend, Meepo. Gredz and his companions are just waiting around town currently anyway, so he takes his kobold friend out for some ale and decent conversation – particularly how Meepo managed to survive the cave-in that separated them all those years ago.

Now this is beyond a doubt, UnGame. But it’s wonderful! You’re essentially trading a sliver of your group’s game-time in order to highlight an interesting part of a character’s background. In this instance, the tavern meeting is an investment in Gredz as a character, and makes sense.

Meepo and Gredz speak for a few hours, then Gredz carries his black-out-drunk reptilian friend back to the inn. Gredz tells his companions who Meepo is, and that he managed to escape a cave-in with the help of some soft-hearted human miners from this very town. Gredz plans on meeting these people tomorrow, to show his appreciation in person for saving his friend.

Okay, we’re still in the realm of good gameplay. The scene has developed and brought in more chances for the world to showcase in an engaging way. What information do these miners have? Who are they? Do they know of any lucrative ventures for the party? Tons of options!

The next day Gredz, Meepo, and the other four adventurers head over to Bellware Ironworks. When they get there, the miners are preparing for a trip into a near-by mine to look for new iron ore. But they postpone their expedition to have lunch and drinks with the adventurers. Business has been going well, and Meepo has been a great asset to the Ironworks – his singing and scouting abilities are held in high regard. Lunch is incredible: fire-roasted cod and rosemary potatoes with goat cheese and figs, and the leader of the Ironworks, Jak Bellware, takes a shine to the adventurers and invites them back tomorrow for more tales and food.

We’ve had three scenes now of nothing but mundane, real-world, average situations – the UnGame. Each passing scene devoted to the UnGame takes away game-time from everyone involved, including the Game Master. Even still – there is a chance to make the most of this down-time story to give the players something to slingshot them into the thick of things. An earth elemental could awaken and collapse the tunnel, trapping the miners. A nest of rust monsters could be uncovered and swarm out into the town, feeding on iron. D&D, at its heart, is a game about monsters and adventure, magic and fantasy, after all. But what if…

After shopping in town and asking around, without much luck, about local rumors, the party spends the night relaxing and waiting to meet back up with the Ironworks crew. That night Meepo plays at the tavern and pays for more drinks and food. Merriment is had. The party then goes to the Ironworks the next day, and Jak’s crew is happy to share another meal with them. Their excursion went well enough, they think they have a lead on a safe and easy-to-work iron vein. Lunch is okay, but nothing special, and the miners set off to go reap the rewards of their scouting.

It’s been three in-game days. It’s been hours at the table. Nothing has happened to actually use the system. Now I, for one, have a large tolerance for the UnGame. I’m alright watching these mundane occurrences as though they are the long-winded scenes in early Game of Thrones episodes, happy to see the world exist. But you’ll never get that time back. You’ll never give that time back to your players, either. And the more time you spend with the UnGame, the less you have to actually play the game.

Each group has a certain level of tolerance to the UnGame. The only way you’ll find out how much your group can handle is to experiment. Set them on paths of “nothing to do” for a while and see when the wheels start to fall off and people start to get bored. Traditionally, there are some red flags you can look for to signal boredom:

There are thousands more signals, but these have been my personal red-flags, so maybe it’ll help you out. Once you start seeing these, immediately throw something at the party from left field. Something threatening, interesting, unexpected, or frightening.

Gredz and Meepo put on a show that night at the tavern. Many in the group feel claustrophobic being in this same place for so long, but they want to let Gredz and his friend have their time together, it’s only fair. In the rainy night, a peal of thunder shakes the walls as laughter and clapping fill the inn. [Alex puts their hand on their cheek and lets out a long sigh, clearly bored.]
[Immediate move:] “Another clap of thunder, loud enough it seems to buckle the windows. People gasp in shock; beer sloshes from steins on the tables. Strange rumbling sounds echo out on the street, and you hear a shrill cry: “GIANTS!”

No system, in my experience, allows for UnGame/Game balance as well as Powered By The Apocalypse. Particularly Urban Shadows an Urban Fantasy “Dark Underworld” game I’d highly recommend. But even with a system devoted to it, and even with a well meaning Game Master, the UnGame can creep up on and bite you on the ass.

I’ve played entire game sessions where things keep happening one-after-the-other but I never even had to roll a die, but had a blast.

I’ve also played two consecutive 6 hour games in which I barely said a word and wondered why I was even there. Be aware of how long the spotlight lingers on these “everyday” scenes. No one watches The Avengers to see Tony Stark in a boardroom for 3 hours discussing marketing strategies.

The UnGame will always be there, but it should be used as a tool to highlight the actual game you’re playing.  The fighter running an errand for his mother inadvertently discovers she’s being tracked down by an assassin; the Shadowrunner who has to take their daughter to school sees a Mr. Johnson he’s worked for in the past standing outside of a black SUV in the school parking lot; the Detective Agency who finally throws a Christmas party is attacked by unnamed horrors hell bent on stealing a package under the christams tree – a package no one recognizes wrapping.

One thought on “TTRPG Advice: The “UnGame””