The truest struggle of the DM/GM/MC/Keeper is knowing how to please as many players at your table as possible at the same time. What makes such a seemingly small goal a herculean task? Your players have no idea what they actually want. It’s your job to show it to them.

Each and every Game Master I’ve played under has stumbled and tripped over the idea of “giving the players what they want,” and I do not, at all, fault them for it. Players are timid. Players take the path of least resistance. Players come to play the game with a mind of incredibly conflicting and contrasting desires: they want a game that seems fair yet challenging, intriguing yet understandable, mysterious yet familiar, heart warming yet heart breaking, exciting yet relaxing – and trying to appease each of those facets of their desires at the same time is, to be frank, ridiculous and implausible.

To fight the bug, we must understand the bug. The bug is the player. And the game. Okay, this fell apart.

Understanding a player’s wants is easy at your table. They want to be completely untouchable bad-asses that hardly ever fail and come out on top like champions. They want to shed away their placid and mundane life and come to your table ready to take on eldritch horrors, to throw their characters into the meat grinder of Tomb of Horrors and come out unscathed, they want to punch out superman and laugh. Elevating something they made (their PC) above obstacles and past boundaries feels amazing and fun!

Understanding what your players need is far harder. When no one loses, there is no point. Imagine giving a player a d20 with nothing but 20s on every side – the player who has it will laugh and feel amazing by contrast to those plebs that have to struggle! Now give a “nothing but crit” die to everyone at the table excluding yourself… They see and hear and know and do everything they want to do. I can guarantee that game will get absurd within an hour because the players will constantly push their boundaries to see what you will allow them to do.

Can they kill a town guard without anyone seeing? Can they punch through a wall? Shoot an arrow through time? If you do not set limits and boundaries before players, they will run rampant. And while chaos is fun, for a time, it is inherently destructive.

As a Game Master your goal is not to give the players exactly what they want. It’s to give them almost what they want and, more importantly, what the story wants. I cannot stress this enough. If your player desires for their character to be the “world’s greatest thief” – the player does not want it to just happen, no matter what they say or believe. They want to earn that title in some way. Giving them limitless resources, perfect information, and heists that go off without a single hitch will seem boring and pointless. Where’s the thrill of stealing if you never almost get caught.

Thus, it is your job to almost catch them. You do not work in opposition of your players or their characters, you work to represent the world, the setting, the story that the characters are currently embroiled in. The world, as it were, does not care one measurable shit what the PCs have planned. Guards get bored. Computers don’t start quickly. Door motion sensors go off when the wind blows. People forget seemingly important details. It’s an aspect of life that adds what people like to call wrinkles into your day-to-day. And those same wrinkles need to be present in your game.

You, as the Game Master, should never give the PCs something perfect, for free, just because they asked. 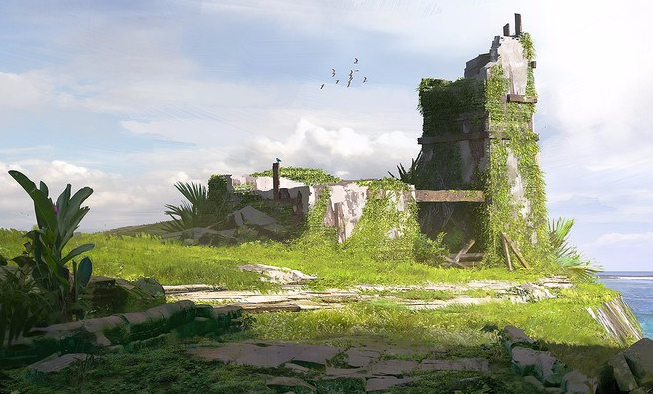 By example, we’re going to have our players sneak into a bandit watchtower!

Harmen and Kyra decide they have to free the mage that was, supposedly, ambushed on the road a few days ago. Witnesses say the bandits of Cold Harbor snatched the wizard and took him to their watchtower for ransom or maybe to try and recruit him.

Harmen thinks it best to crawl through the sparse bushes nearby and get a look at where the bandits are at this time of night, while Kyra watches from a distance, her bow ready.

Now this is a pretty good plan – as a Game Master you can let them just do this. This is not the time for a wrinkle. They put thought and planning into this recon to get a better idea of how to handle the situation. They should be rewarded by it not blowing up in their faces immediately or being impossible for them to do.

“Harmen, you crawl on your belly probably 50 meters onto the side of the hill and you’re pretty sure no one has noticed you in the moonlight.”

Now you allow the mechanics of the game to decide what Harmen sees. If Harmen fails this check, it is a perfect opportunity to place a wrinkle in the future.

Harmen rolls a 12 for his perception check to locate and watch the guards. “You see three of these brigands are sitting around a soup pot just outside of the watch tower. There are two more on foot about 70 feet in front of you a little up-hill, walking the perimeter. You can’t hear what they’re saying, but you see them. One of them is shaking the last bits of drink out of a wine-skin, the other tosses his weapon down on the ground, he looks irritated.

The wrinkle, in this respect, is the unknown. One of the guards is complaining about their wine ration, his friend just finished off the last of what is in the skin – you’re setting it up that they will get in a bit of an altercation over it, and one of them will end up tumbling down that hill right onto Harmen’s position. You’ve not screwed the player – you’ve just let the world give him a complication to deal with. If Harmen keeps his head or Kyra acts quickly, maybe they can get out of situation no problem.

Harmen has no idea what the guards are saying and decides it’s best to stay put. “A minute goes by, they seem to be murmuring in heated voices – you still hunker down in the bushes?” Harmen’s player says yes.

Now we’ve taken the opportunity, knowing what the wrinkle is to be completely clear what Harmen is doing – a wrinkle should almost never come out of nowhere. That rarely ever feels fair – and your players will think you’re out to ruin them.

“All right, Harmen, you see these two guys start to grab at each other and wrestle some. The one with the empty wineskin in his hand gets a vicious knee to the stomach, and folds up. When he falls over, he rolls straight down the hill toward you, sprawling out in the bushes five feet away, groaning and trying to sit up. What do you do?”

The wrinkle has become a complication – through Harmen’s inaction and poor check, he’s found himself in a sticky situation. On the down-side, he’s out here with two guys alone. On the plus side, he’s not been seen yet and they may not see him. The wrinkle, however, has turned this effortless recon mission into something exciting that makes sense! Could they have traipsed up there, seen the bandits, got a head count, and left? Certainly they could have… but it’s pretty boring to give them something for nothing. Reward good ideas by letting it happen (Harmen knows there are 5 bandits awake at the tower) but always allow for wrinkles (two of them might spot him).

When your PCs want to go to a rave downtown to meet with Kventh, a vampire that owns the nightclub. A good small wrinkle to put in their way is that someone they are currently at odds with is meeting with him first. 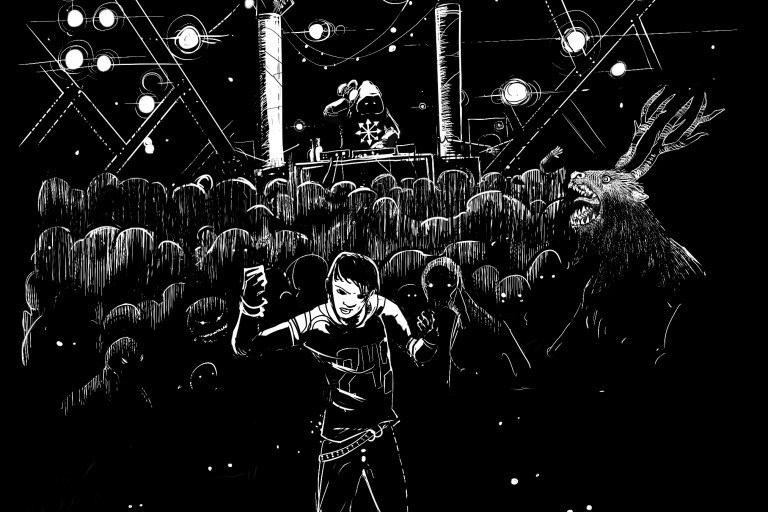 The wrinkle gives them the chance to act (come up and say their piece, hope their antagonist loses face in front of Kventh) or wait (hope the scumbag leaves soon and empty handed).

A medium wrinkle is to have the PCs waltz into the VIP section right as Kventh is feeding off of one of their sisters, clearly out of her mind on something.

A huge wrinkle is to have Kventh be on the VIP couch with a stake driven through his heart, sitting in a pool of his own blood. When the PCs see it, they realize no one in the club is dancing anymore – and the huge throng of vampire ravers are looking straight at them, hungry.

See, the reason I call each of these wrinkles is not because of their size – a wrinkle can be an entire mountain range within the story. I call them a wrinkle because they can be smoothed over by your PCs and Players. They can call the goon out in front of Kventh and hope their street cred is good enough that he listens. They can drag their sister out of there and demand Kventh give them the information they need for the slight he just caused. They can try to talk their way out of the Rave, hoping to get on the good side of whoever killed Kventh and took his position.

The important part is, they have options. No wrinkle should only have one outcome. It’s not a road-block you use to stop the game or screw with your players – you add wrinkles to give your players a challenge and an obstacle to overcome!

It’s easy for GMs to take their wrinkles too far. You KNOW who you are, you guilty cur, how dare you be so cruel and … you know what, it’s not worth it.

When the group walsk into the rave at Kventh’s place and it blows up without warning, killing everyone inside – including the PCs sister – and half your PCs…

When you give no warning, leave no option, or undercut your players’ preparation and hard work, you’re not giving them a wrinkle to smooth over and deal with – you’re just punishing them for seemingly no reason. If you’re guilty of this sort of nonsense, stop it immediately. If you just thought “Won’t stop, can’t stop, haha” you’re an asshole and need to re-evaluate why you run games in the first place.

Your players want to succeed and want to be amazing, but without opposition – the game is pointless. You need to challenge your characters in a way that isn’t just tied to their resources (hitpoints, conditions, boxes of damage, spells, madness); you need to challenge them to think-fast. Be in the moment. Realize that even in this game, life gives you the unexpected. Keep it fair, keep it honest, and keep it interesting – and when your characters finally get what they want, celebrate with them! They’ve earned it!

One thought on “TTRPG Advice: Giving Players What They Want”