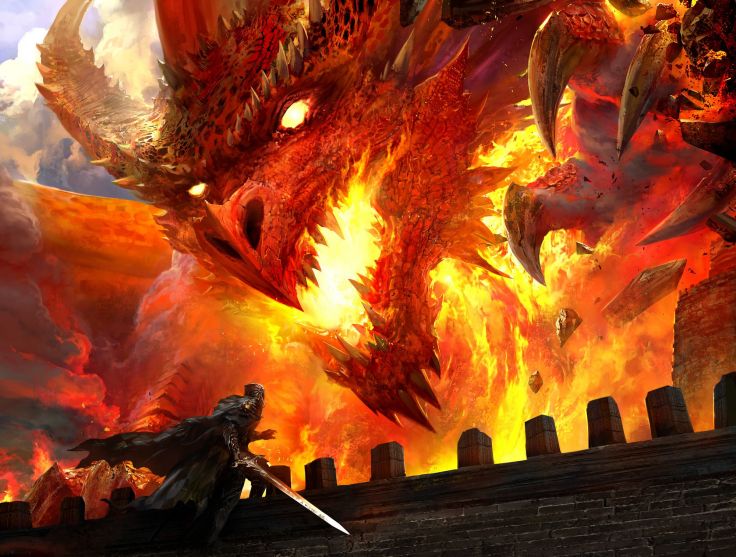 Have you ever been in a game and things start to slow way down to the point players are losing focus and teetering out of the immersion you’ve built together? Chances are, the stakes have been lowered too far for your gaming experience. In this article, I’m going to show you an easy and time-tested trick to make those slow bumbling moments into something incredibly memorable that will fling the story forward – all with very little effort on your part.

When improvising a game (or even playing in a game – you players are not exempt from this article), the safe bet when you’re stumped is to “see where it goes.” I’ve done it, you’ve done it – it’s like saying ‘Umm’ when you can’t immediately think of the word you need – it’s a safe placeholder to get you through to the next interesting moment.

The Lightbringers find themselves back at the Wizard of Wines Winery. Luckily everything seems clear and quiet. The party meets with Urwin, unpacks, and settles in for a well deserved rest. The first watch goes by uneventfully, and leaves Erwin and Maria time to talk – but they don’t talk for long, neither of them are quite comfortable with one another still.
The second watch rolls around, and Ceaser spends some time walking around the winery with Thistle. The two of them chit-chat about what’s happened the past few days – the destruction of the winery, their fight at Yester Hill, the decent into madness of Krezk. The second watch is uneventful –

Now, as a DM, I was expecting some heart-felt moments. My guys love roleplaying and intertwining their characters in interesting ways. But there was no real threat, no real drama they had to contend with right now, and it made them all placid and thankful for the respite. The only problem? Peaceful respite is, by definition, incredibly boring.

other than a large raven perched on the edge of the roof, tilting its head back and forth, watching the adventurers – one of the wereravens that call this place home.
Thornbrax and Vek, best friends, manage to snag the third watch together. They secret a single bottle of extremely rare wine away to celebrate how well things have been going. They sneak up onto the roof to shirk their duties and get a little wasted!
Thornbrax takes a look around while Vek pops the cork, and says hello to the single raven.
Me: You look at this raven with his wet, bulging eyes, tilting its black beak back and forth with its head kinda lolling behind it.
Thornbrax: “Do you want a drink? You dont-”
Me: Make a wisdom saving throw. (rolled an 8) So, Vek… You see Thornbrax kinda stop moving for a second – and the raven is Strahd Von Zarovich.
Vek’s Player: “Haha!”
Strahd: “If you move… I will kill him, Vek.” (Strahd puts his long delicate hand on top of Thornbrax’s head. )
Vek/Vek’s Player/Thornbrax’s Player, realizing it’s not a joke: ‘AHHHHHHHHH!’
Strahd: “You will take your friends to the Amber Temple, Vek. I have sworn to never hurt you… but they (he slides his long nails into Thornbrax’s hair) do not have that luxury.”

Every page in a novel, a writer should fill with the idea of “what’s different” or “what’s changed” – the same is true at the table. But you’re also not writing a goddamn novel. You’re weaving a story of suspense, action, and heroism driven by characters and moments to remember!

When you make your characters roll three times to climb a ladder or you make a door that can’t open unless you solve a weird riddle – you’re adding filler to your game, not actually changing anything. Sometimes it’s fun for players to figure out why they can’t move the rock at the entrance to a cave, but I can promise 100% of the time it’s more fun to make that rock an Earth Elemental set there by a Wizard who found the cave years ago, who seems to think the wizard in the part is his creator.

Your players are a captive audience – they’ve invested time and energy into coming to the game, they’ve already sacrificed a slice of their life and set it aside to play the game with you. Most will sit there and smile even if they’re having a really shitty boring time because they want to be nice and they want to get something out of their sacrifice. By ramping up these boring moments in a real, unavoidable, bone-shaking way – the table will reinvest in the game almost immediately.

My table is generally comprised of 6-8 people. On any given session, only 2, possibly 3, of them will actually have the spotlight in any noteworthy capacity. It’s the problem with large groups.

But if you, seemingly at random, spring these game-changing moments on them, the moments that make your players and their characters ask “What the hell is going on; what do I do now?” – you will get their absolute undivided attention any time you call on them at the table. Even if nothing happens to them, they will be ready for it. They will act and react as though the world could explode at any moment – and one minute of that is better than 4  hours of crawling through a pointless dungeon.

The hard part is determining what to spring on them and how. I am a true and honest believer that all moments like this should be character driven. An NPC shows their true colors or makes a demand. A PCs backstory has come back to haunt them in a real way. The PCs recent actions bear unwanted fruit. It’s your job as a DM (and as a player!) to keep an eye out for these threads to pull on.

Thornbrax stayed in a small village for several days after his companions already set out to cross the Sea of Fallen Stars. It’s been a long road and a man has needs. Through the course of his stay, and with the help of a Mystic capable of reading people’s emotions, he actually befriends and romances a woman named Delia. Naive to the world but full of energy, the three of them set off to Cormanthor, where Thornbrax plans to send her to Elventree – where she can wait for a time until he comes back for her.

Weeks later, Thornbrax has finally caught up with his companions and entered the Cartaran Tournament – a dark and twisted arena fighting circuit overseen by a mysterious group of humans, each who sent the teams invitations to come. Now, hell bent on winning the prize (a wish spell among other goodies) Thornbrax and the group have found themselves in a very deadly game. When Thornbrax receives a note to meet his “Love” by the docks, he heads out fearing an ambush. Luckily his best friend Vek is by his side in case things go bad.

How can we make it worse?
Much to Thornbrax’s surprise, Delia is actually there! At the docks, some 2,000 miles from where she should be!

How can we make it worse?
“But… how did you get here?”
“This woman brought me, she said she knew you!”
The sting of a blade-point digs into Vek’s back.

How can we make it worse?
A thin female voice says to Thornbrax – “Hello, Brother.”

Why is she here? What does she want? Is Delia safe? How can I get her out of here? Why does she have a blade at Vek’s back? Is my sister going to try to kill me? What should I do?  – these questions are the bright flashing neon sign that says “you won” as a Game Master! Not only is Thornbrax’s player thinking all these questions, but EVERYONE at the table is. The single question How can I make it worse? has quadrupled the drama in a single scene!

Now, before you start protesting, once the moment is had – you can cool the situation some. The sister didn’t want to kill Thornbrax, but she did bring his lady-love to low-key threaten him into helping her. Not every moment like this should end in blood – OFTEN they don’t! Because fighting/killing is only dramatic for a moment – but setting up questions, thoughts, fears, and concerns will pay off for MONTHS of game time.

Have the bad guy overwhelm the party and walk away – Why did he let us live?

Have the NPC the party knew and love try to poison them but only succeed in poisoning themself – Who can we trust, who got to them?

Have a wanted poster on the wall of the tavern with a PC’s face on it, and a bounty of 3,000 gold, WANTED ALIVE – What the hell did we do to merit this?

And each of these little ploys can be leveraged to provide you, the DM, and you, the player, tons of opportunity to improvise a new and interesting sub-plot to your campaign! Some of these questions will catch fire with the entire group and soon the campaign has changed from “Kill the bandits” to “Prove the King is an impostor and confirm (PC) is the true heir!” – and if that’s not fucking wonderful, I don’t know what is.

Hopefully you can feel comfortable adding in these speedbumps, not to slow the game down, but to shake things up. If you need any help cooking up ideas, you know where to find me.