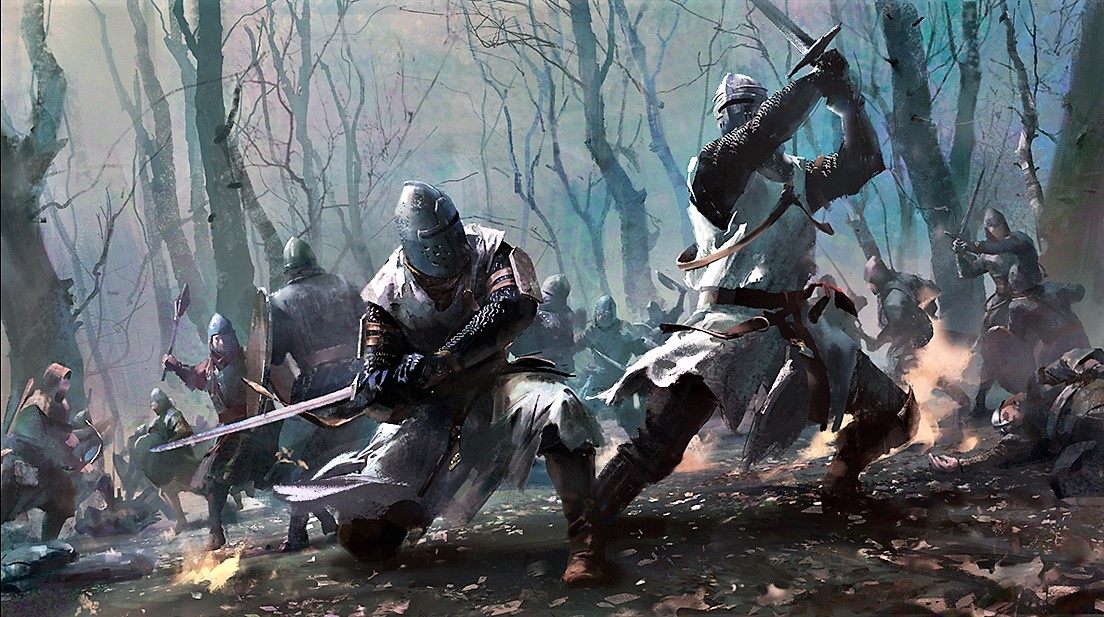 We all diversify eventually – and today marks my expedition into GM/DM/Player guides. Some of my players have brought up my adroitness for “centerpiece combat” encounters. Hopefully, by the end of this article, you’ll understand how to plan out a story filled, interactive, and memorable combat encounter for your favorite RPG – a capstone for a story arch only solvable through violence. Let’s get to it.

What is a “Centerpiece Combat” encounter?

In Tabletop RPGs – there are an infinite number of solutions to any given problem. The barbarian could ally himself with the evil king. Those Uranium smugglers out in Sector 228 could be paid off to abscond with their cargo. One of your investigators could bind the Dark Young with a spell she found in Arkham. Though sometimes – the characters realize bloodshed may be their best option.

Some game masters like to prep as little as possible, and I am a self-taught student of the “Five Points and Five Names” method of prep, but when your entire game funnels slowly toward a knock-down drag-out fight with an entity or a group, there is something fulfilling as a game master and a player in having that fight be something special.

A Centerpiece Combat encounter, a definition I do not believe everyone uses, is simply that – a battle in which the campaign, plot, and all of the characters are focused on and brought together by. A combat encounter in which the future of the game may pivot, beyond a single character death.

There are many portrayals of such combat in all forms of media: The Siege of Mordor in Lord of the Rings, The Battle of the Trident in Game of Thrones, or even Macbeth facing off against Macduff in the timeless play Macbeth. It is easy to see that these fights, while spectacular to behold in those mediums, would end up down-right boring if you transition them straight to your favorite pen and paper RPG. Can you imagine a group of 5 people “focusing fire” on Rhaegar Targaryen from a distance? It would be so very sad.

These five questions are the complete backbone of writing a centerpiece combat encounter. Without all five planned for – there is absolutely no way you’ll be able to create a situation in which your party will immerse themselves and be lost in the bloody moment. When reading these, try to think of what fits in your game.

Who? are they fighting? Which person or group of people matter to the party? Tie this fight into the story as much as possible by using an NPC or creature that matters to one or more members of the group. While you may be tempted to keep your bad-guys safe and sound until you need them, I urge you to put them in front of your party multiple (at least 2) times before the centerpiece fight occurs. If they die to the party immediately – they should do so! Stronger opponents will always arise. They need to be seen multiple times so that the players can have a chance to know…

What? is going to happen? What makes this fight not another bar-room brawl? Your centerpiece needs to have an actual reason for happening as well as possible outcomes for when the party succeeds or fails. Your players, despite what you feel, will always gravitate toward: Why fight if you can simply bypass the problem? A centerpiece battle should not rely on your players’ bloodthirstiness to actually occur. There should be a dire repercussion if they choose to ignore the engagement: The witch that has defeated the investigators before will finally summon Shub-Niggurath and unleash her thousand young on the world. If she is simply thwarted, she’ll try again and again until she is successful – killing her is the only way to stop it. Luckily the investigators should know…

When? will it happen? It should never be “A green dragon swoops down! Roll initiative!” Instead, have your players realize the fight is going to happen long before they actually get there – let them brood over it, think on it, and prepare themselves for action with agency. Surprising them with a fight can work from time to time, if the NPC or group they are facing is well known or betrays them, but otherwise it ends up feeling like a random unrelated incident, unavoidable and bland. They might track their arch nemesis, a green dragon that destroyed their home-town to its lair, searching for vengeance. The dragon knows this too, but cannot and will not simply leave – instead it prepares itself to finally crush those who would stand against it. Your party, in turn, must prepare for …

Where? will the battle ensue? The battleground needs to be memorable or interesting; important to the party, the villain, or both. A random speck of woods simply will not do. Think thematically – A vampire’s lair in a long unhallowed church. An ancient looking pirate ship, moored on the sandy beach of an island east of the Bermuda triangle. A player character’s own home, where their fiercest enemy has tracked down their family and held them hostage.

Why? This one is for you, actually. Why make this a centerpiece battle at all? If you cannot think of a reason, don’t force it! A centerpiece fight takes some planning, but should feel organic to your players. If you can tell yourself a good reason, a single good reason, then get out a pen and paper and lets try to make it happen.

Once you’ve got your important reoccurring NPC or Group of NPCs, your intended outcomes, your appropriate time, and a cool battleground – and you are sure an epic confrontation is in order – you need to start planning out logistics.

I’m more than happy to help any of you with this on a personal 1 on 1 level through Twitter or Facebook, but I am going to keep this as system agnostic as possible for this post.

I know this isn’t a paint-by-numbers schematic to build an epic confrontation in your exact chosen system. It does take some trial and error to pull these things off. If your players are never-fearing damage-output robots, sincerely don’t bother with all the above. But if your players have an investment in the story – in some opposed NPC that has long haunted them, a centerpiece combat encounter could be as memorable as anything else you do at your table. Seeing the fear and anxiety morph into surprise, intense thought, and finally joy is too perfect to pass up.

As always, leave a comment, contact me on Twitter or Facebook and tell me if this article helped you at all. If there are enough requests for a certain system, I’d be happy to dish out specifics.

The party hears of a massive cloud of darkness that descends upon Vallaki. They evacuate who they can to the church at the far westward side of town, hoping to make a last stand there.

The cloud of darkness swarms with fierce wolves, zombies, and the piercing red eyes of vampire spawn, enthralled agents of Strahd von Zarovich. The party ushers everyone inside the church – where they pray in the hollowed ground above a long dead saint’s bones – no undead can enter that holy place, and so the party only has to focus on killing the animals, while protecting the few townsfolk that have not made it to the church yet.

The battle is fierce, but with a holy shield, of sorts, at their backs – the party laughs and rejoices as the wolves and zombies are taken down by their arrows and spells. Maria, the Cleric of Selune, on guard as ever, senses something is amiss – and looks inside the church when she hears gasps and worried whispers.

An ex-companion of theirs, a black scaled dragonborn named Kriv, has pried up the floorboards and wrenched free the saint’s holy bones. Before Maria can get the attention of the party, Kriv teleports the bones away – and the darkness descends on the church!

The party scrabbles now, fearing for the safety of the twenty or more villagers inside. While the fighter protects the front door, the ranger throws himself in front of the windows – taking a very rare amount of damage. The bard casts some spells or something I think, no one liked him. The five vampire spawn leap from the darkness and begin frantically attacking the party.

Maria and one of her closest companions, a Paladin of Bahamut named Ceaser (c-e-a-s-e-r), confront Kriv, ready to end him. Kriv has other plans and readies a Fireball to cast at his feet – the party, well aware of the spell, realizes the villagers would all be consumed by the flames, and they stop. Kriv screams out at the party “You left me! You sent me away.  Me!” After a short pause he continues, “Well I’ve found new friends… and they are more than welcome to come inside.”

Now free of their forbiddance, the vampire spawn try to scrabble inside the castle. Seeing few options, the paladin whispers an oath of vengeance against Kriv, and uses a Misty Step to teleport behind him, and risks all their lives on his ability to break Kriv’s concentration by grabbing him. The dice were in his favor, and the spell was broken.

The villagers flee the church out the front door where the fighter successfully fended off the creatures, and the party attacks in earnest. Kriv fights for one round, but is hurt viciously by his previous companions. Knowing he can not win the day, he uses Dimension Door to flee. The few vampire spawn remaining, having tested the party enough for Strahd’s pleasure, flee back into the forest, and the party is left victorious to tend their wounds and seethe in their hatred of their new-found enemy.