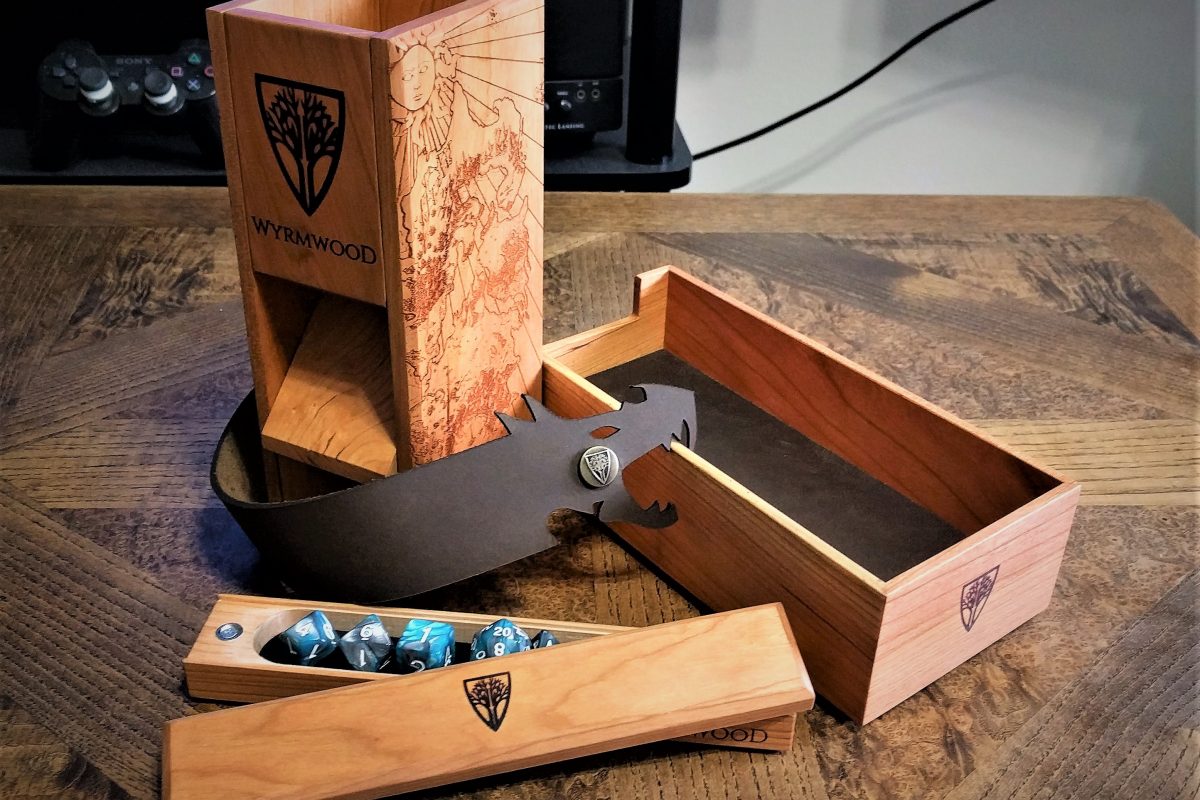 It’s been over a year since we took a look at the Complete Dice Tower system by Wyrmwood, and in the wake of their new Kickstarter … I have such sights to show you…

This is, again, a complete system. Everything you need for your dice-fueled hobby other than the dice themselves. 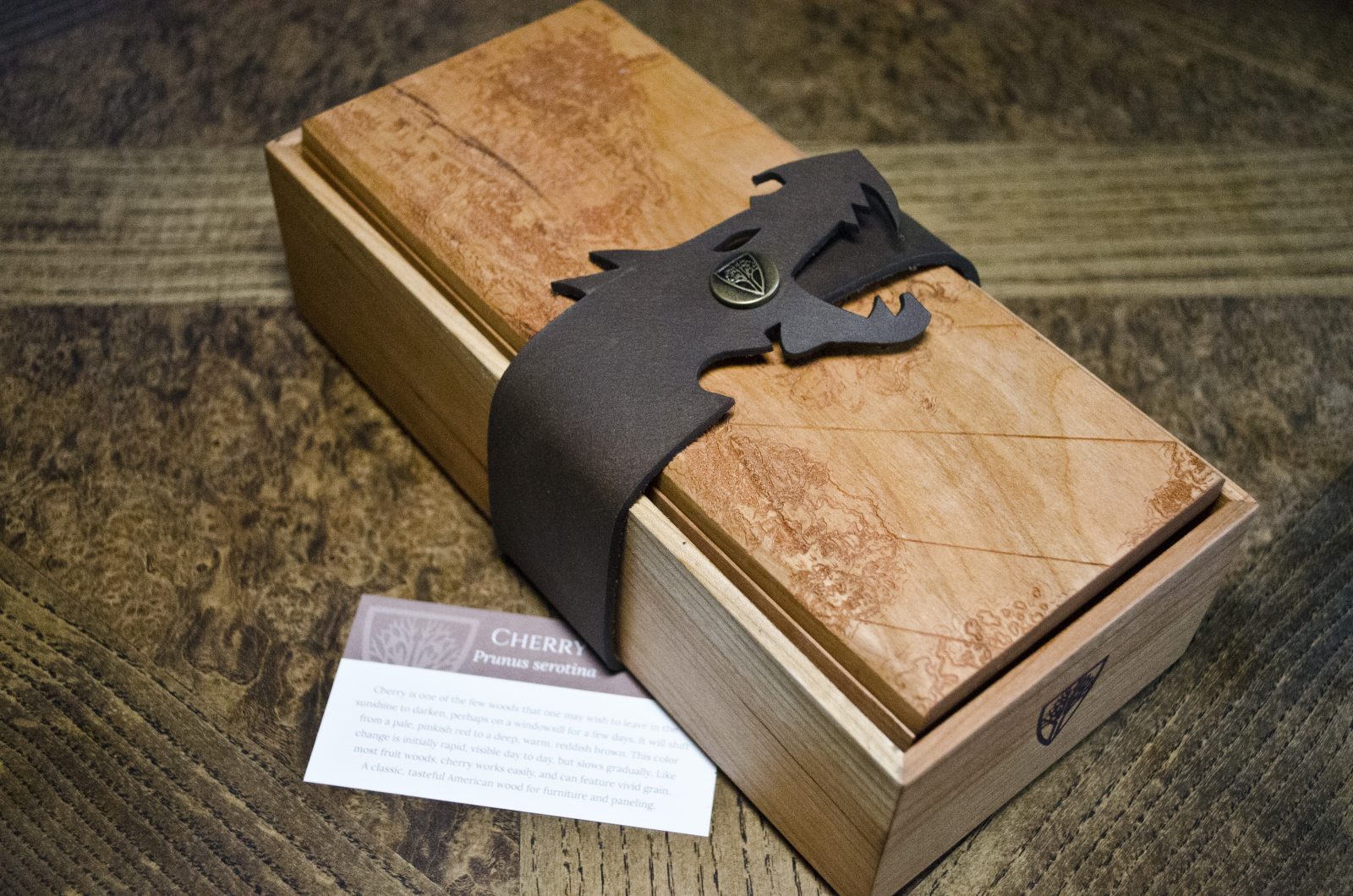 All the components still fit together into a tight, beautiful package. The difference this time around is a whole bunch of little things that add up to a completely massive redesign.

Let me take a moment here to say – in my previous review of this system, I advised people to position the pieces differently to allow for the system to sit more flat and securely – and it is with my completely astonishment that Wyrmwood has addressed my concern from the ground up so that no matter how you assemble the system, it’s flat and secure. Whatever way looks best for you – that’s exactly how you should store it this time around!

We’ve looked at several dice vaults from Wyrmwood: Mahogany, Red Oak, and Zebrawood, and each time I had no complaints. So what’s new this time around? 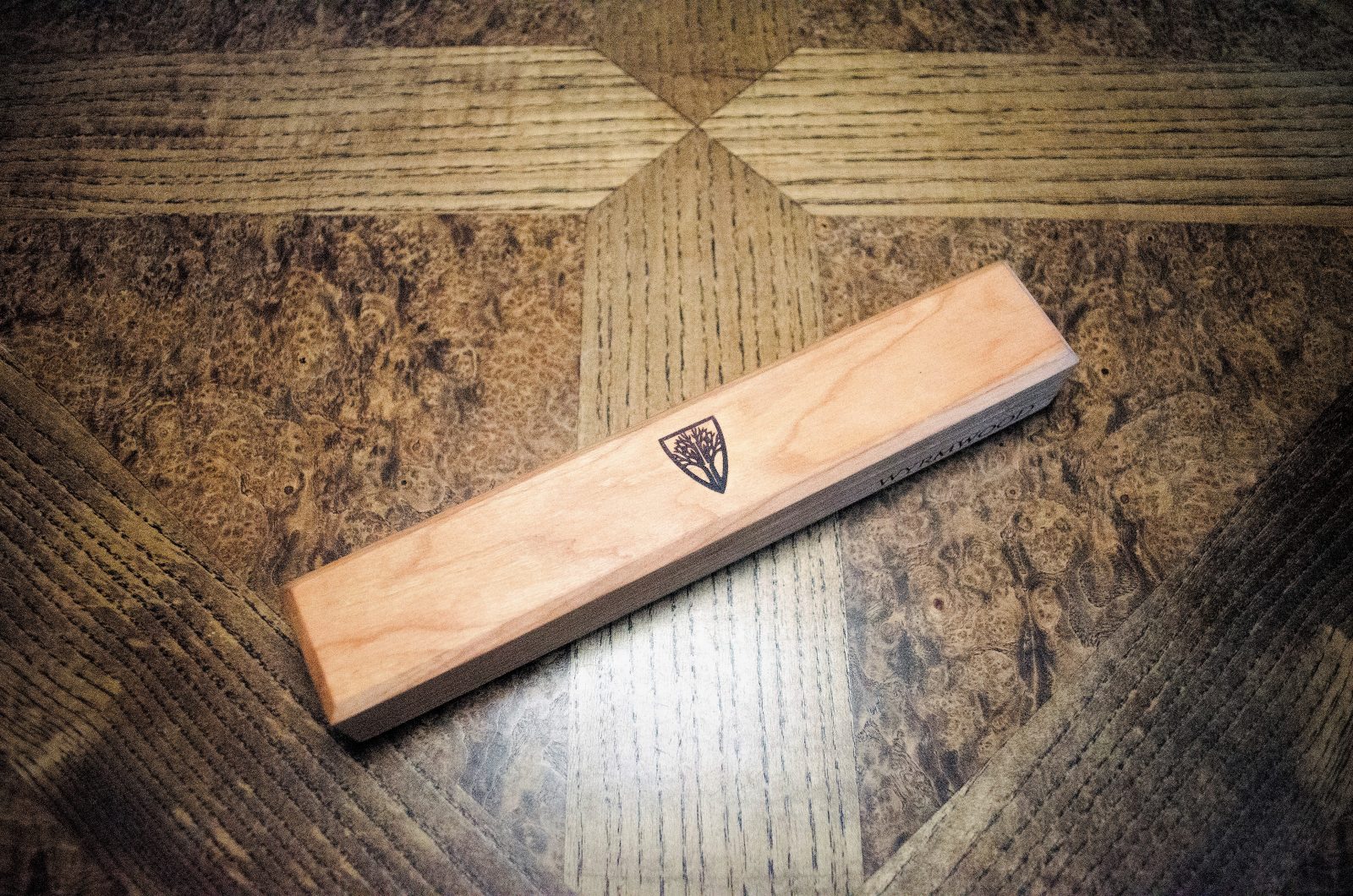 First up, the silky smooth finish remains from previous iterations, but the box itself is just a little cleaner. The edges/corners seem to be planed more precisely, the heat-branded logo and text, also, are more clean and dark. 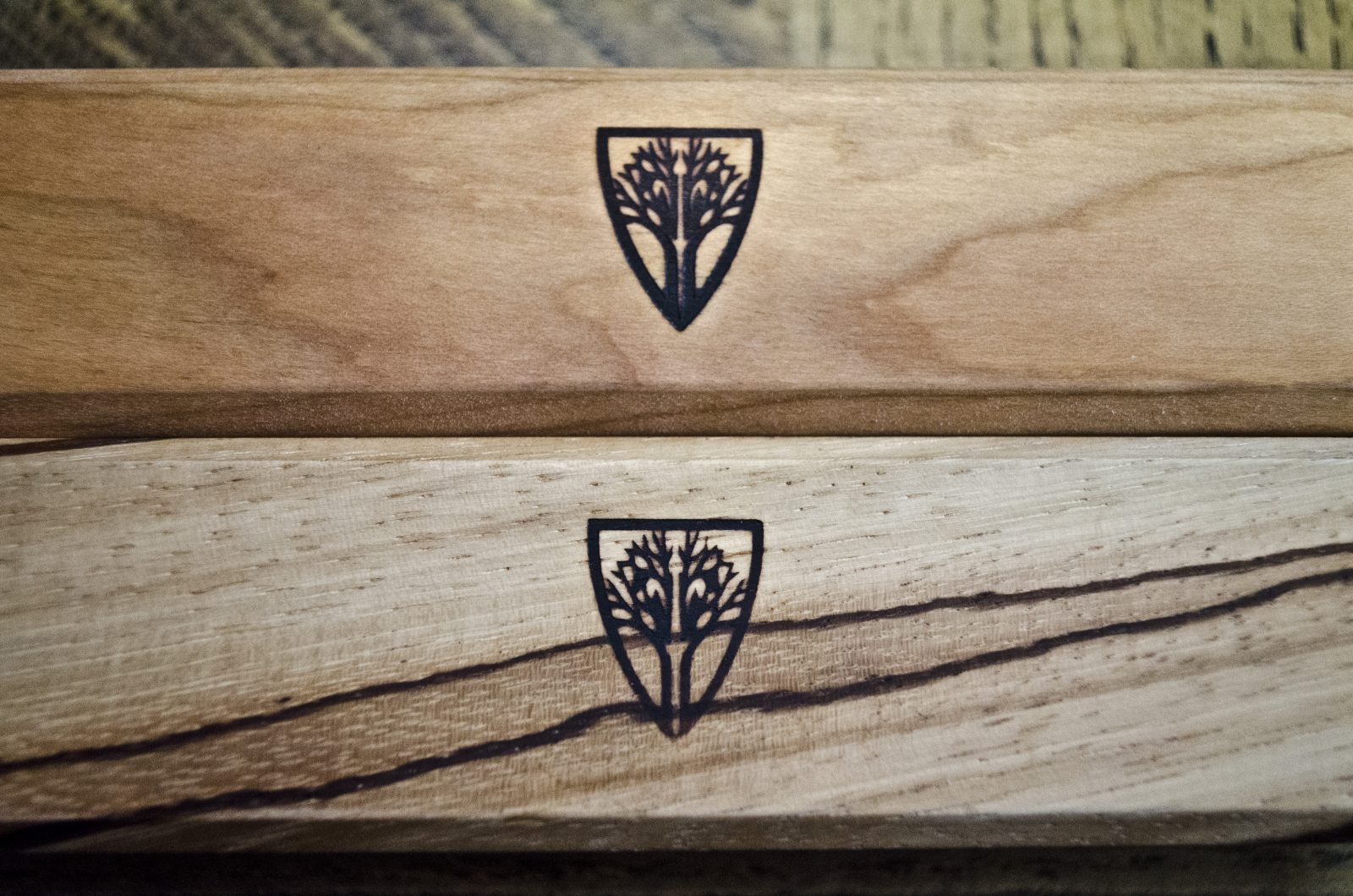 Note the crisp lines and full shade of the Cherry dice vault (top) compared to the slightly thinner but more skewed logo of the Zebrawood (bottom). A lot of these variations are due to the hot-air on hand branding, but you can see the practice coming into play.

Another big change is the interior lining of the dice vaults. 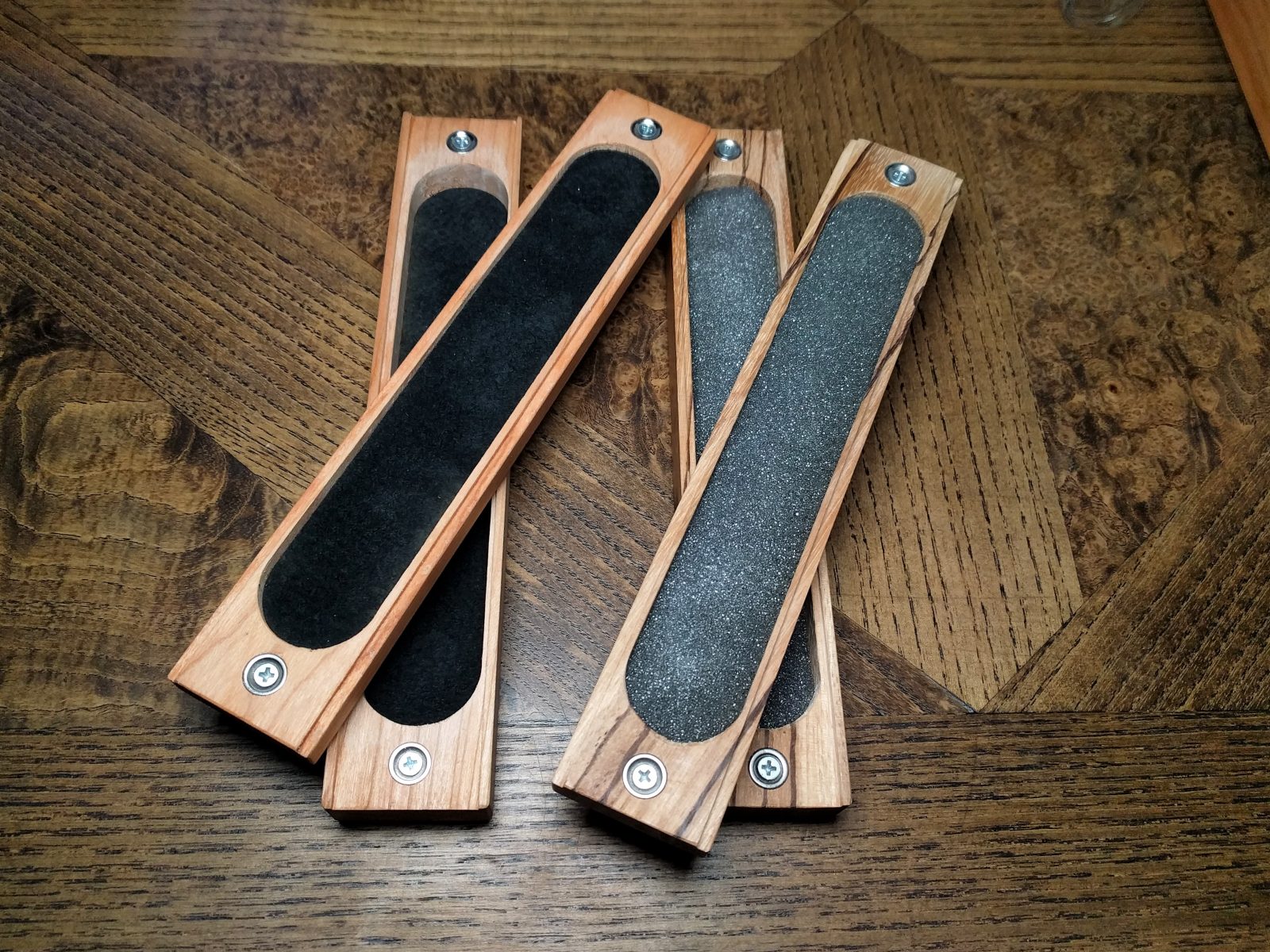 The foam insert (right) was appreciated, but often they would crumple, smush, or ride along the sides of the wood, causing them to get a little unsightly after a time. The new felt lining (left) is extremely dense and makes for a more sleek appearance. Likewise, the dice vaults seem to sport a more refined and even cut (note the corners and the lines of the grooves in the cherry dice vault). Overall, the dice vaults just feel more polished – proof that Wyrmwood is taking these small feedbacks in stride.

Once the “black sheep” for being a similar cost with less real estate, these personal dice trays have become a hit among a great many people. 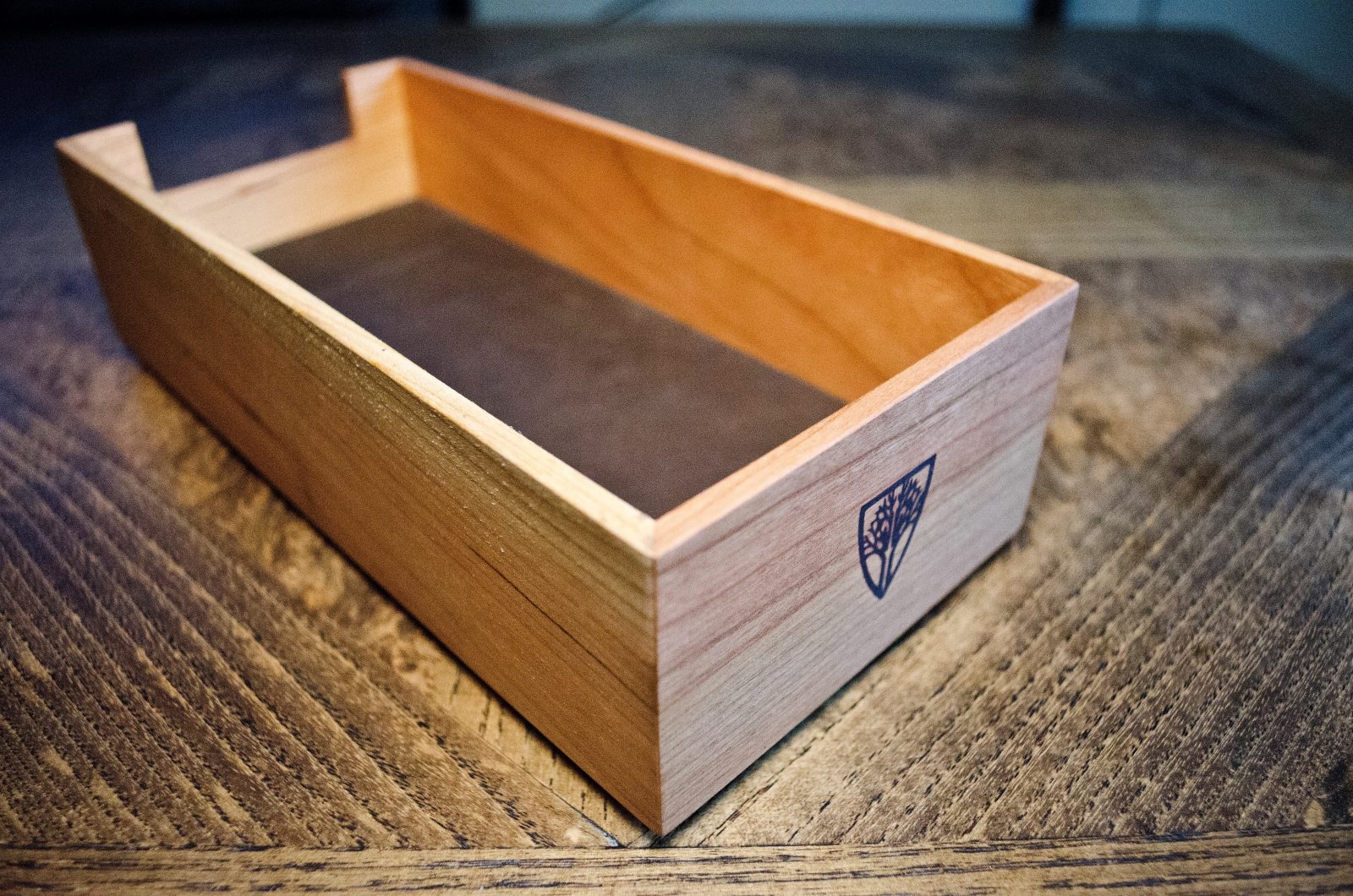 The beauty of the personal dice tray is in the size – just large enough for a single person, including a DM behind the screen, to house and roll up to 3 sets of dice (I do it constantly). Lined with buffalo leather, these things exude luxury.

Again, I’m working on a theory here – as this tray measures ever so slightly larger than the previous iteration in both dimensions – that some time was put into the thickness of the wood used in the surround as well as a better fit, overall. However – do not take this to the bank. Last time we measured a zebrawood dice tray. At nearly FIVE TIMES the cost per square foot, it is an exceptionally more dense and rare wood. What I do notice here, comparing the two, is that the cherry box looks more angular and sharp, just like the dice vault. The edges seem more straight and refined. Crisp would be a good word to describe it.

Likewise, their treatment of the leather interior is much improved – especially in regards to the company’s minimalist branding. Just look at these two and notice how much deeper and more refined the new Cherry box’s insert is compared to the Zebrawood version from last year?

The big guns. This thing is a marvel to behold. Internally, the towers are the same as we saw last time: several lengths of these exotic woods all hand-crafted to fit together with seated, glued, and sanded magnets. If you’ve ever tried to line up two holes in adjoining wood without drilling through one of the pieces, you’ll never understand just how impressive this feat is. 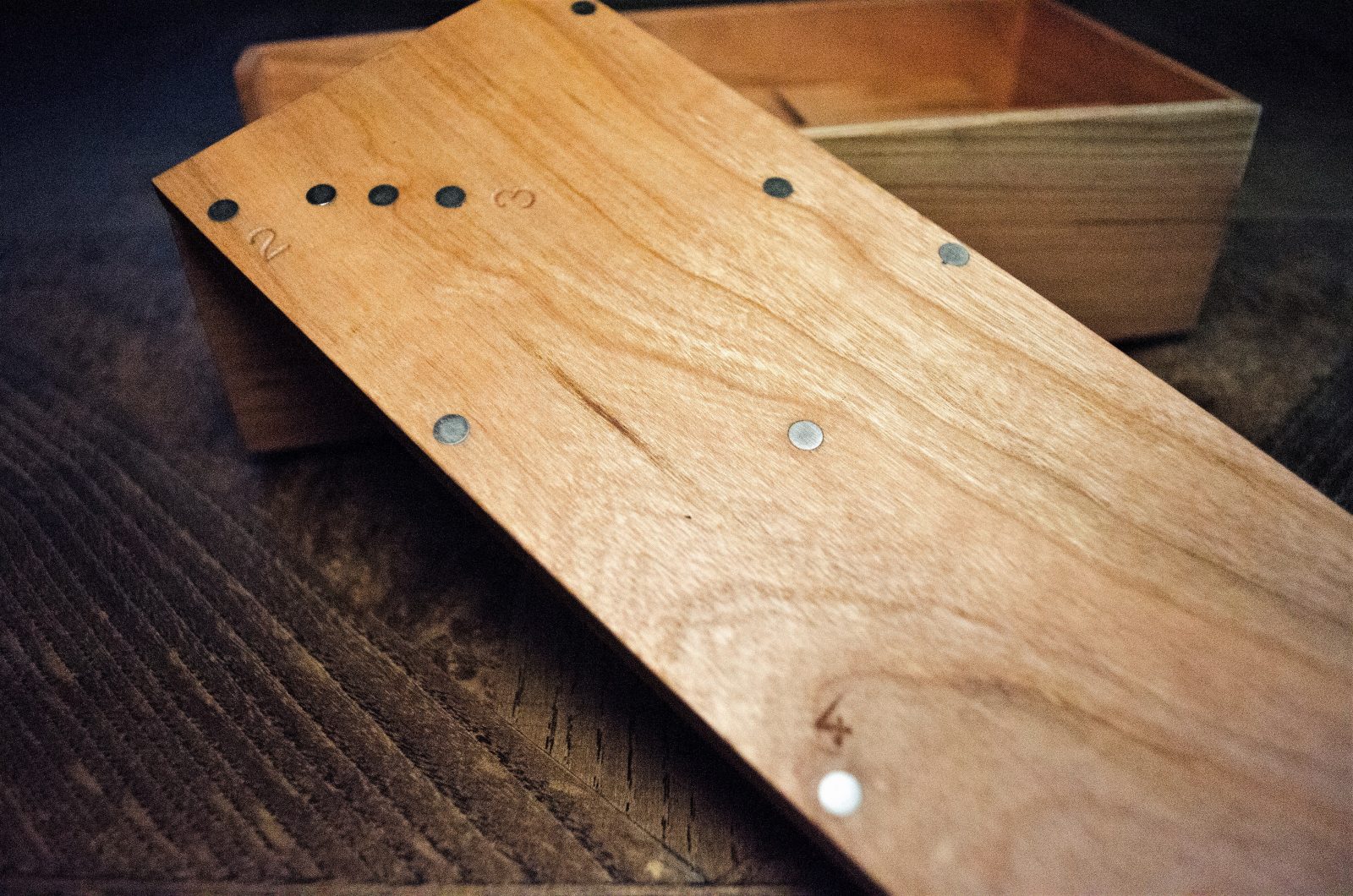 On the inside of the side panels, it looks like Wyrmwood has taken a little more care to make sure the numbers are cut deep enough to be legible. Each magnet, as well, is seated a little more firmly. I think it’s just benefits of practice, but it should not be ignored. Once you snap on the internals, things look pretty much the same as before: 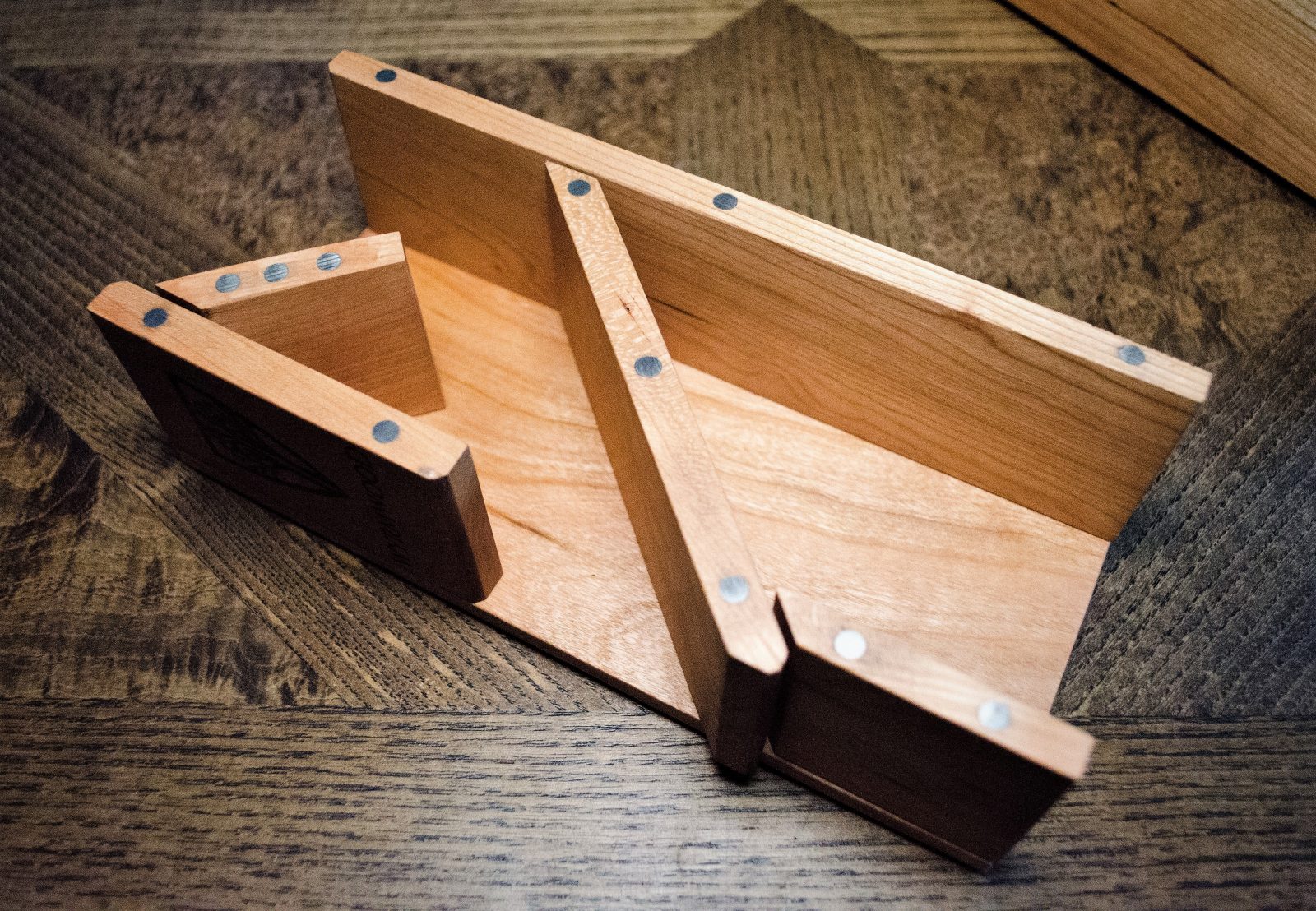 There is a little difference, though: everything seems to snap together a little more easily. They’ve given themselves a bit of clearance between the pieces – as no one piece is responsible for the structural integrity of the tower – so the whole thing has some room to breathe. It just feels a little more precise in how each piece fits together. The angles all look great and feel great. Good job. 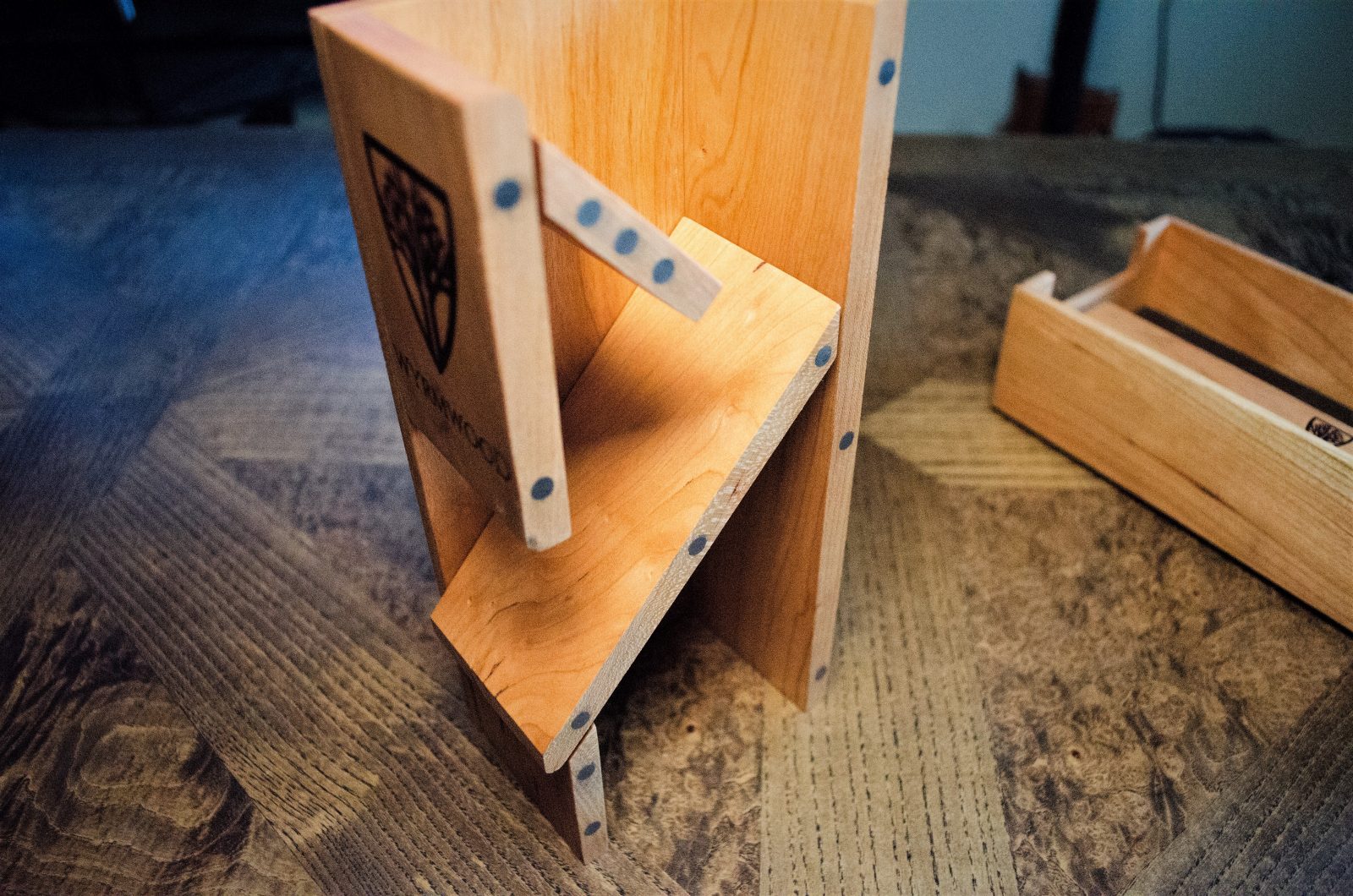 As we all know, the dice are loaded in from the top, tumble down the slope (#3) then down another slope (#4) before being vomited out onto the tabletop or into the personal dice tray – which is built to have that u-shaped opening to perfectly align with the tower.

What will really grab you… are the sides, my friends… Where we had beautiful expanses of beautiful wood, you can now opt to have an entire landscape laser cut into the wood panels! 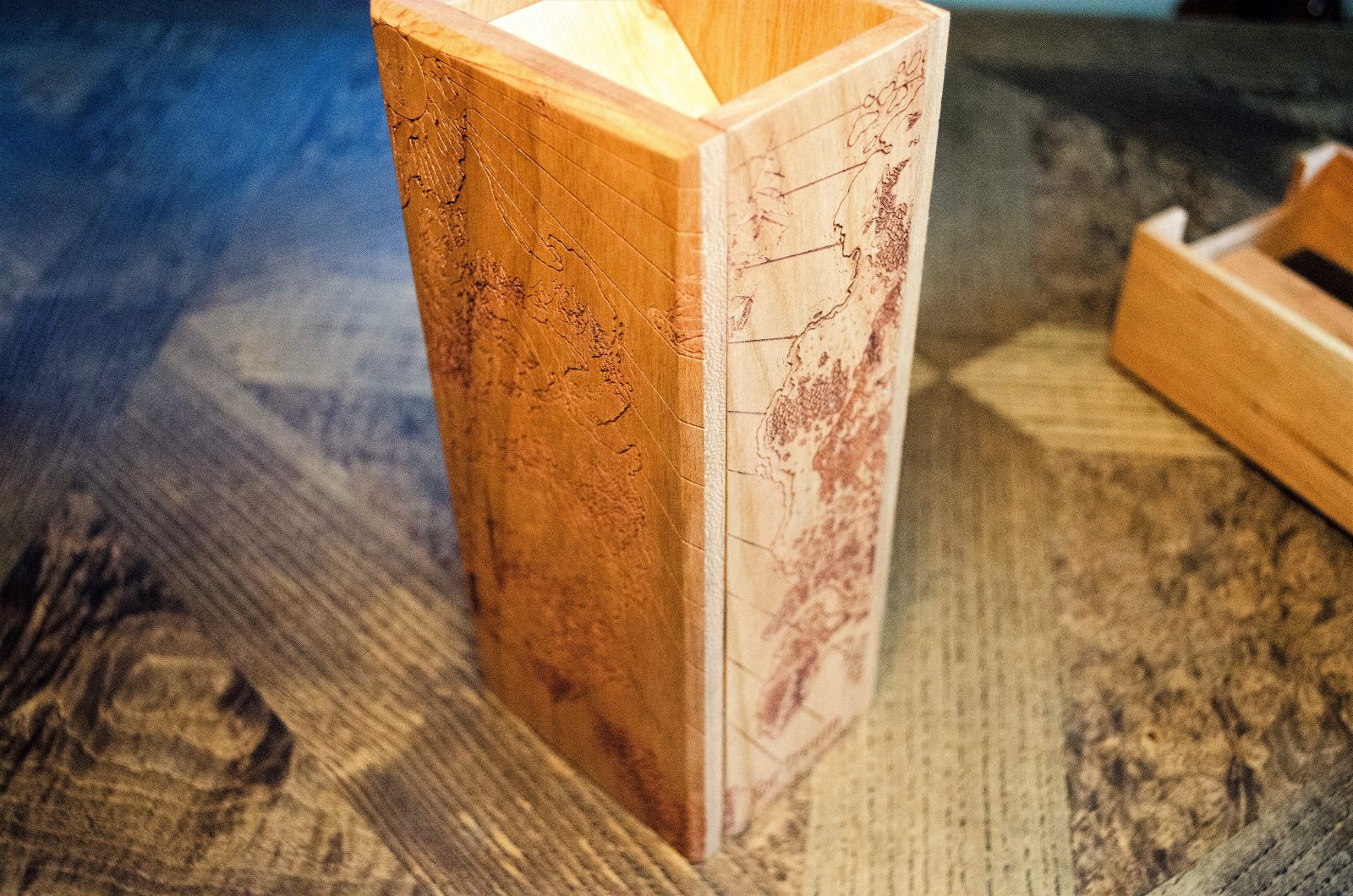 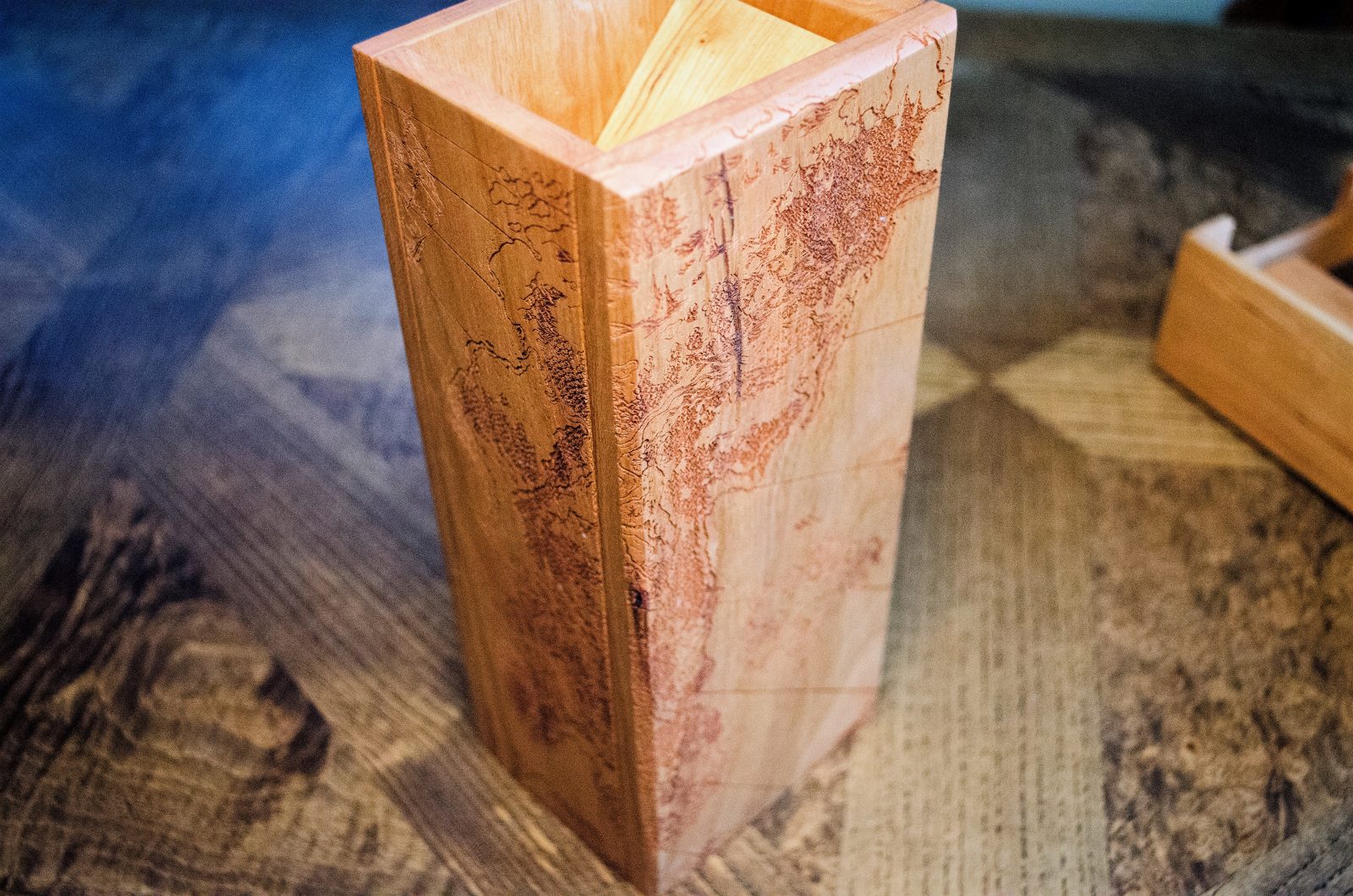 At first I was a little nervous when I was told that laser etching would be a big part of this relaunch – but when I finally got a chance to see it, I realized how cool of an option it really was. 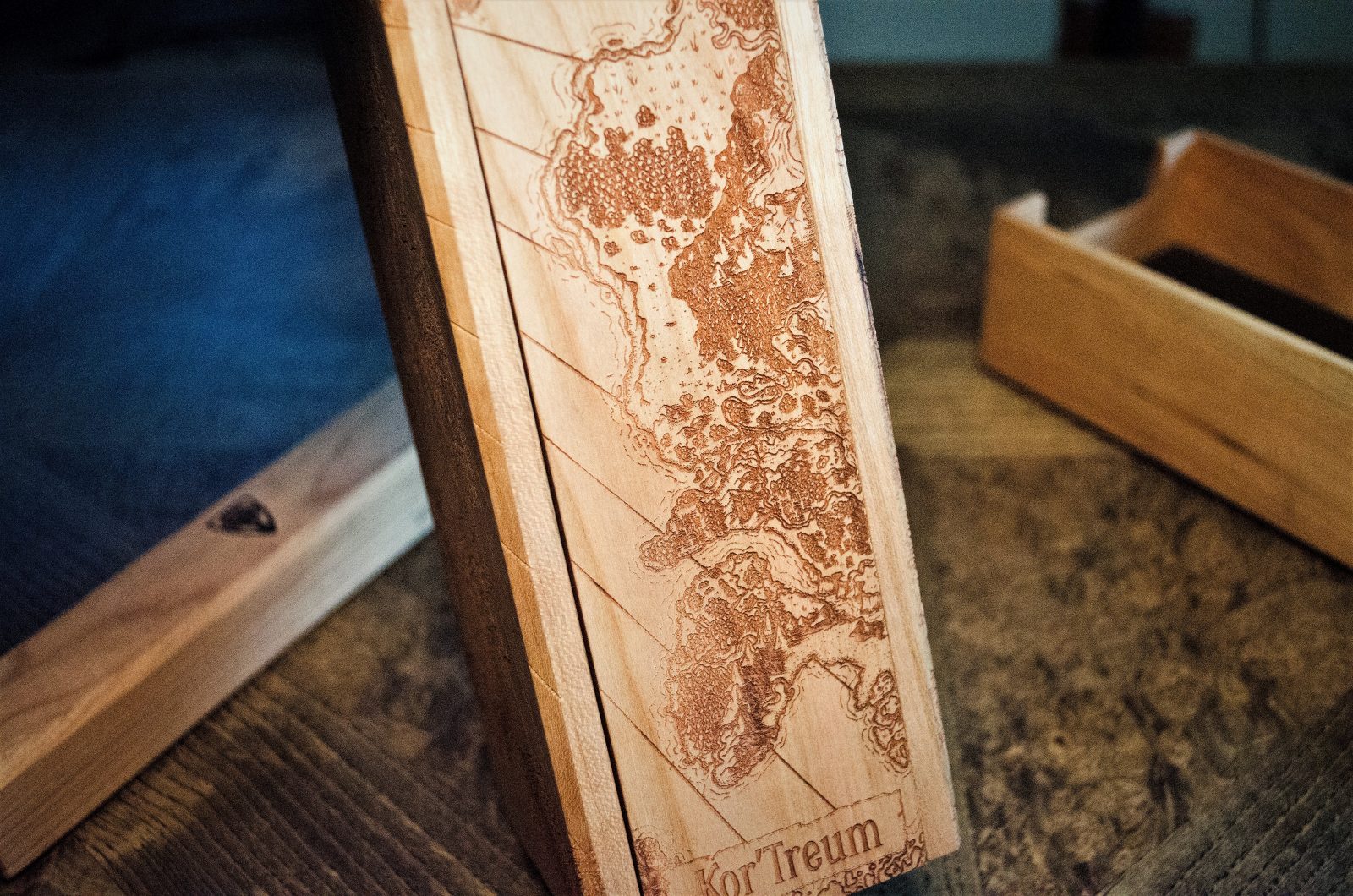 They aren’t disjointed or staggered strangely – it’s one entire piece, cut into thirds and wrapped around all sides, giving this continuous feeling. 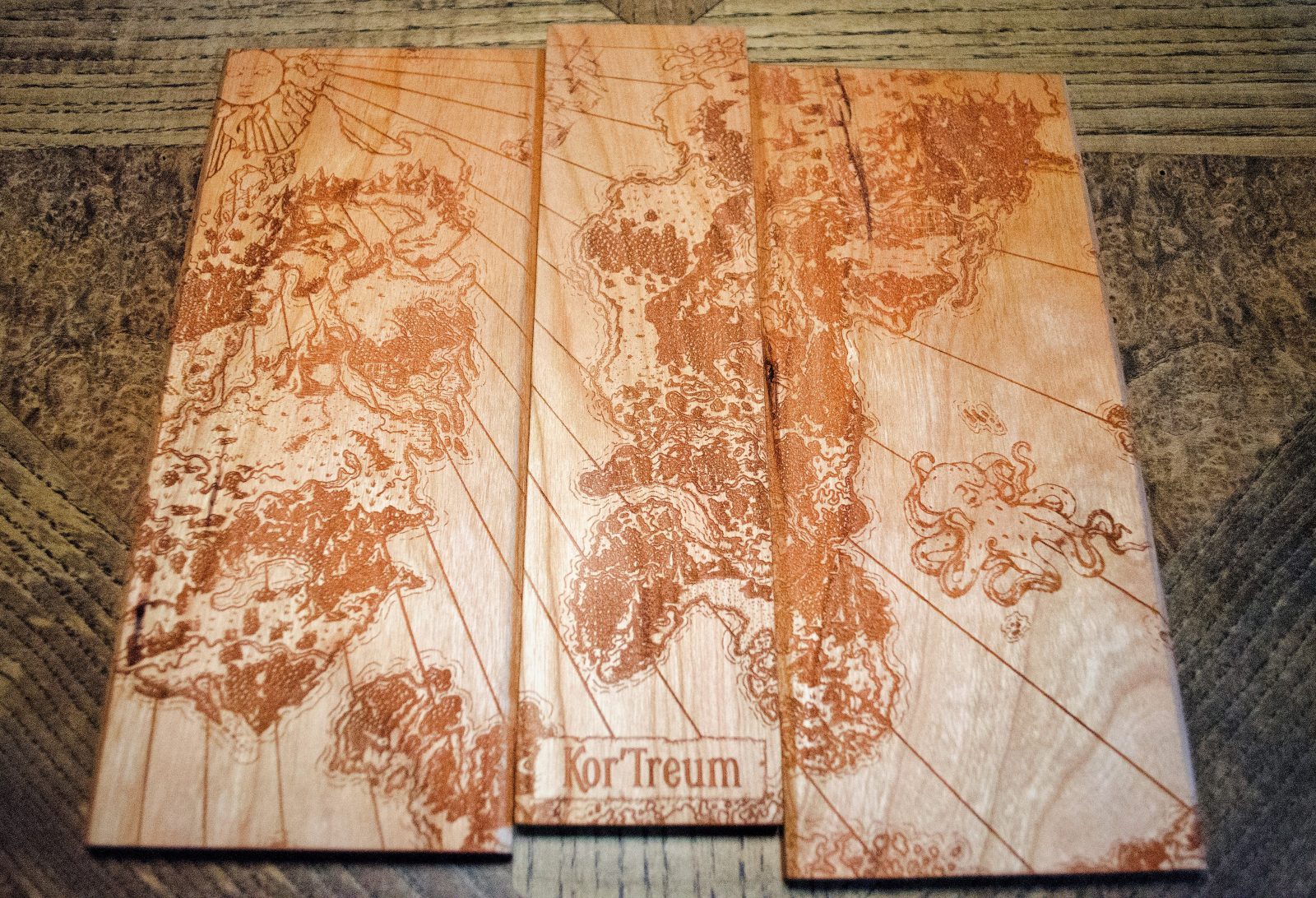 The transition, of course, is not perfect between them – but the etching even wraps around the beveled sides of the panels. (For you persnickety folks out there, i’m sorry they’re not aligned perfectly – the magnets that snap them together do not care what you or I think, trust me) 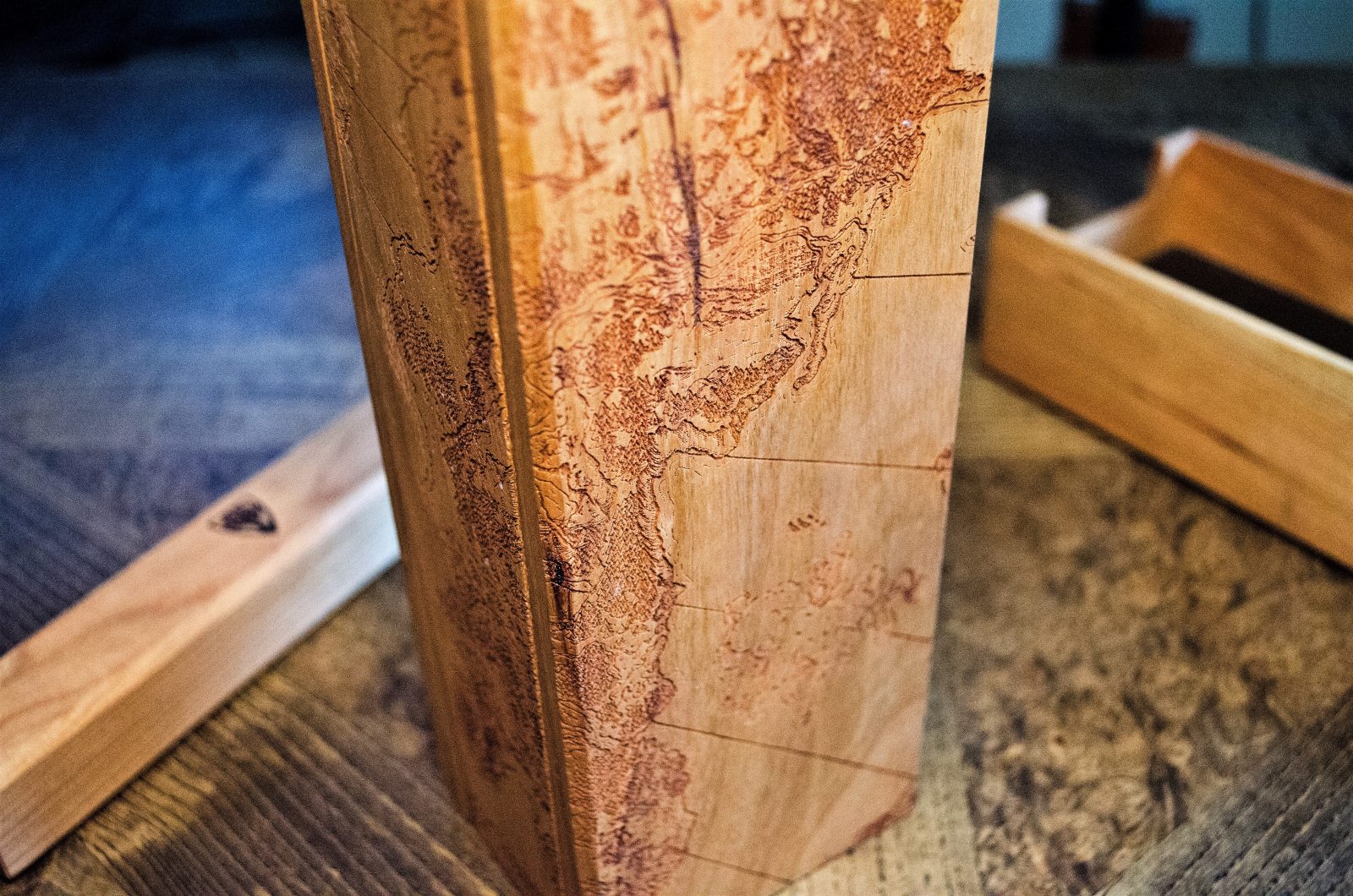 That little turn is everything – it leads the eye across these wide expanses onto the next panel. Anyone familiar with Critical Role may also be familiar with the map maker of this piece: Deven Rue of Rue Ink! I’m unsure if other artists will be slotted to make some art in the future, but the sky is the limit if the requests are vehement enough. Instead of blathering on and on, i’m going to absolutely flood you with photos of this incredible laser-work. So just keep scrolling, my friends!

For those of you curious – here’s the step-by-step of how the system fits together. It all starts with the:

Add dice vault to one side

Snap the two wide sides together, put em on top

Very compact, very portable, and gorgeous. Particularly now that the sides can have laser etched craziness on them!

But keeping the whole thing from shaking loose? This beauty. 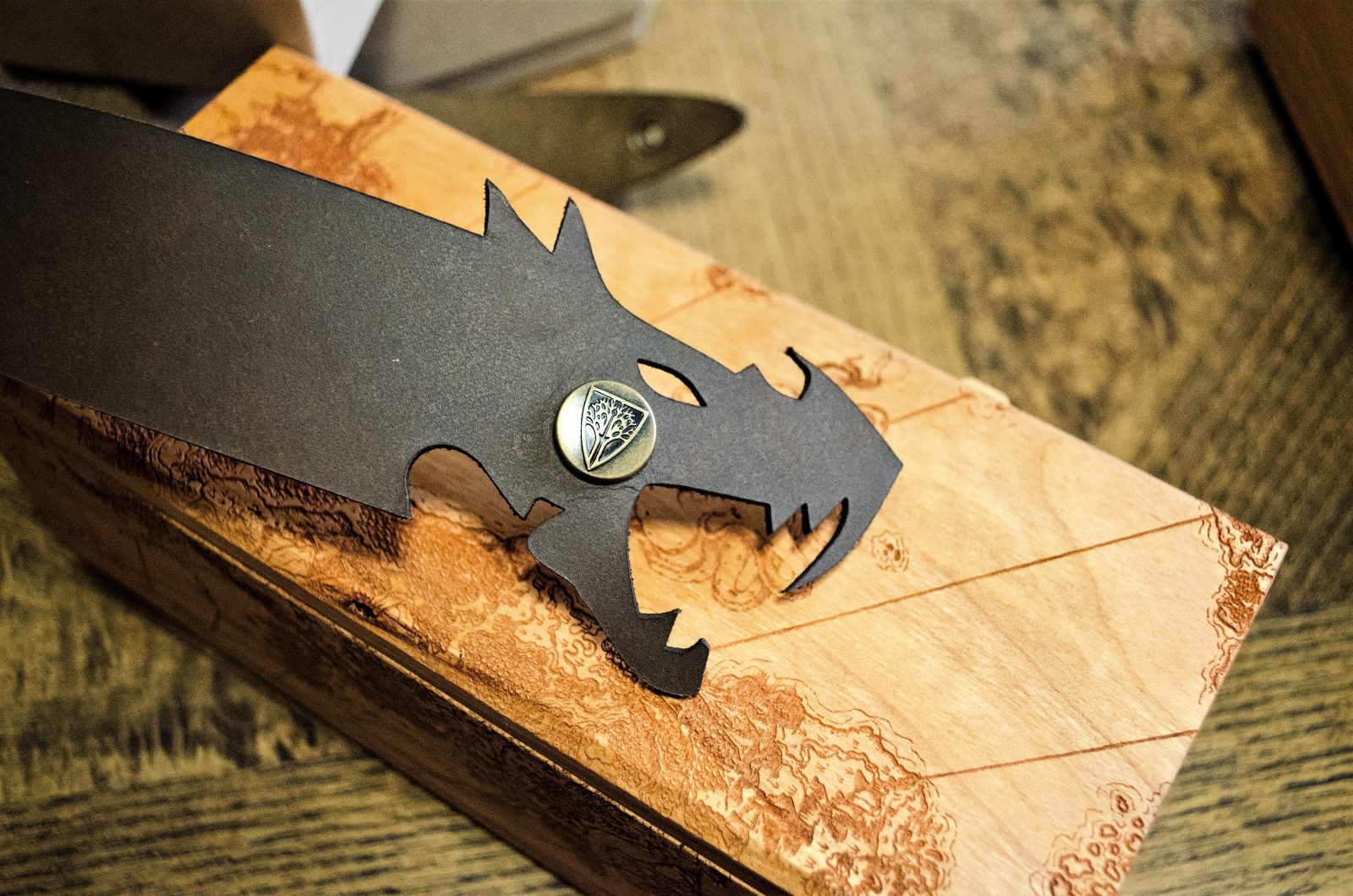 A buffalo leather strap with a very tight snap-button. Now, these things come with cool designs on the ends! Just another customizable option for each one of us. 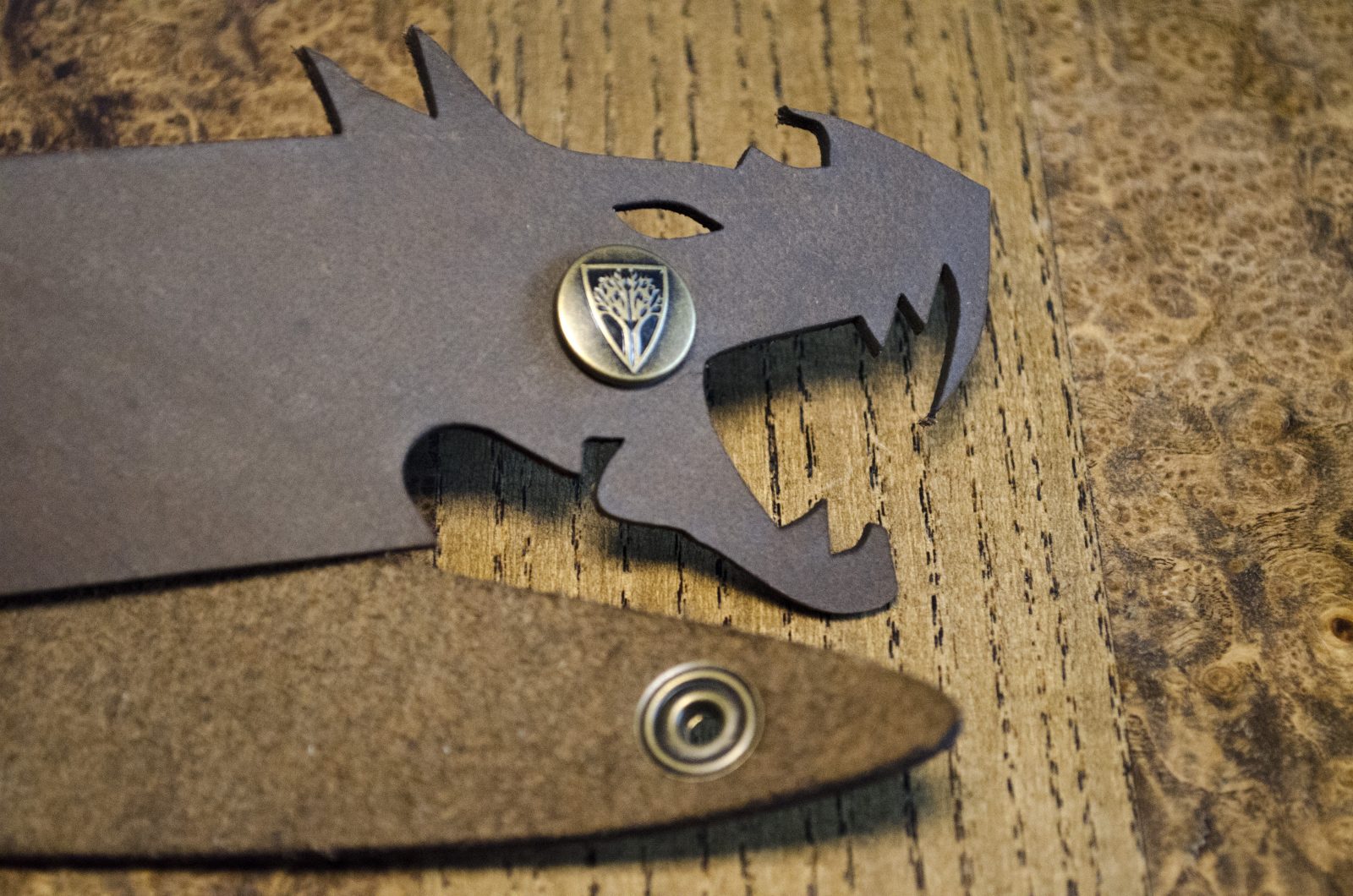 This one, unless my eyes deceive me, is the Draconic profile. The opposite end tapers off to a point to signify the tail. There’s a cool symbolism here that hasn’t been lost on me… the ouroboros. A serpent or wyrm (not dragon – there’s a difference) eatings its tail, a perfect circle, symbolizes wholeness, infinity, the natural recurrence of the world. My recurrence here, to this dice tower system. The wholeness of the system in its entirety. The infinite struggle of improvement – chasing perfection, but never attaining it. The singular beauty of the cosmic flow of eternity, looping ever onward – or it was what they had lying around that looked cool! 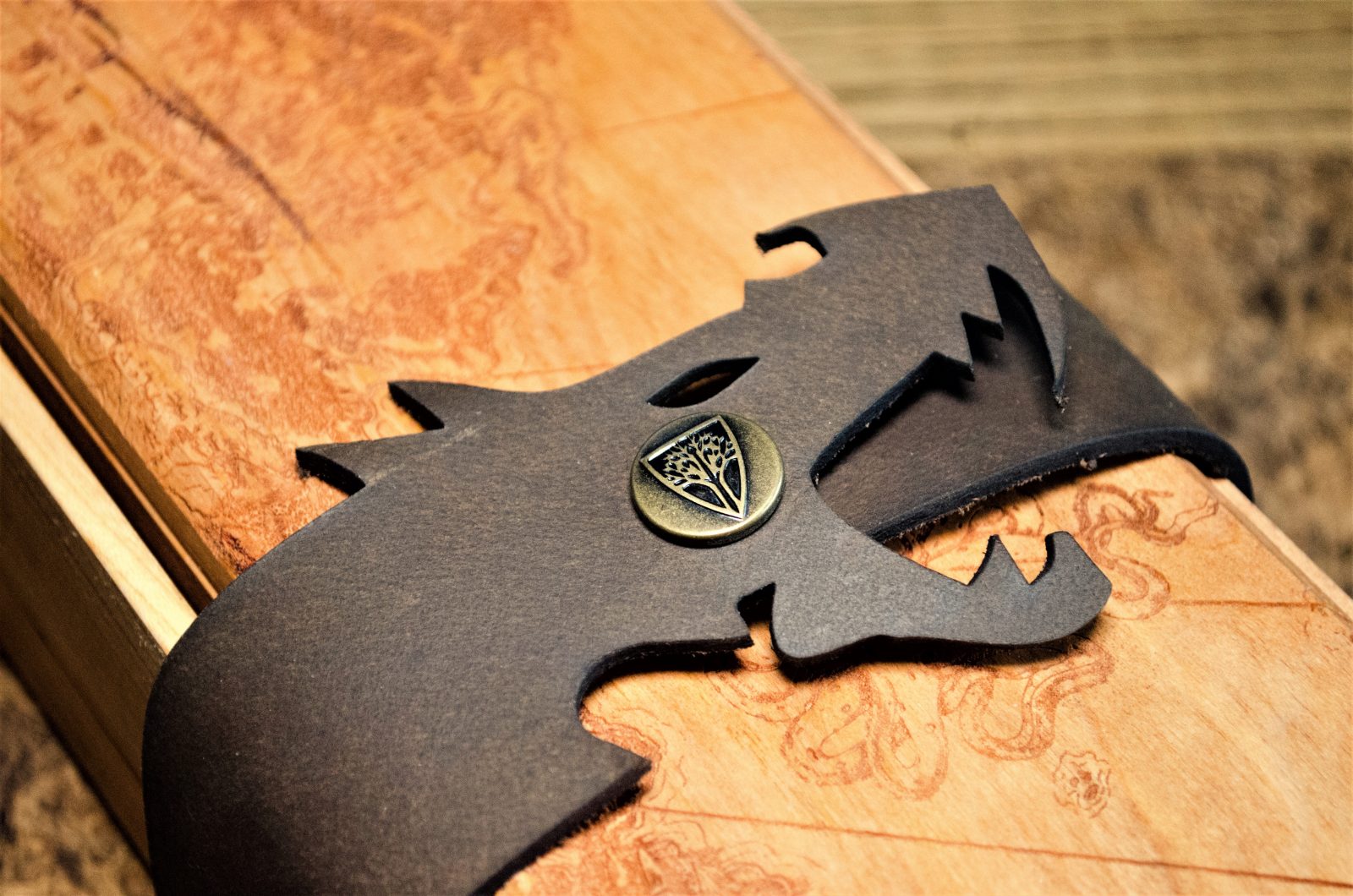 Transcendence aside, I think these things are pretty cool. I’d not say they add a lot of luxury to the system, as these leather straps are generally considered an afterthought, but people are absolutely bound to noticed them, and collecting them all could be a pretty cool idea – like choosing a new tie every day for the same exact white shirt: it can add some artistic license without making you buy a completely new system. And having a dozen of these peeking over the edge of a bookshelf full of wyrmwood gear would be pretty radical!

I only saw one flaw with this system. And it’s one I griped about last time i reviewed these: a slightly askew bottom panel! 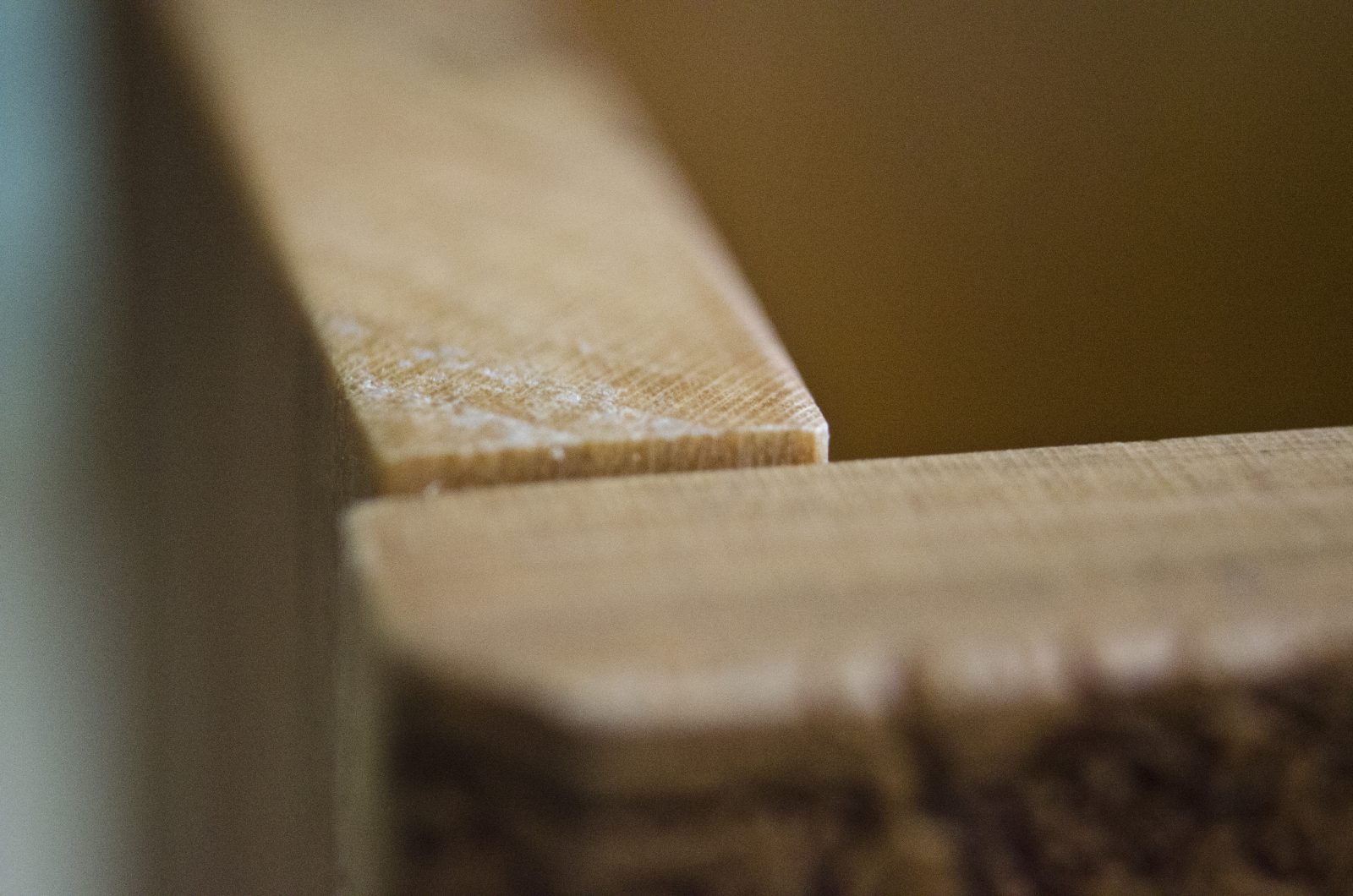 Is this a small gripe? Of course it is. I had to use a Macro lens just to get it framed in a shot. But it’s the BASE of the dice tower. The tower still sits flat and square, because (as I pointed out earlier) the new design allows for some space between each panel – so the magnets float a bit, letting the tower settle onto the surface it’s put on. I think it’s a brilliant design choice, and I think it deserves praise. However, the two most problematic panels of the entire system are always the top (you see it all the time) and the bottom (it makes a cheap rattle whenever you move or place the dice tower). I’d love for more attention to be paid to those two panels moving forward.

This is… It’s just a solid improvement in every way. I know that the kickstarter will only highlight a few things like wood selection, leather profiles for the straps, cool maps to laser etch onto the sides – but the entire product feels better this time around. It was already fantastic, but they’re constantly pushing things a little further, to be a little better. To keep on improving, and for that I commend Wyrmwood a thousand times over.

I sincerely believe that if you are on the fence about buying your first (or buying an additional) dice tower system, this kickstarter is your time to jump in. If this model is at all what you will receive, I promise you, it’s worth it. It’s so worth it. When you have it in front of you, you realize there’s more going on than I can articulate here or even photograph well enough to show you, though I tried my absolute best. The corners are more crisp, the lines seem straighter and harder, the edges sharper but still sanded smooth as silk, the finish is even well treated, the leather is more supple and better fitting, the laser etching and burning is crisp and wonderful. You guys, this is just a solid improvement in every regard.

Keep an eye on these. There’s no way any of us could make one of these for five times the cost it takes to buy one from these impressive craftspeople.

Edit: With the kickstarter now live – there are in INSANE amount of options to choose from – hundreds of combinations. Go check them out! 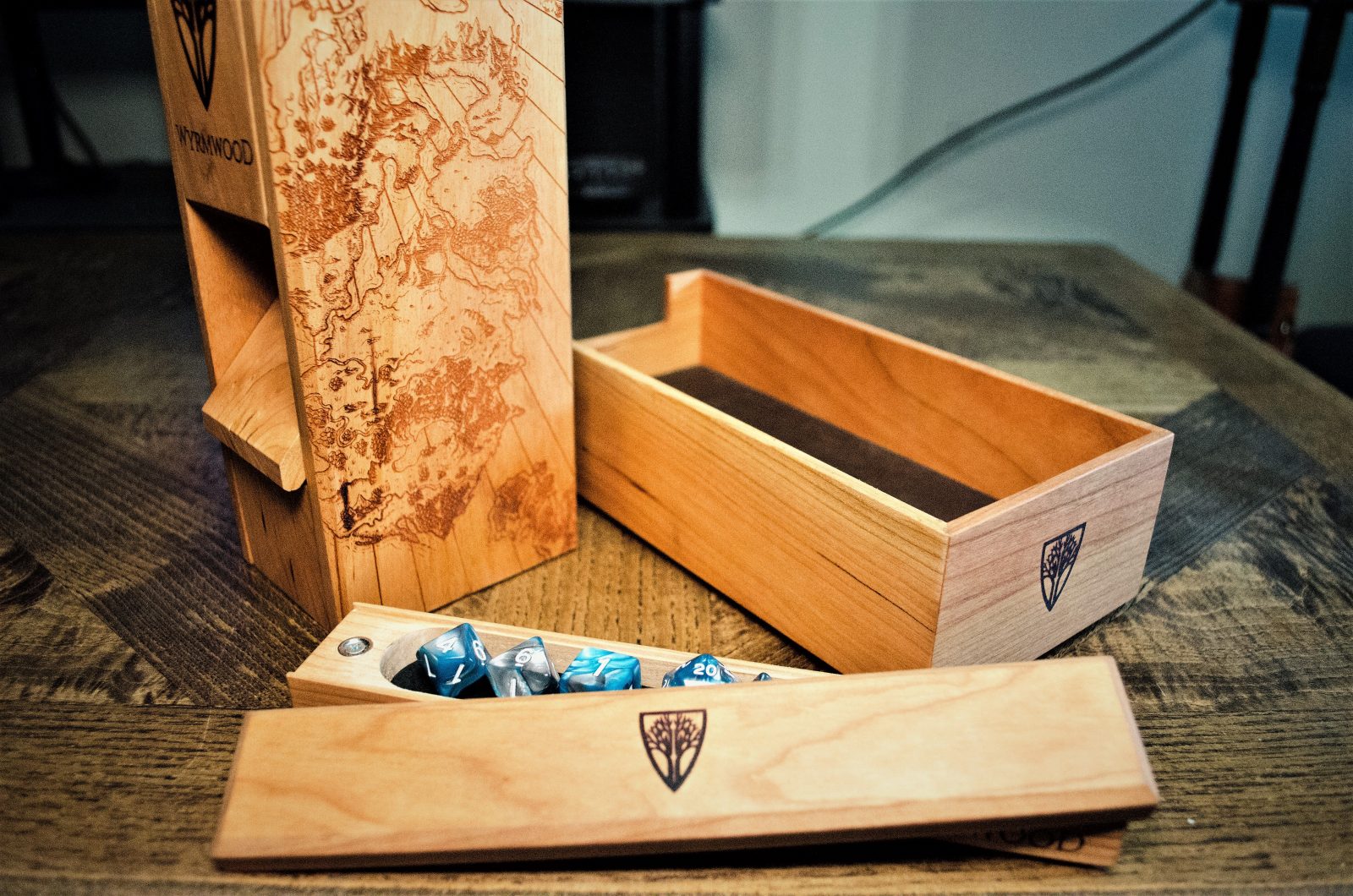 I don’t always advocate rolling, but when I do… be sure you have to Drop the Die.
Review by JB Little, Follow me on twitter for more product highlights and dice giveaways!