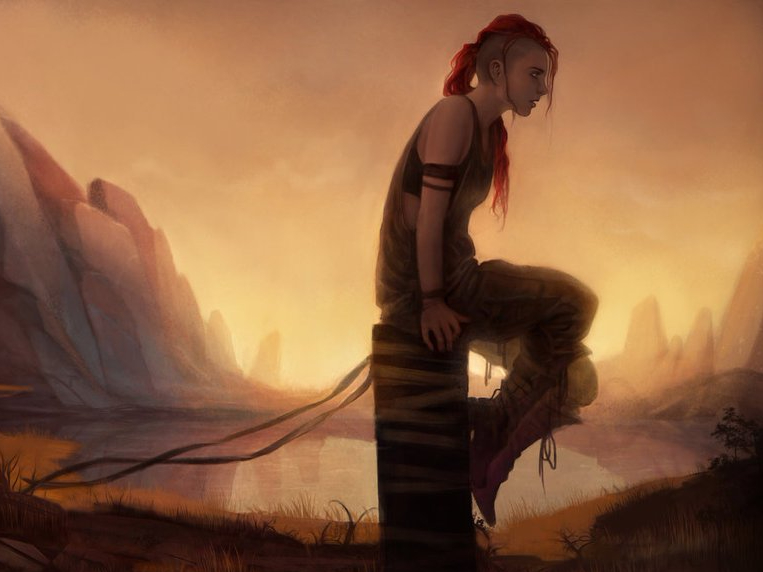 The majority of questions I’ve seen in my Tabletop Gaming history surround a single aspect of the game: The backstory. How much should a player prepare? How much should a DM use? Is there too much? Too little? Can a DM change it?

While the background generation is very important, I think we can tackle the vast majority of your questions and concerns in this one article – as well as give some tips to help you (or your players) make a more meaningful and memorable backstory! So let’s take a look.

So, a player cooks up a cool idea for a character and ties all their stats together to make it work. Now they move on to that second page on the character sheet and see “Character Backstory.”
Some players see it and flip their lid with excitement and ideas – they churn out pages and pages of what their character has seen, done, and experienced. They name all of their family, all of their friends, their clothes have names, they can describe everything about their character to the most infinitesimal detail.
Some players, conversely, see it and everything in their brain screeches to a grinding halt. The entire screenplay to Edward Scissorhands scrolls through their mind and every line they think of ends with “knees weak, palms are sweaty.” So they write the bare minimum (probably 3 sentences) that explain what they are, a general idea of where they came from, and basic ideas that make their character more than a cardboard cut-out.

Neither player is incorrect in their approach to Backstory. No matter which category you fall into, I can, with utter surety, promise you are not alone. Both have their benefits and detriments and both are 100% completely acceptable.
Put down your pitchforks and hear me out.

Once in a while, a Dungeon master will run into a novella chalked full of information. I’ll do my best to create a snippet of such a background for the Forgotten Realms setting for D&D:

“Roana ‘The Red Wind’ was born to an Illuskan father and a Chondathan mother in the city of Daggerford. The two married early and sired six children, of which Roana was the youngest. Each spent their time in the forge with their thick-necked father and the bathhouses with their slender framed mother – renowned for her beauty and grace.

It was in the 13th year of her life that Roana was chased from home by a nobleman by the name of Kallumn Bright – a man whom Roana believed murdered Grismon, her father, in order to force her mother, Chala, to marry him. Her siblings, cowards all, decided it best to keep their heads down. When Roana took up a dagger and tried to exact her revenge on the nobleman, she was beaten to within an inch of her life by his guards. Only the frantic pleading of her mother stayed the executioner’s axe. Now, she is an exile even from her own family, but revenge is never far from her thoughts.

In her first year on the road, Roana earned the nickname ‘The Red Wind’ for her brilliantly red hair and swift feet. When she began- (continue for 3 pages).”

There are loads of useful information right in this opening salvo: we know who she was/is and where she came from, and the moment her life changed from “average” to extraordinary. She’s clearly faced challenges and more than likely will have a troubled soul and difficulty in the world at large due to the trauma of what happened at a relatively young age.

Game Masters generally have two reactions with this kind of detailed background:

I think you can spot which one I’d promote more, but sometimes it is best to kinda leave these backgrounds tucked away from your game. Sometimes the player makes leaps or proclamations that do not fit with everyone else’s backgrounds or the story. If your story has the Sword Coast (where Daggerford is) drowned by the sea 50 years prior, then boy does it not fit with this character.

Fret not, however, because you have a third option! A third much better option that I highly suggest each and every one of you do forever regardless

This does several things. It promotes idea inclusion into your game, it shows you have an investment in your players’ characters, it helps develop and shore-up the PCs background for your exact game, and it more often than not inspires aspects of the story the Game Master might not have considered previously.

(Six months at the table pass, and the DM says) Roana, there is a knock at your door. A courier is delivering a letter to you, and it’s addressed to you – by your full name, the name you left behind in Daggerford.
When you open it, it reads:
Sister, your name has found its way back to us. We are so relieved you are alive and well. Your exploits and adventures seem too heroic to even be true, and we pray your actions against the Duchess of Spires makes true change.
My heart bids me be forthright, sister. Niceties belong in a better, kinder world than our own. Lord Kallumn Bright has made quite the name for himself here and has risen to power within the Council of Guilds. What should be inspiring news has turned rotten, as mother was attacked on the streets some nights ago by brigands. Only by Tymora’s blessings did she survive – a priest happened upon her, bleeding from the belly, in the night.
I fear that Lord Bright seeks to murder her, as we believed he murdered our father. His avarice knows no bounds, and we believe he seeks the duchy here through marriage. His merchant friends are little more than criminals and his businesses bleed his competition dry. I know there is little love of us in your heart, but we beg of you – as your blood family – please, return home. Please, save our mother and cast this despot out.
With respect and admiration,
Kyrina

Tell me, dear reader, what player would not FLIP THE HELL OUT to have their backstory thrust into the game in such a way. It’s imminent, it’s direct, it ties in to not only their background but the marrow of their character, and would not be possible at all without the lengthy and detailed history they gifted to you!

More often than not, Game Masters end up with the thin, brittle, unworked skeleton of a background. Two sentences should feel like a gift.

My character’s name is Roana. Her dad was killed when she was young and she joined up with some mercenaries or cultists or something. She’s tall and skinny with red hair.

How can this possibly be as useful as the other? Let me tell you – there’s room to grow. This player has opened three doors to you, as a GM, to look through.

All three can be mixed back into the story to stitch this character into the world. You can even have the three be centerpieces to a leg of your characters’ journey – to the point that it can fit in anywhere!
In Phlan? Maybe the Dragon Cultists recognize her. In Waterdeep? What if a mercenary band shows up asking for the party’s help – old friends of Roana’s. Maybe the cultists she traveled with didn’t tell her anything, but were actually members of the Kraken Society – and one of them short-cuts the adventures in Storm King’s Thunder. What if her father was secretly an important figure – or if his death somehow changed the world: Roana is now the heir to a duchy of her own due to a plague that cut the succession of the throne short!

Having a background be this malleable is extremely helpful for experienced DMs and new players – which is the perfect road to impressive roleplaying platforms. Maybe Roana doesn’t end up as the rogue that the player envisioned, but instead forms a pact with a devil to gain power and influence – accepting the cult’s teachings and using it to destroy them from the inside out.

If you have every moment of her story planned out from the time she opens her eyes to the time she’s buried – it leaves no room for the character to surprise you or change in a dynamic way. Both of which are, arguably, the best aspects of character development in any medium.

For all you players and GMs out there, when I’m creating a background for a character I like to touch on four specific aspects. Four sentences is the bare minimum I look for when making a background, and four paragraphs is the limit I put on myself. For those of you who absolutely have to write a novella – try out a four page limit.

So, lets write out a quick four sentence backstory using these steps:

(1) Harvil grew up with five older bothers on the streets of London. (2) He was barely in his teens when he stumbled onto the handiwork of ‘The Ripper’ – a brutal murderer that cut up dozens of people just like his mother. (3) When the street gangs in foggy London started warring with each other, Harvil and his brothers got caught up in the whole mess – and not all of them ended up on the same sides.
(4) It didn’t take long for Harvil to decide he needed to take matters into his own hands and start up his own gang of cutpurses and snoopers – to try and clean up this giant fucking mess the adults and idiots made of his city.

From here, all of you quaking to read/write more just stretch each sentence into a paragraph (into a page, into a chapter, into a novel, into a book, into a series). Without ever changing the core sentence of the backstory, you’ll not lose your way among the thousand words you write for your character!

There’s really no improper way to do it. There are dozens of books about character backstory/backgrounds out there – and most of them have at least one great contribution to the cause. The fundamentals that I, personally, want to instill in you is – give the person running the game something to work with.

It doesn’t matter if it’s one really good sentence or a dozen pages – so long as your game master comes away inspired about your character and wanting to involve them in the story (or give them cool moments to shine), then you’re absolutely doing it right!

Don’t be afraid to ask your Game Master questions for your background and ways to make their life easier – give them a direct path to the very soul of your character and you’ll never feel neglected or rejected by them (so long as they’re a capable GM, I suppose).

Oh – and one more thing… give your character room, in their backstory, to change. Ever see a show that goes back to something that happened in season 1 and change it all to fit some narrative in season 5? It’s annoying as hell to “make it work’ – give yourself some wiggle room!