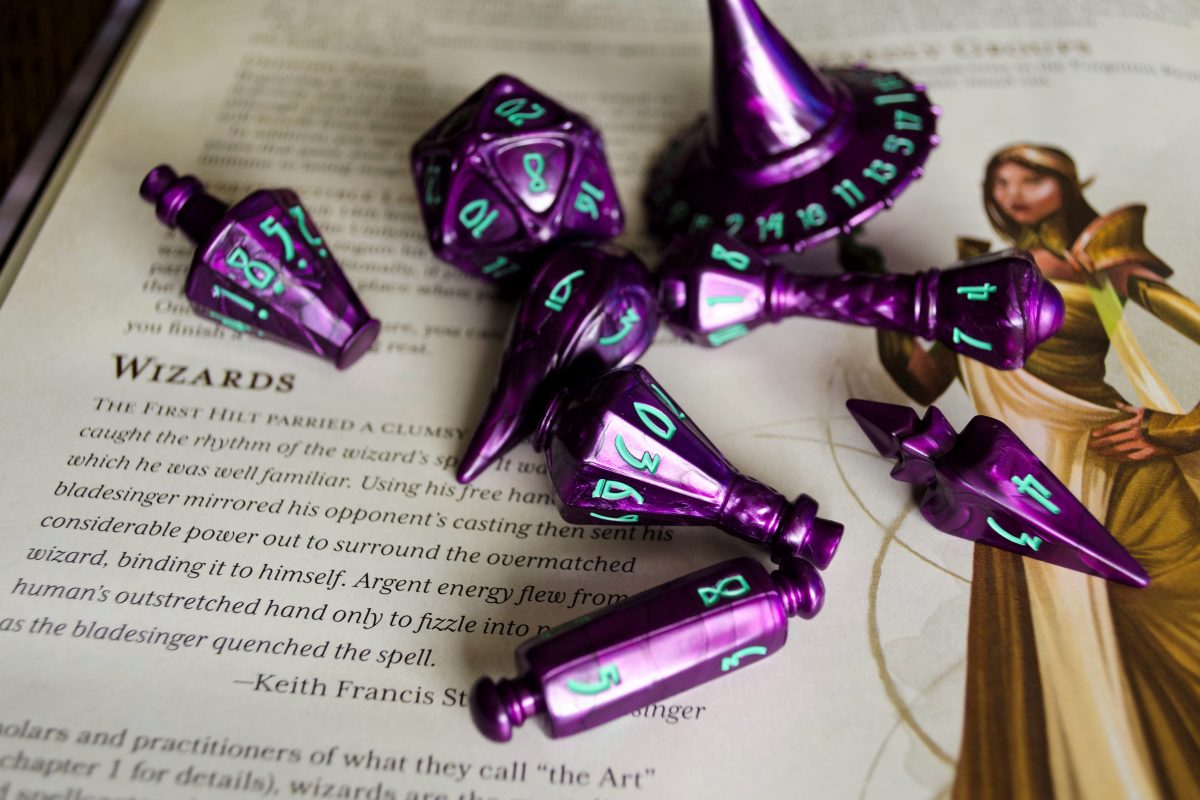 We’ve had novelty dice in the past (glow in the dark, free-floating dice, etc) but … never THIS level of novelty. These took the internet by storm when they were announced many eons ago – I was shared the Warrior Dice link at least a thousand times. Now we step away from the bloodsoaked carnage and into the realm of high magic.

These dice are clearly interesting, but do they hold up to what dice aspire to be? Are Wizard Dice just a fun toy to keep around, or will they make it into your weekly use at the gaming table? Let’s find out.

Well… You’re not paying for storage here. These guys come in a very minimal packaging – your standard plastic bag with a cardboard closure.

These kinds of things are meant to keep costs down. You cannot just look at it from the angle of usefulness/showmanship – you have to consider the value of the purchase. And for a 7pc set of dice that runs $20 USD (2018), any way they can cut costs should be taken as a boon.

Lapis Lazuli is a granite-like blue and grey stone. They’ve made a very decent reproduction for a plastic set of dice: a very marble-like blend of dark blue, moderate blue, and a pale greyish-blue. Overall, these are quite striking and lovely.

Wizardstone is a deep and vibrant purple blended with a more pale and less viscus purple – giving a two-tone quality that resembles stone. The finish on wizardstone makes it very reflective against the darker colors underneath. Even still, these are a great color combination – the “mystic runes” being a pale green makes them stand out incredibly against the dark purple.

Here we enter the real meat-and-potatoes of the review: the theme! Each die is altered from their traditional cousins.

The d4 is extremely light and angular. It rolls much more easily than a traditional d4, and I honestly want to replace all of my d4s with these. As seen above, the point of the bolt tilts downward, making the numbers harder to read from almost any angle but with the point facing you. When the point is facing you? The numbers are upside down – which sucks.

Unlike the bolt, the fireball numbers are positioned to face AWAY from you, while the small point of the die points toward you, meaning these dice are often easier to read from most angles. The swirl designed into the die actually makes it roll in a crescent shape. Rolling it off a table would take considerable effort. Effort which I have done, entirely for you.

D8s are very common dice for non-casters (particularly paladins), meaning they have a high standard to live up to. Trying to imagine rolling 10 of these at once for a Chain Lighting, however, would be absurd. They’re slender and thin and thematically I think they’re well designed. Alternating the numbers was a wise move, as it helps cut down on misreading these dice. Be warned – they require a flat surface.

Flat bottomed, these bottles are possibly my favorite dice in the set. They’re as large as d10s, though differently proportioned, the numbers point toward the base, they are alternating in size (fat topped, fat bottomed), and they roll pretty well! Having flat edges wrapping around the bottles makes them roll in a curlicue pattern that’s fun to fidget with.

And I never relaized how much I wanted to stand my dice up on their one without stacking them.

I am not a huge fan of this die. After some practice, it’s a lot easier to read/make sure I’m getting the proper number, but sometimes they can settle between numbers, especially on a felt table. I’ve had to push the die flat on our local table just to make sure I was reading the right number.
The best part – they’re d12s, and very few spells use that particular die, so if you’re not happy with these, you’ll only be mildly discomforted very occasionally.

This thing is MASSIVE. It can actually be used on a battle map to represent a flaming sphere. It’s by far the most stable sitting die of the bunch. The numbers look great, and I think it fits well with the theme for the dice.

When on a flat surface, you can kick the table and this thing doesn’t even roll onto a new side – just kinda wiggles there. It’s hefty but not heavy, large, but not too bulky, and the numbers show great. This d20 is a home-run in all respects but one… (see below)

These dice weigh in 50% heavier than a traditional plastic dice set. The vast majority of that weight comes from the d20 and d10s.

As far as cut goes, the Wizard Dice are, on the whole, larger from tip to tip, but most of them are much thinner than their counterparts.

The big talking point still ends up being the d20, which is CONSIDERABLY larger than a standard d20.

The real problem isn’t using the die or how the die looks (it’s still quite pleasing to the eye), but storing the thing with the rest of the set in non-bag storage options:

Yeah… it big. So when considering your storage for these things, I vote for a bag.

Hat’s Off to Ya

I also snagged one of these intense things! The Wizard Hat (in Wizardstone color) is an add-on that Polyhero has released. The fun thing about it – the wizard at my weekly table spins his d20s non-stop… now he can spin his way to victory as long as he likes!

Ostentatious, pretty, quirky, easy to use but difficult to understand? It’s the perfect representation of a good wizard!

The “Wizard Hat” d20 is a top-style die. There are some good qualities to such a thing and some big drawbacks to it as well.

Pro: The numbers are huge and easy to read when it does face you.

Pro: You can scream “YOU SPIN ME RIGHT ROUND BABY RIGHT-” the whole time the thing spins on the table. Looks so bad ass.

but if you can manage to find a good way to store them – these things are entirely too interesting to pass up. Lapis Lazuli has a bold and vibrant contrast, while the deep and subtle tones of Wizardstone make for a wonderful addition to anyone who loves the royal look. Check these things out. With over 10 colors to choose from, chances are you’ll find some to strike your fancy.