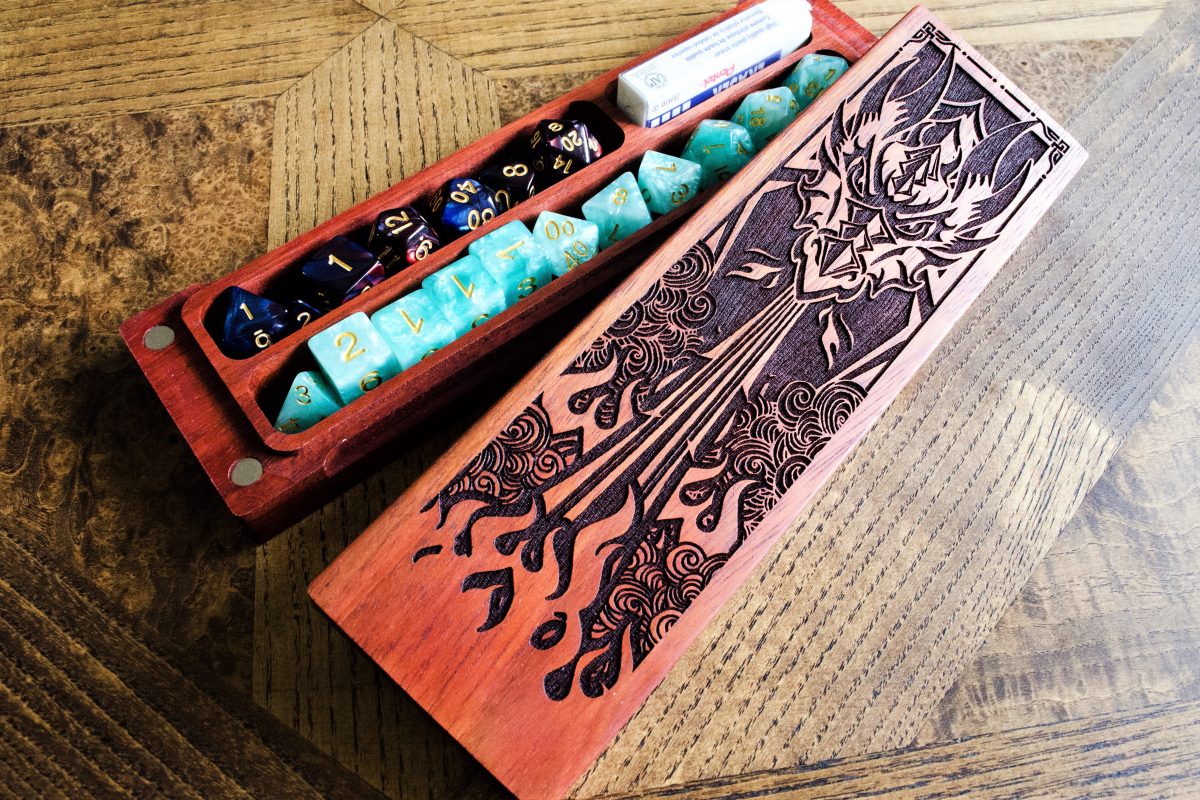 I’ve decided to tackle a double review this week. After 11 days of CONSTANT camera issues and photography hang-ups, computer problems and project failures, at least I’ve finally gotten around to writing about two of my favorite products: A new Dragon Themed Pencil Dice Box from Eldritch Arts, and the highly sought after Iconic Blue limited run dice from Kraken Dice!

Why a fire-breathing dragon and a sea-foam kraken together? Let me show you –

To set the record straight, before we move on, allow me to tell you the story behind the Limited Edition “Iconic” dice from Kraken Dice. 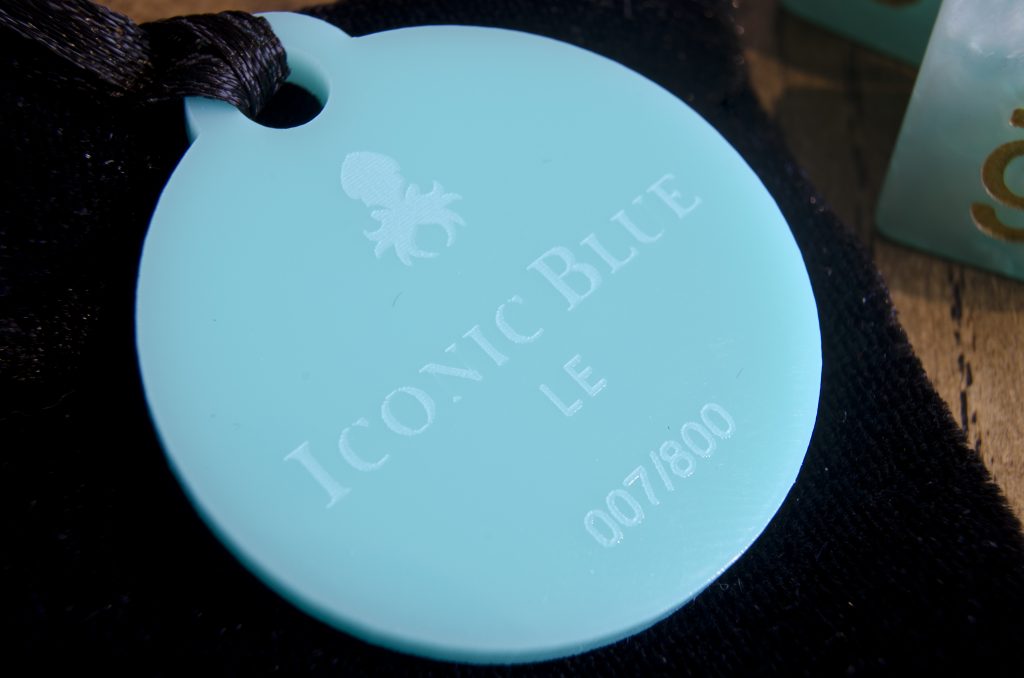 It’s been a point of contention among many people in the community: “Why on earth would they only make 800?!” “I didn’t even have a chance to get some!” “This is hecking dumb, stupid heck’n heckers!” to which I say woah, watch your language! But also want educate: the limited edition dice were born out of necessity.

You see, Kraken Dice is a fairly new dice company in the business. They’ve started leaving behind dice re-distribution (where companies buy up the same 20 dice sets as everyone else on earth and resell them with their own branding) and have started breaking into the dice manufacturing business (where they create color blends and palettes, order those dice to be manufactured and molds to be made for them, have them manufactured, usually in China, and shipped to them.) The difference in the two is quite a lot of start-up capital. Instead of purchasing dice that are already made and sitting in warehouses, the company has to pay for the dice then wait months for those dice to be shipped in, sort through them all to find the sets high enough quality to sell, then ship them out to customers.

In the case of the Iconic Cotton Candy, Iconic Blue, and Ethereal Shaman – the owners of Kraken Dice paid out-of-pocket to have those three blends of dice manufactured with absolutely no clue how they would sell. Cotton Candy took months to sell out, while Iconic Blue took less than 5 minutes, and Ethereal Shaman took less than 3. Had they known of the popularity of the second two sets, I’m sure they’d have bought thousands more to sell – but, alas.

So now the company has turned to Kickstarter to handle their next 6 sets – so that whoever wants them can have access to them, and they can get a feel for just how many dice to buy in the future.

Now that you know, maybe you can understand how marketing the sets as Limited Edition made a whole lot of sense, and we can judge the dice not on their scarcity but on their quality.

Right off the bat, the blend of reflective and contrasting colors will grab every bit of your attention. 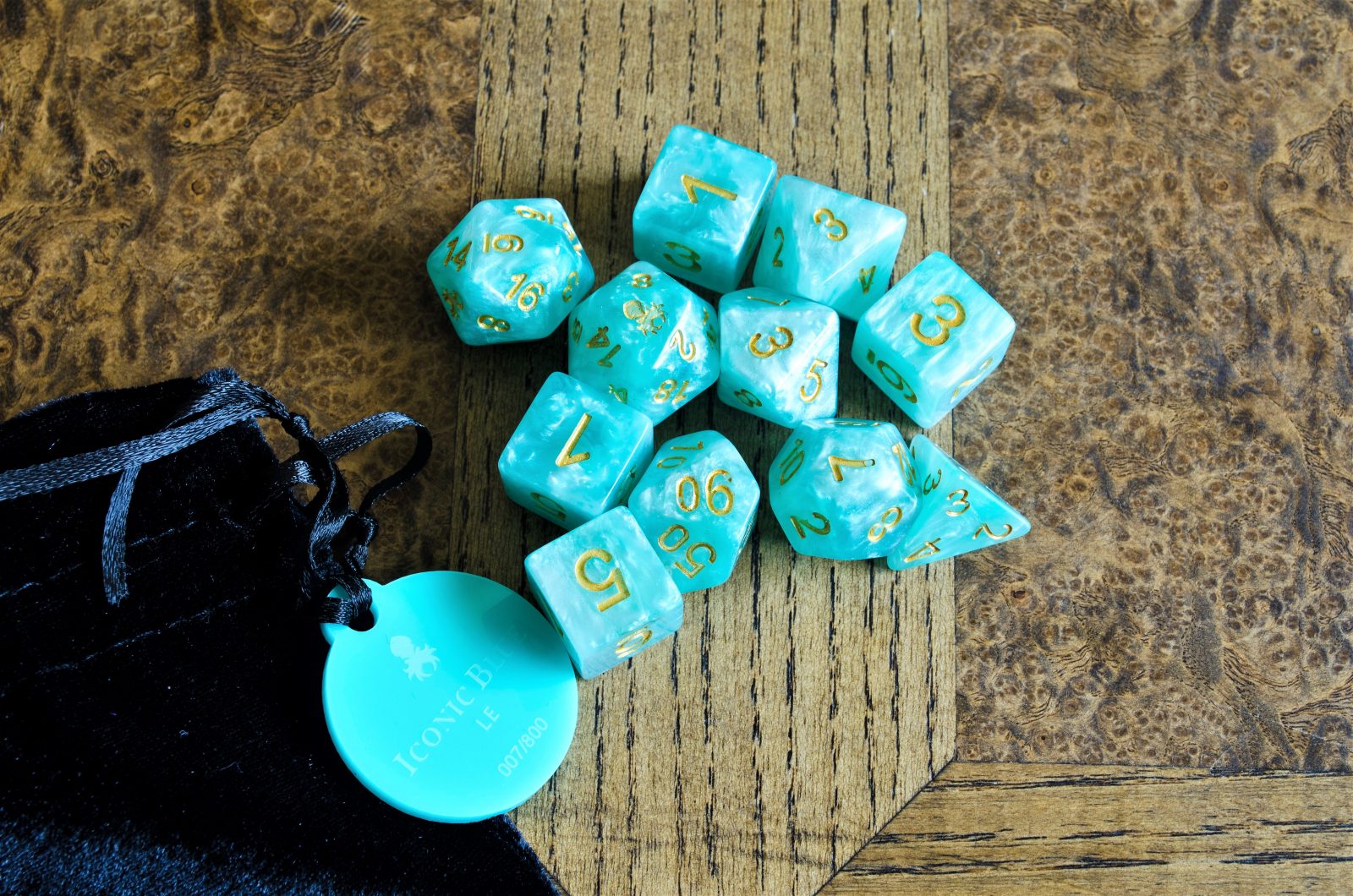 The bright blue and green colors blend with a glacial near-transparent green and soft while glitter marbling to make… an insanely attractive set of dice. The hardest problem for would-be buyers was the fact that every time someone posted photos of these dice, they looked slightly different, and that’s extremely true.

Due to the various transparencies and the contrast of colors, as well as the glitter effect, these dice can very much change in hue and even sharpness depending on the light.

Into the Light, I Command Thee

Let’s take a moment to compare and contrast exactly what I mean: First up, this photo from average, workday, 3pm light. 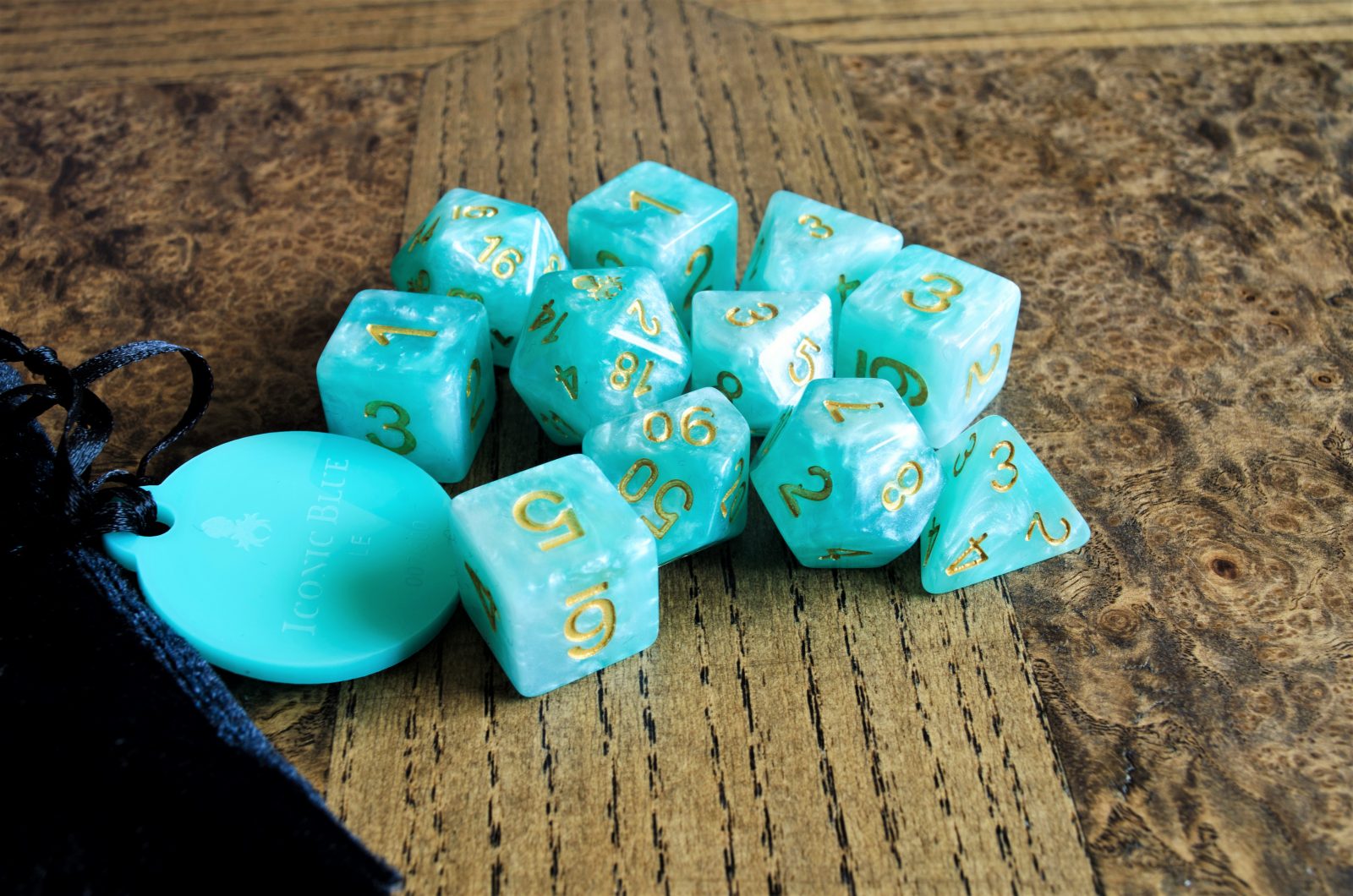 We can see, the dice have a mostly blue/white color. The vibrancy is a little muted, but the reflection of the die is incredible in this white afternoon light, they look like a glitter die through and through. Fast forward 17 hours (8am the next day) with the EXACT same weather outside… 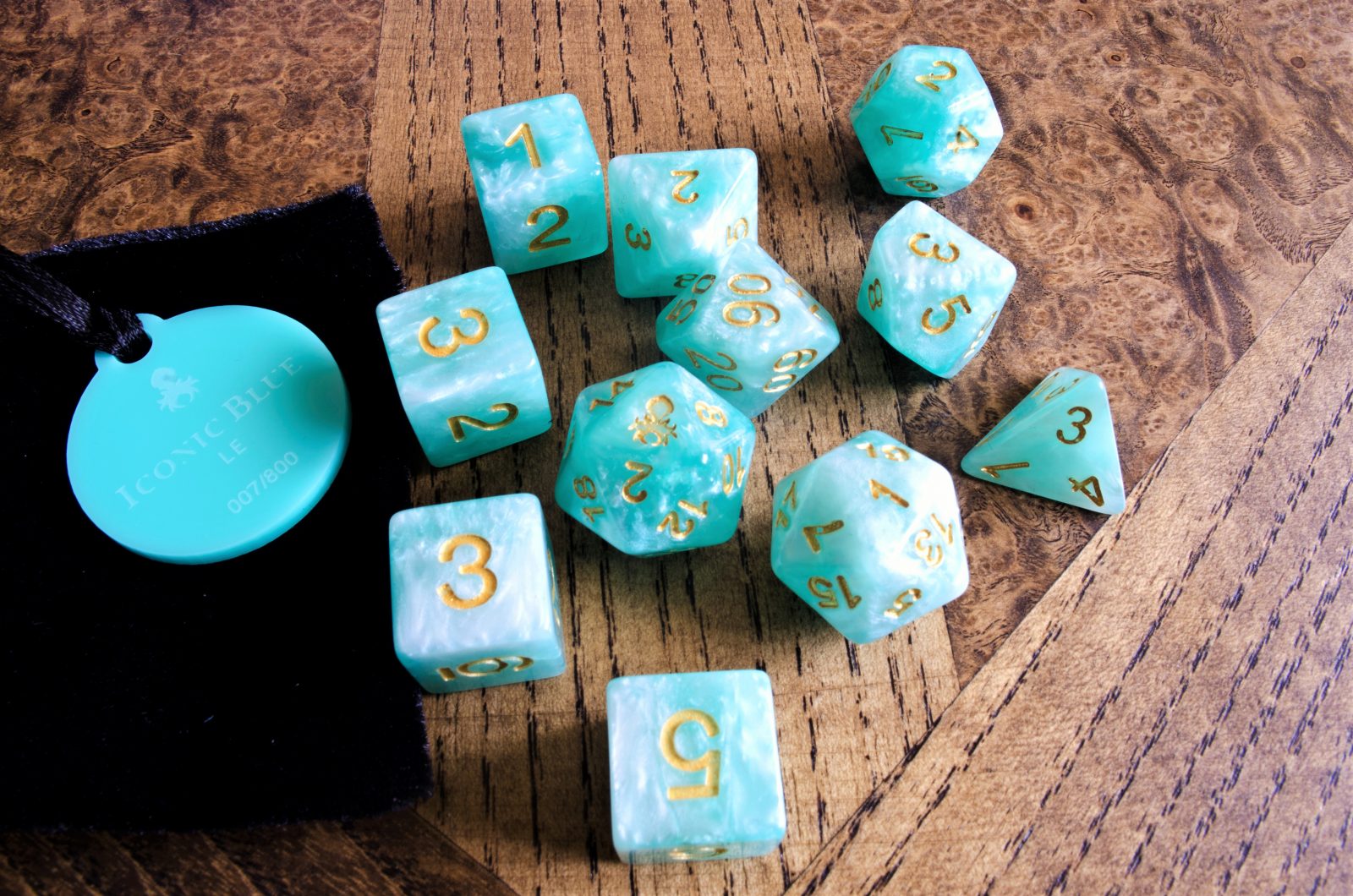 You can see the dice are much more blue in this warmer, earlier, light. The white marbling shoots through and the translucent rivulets in the dice are very pronounced against the warmer surrounding colors. The gold lettering, while lovely in both photos, remains mostly unchanged – just a slight hue difference due to the warmth of the outdoor light.

If you take the light argument to the extreme, you get the following head-to-head experience.

First: Light from the Back 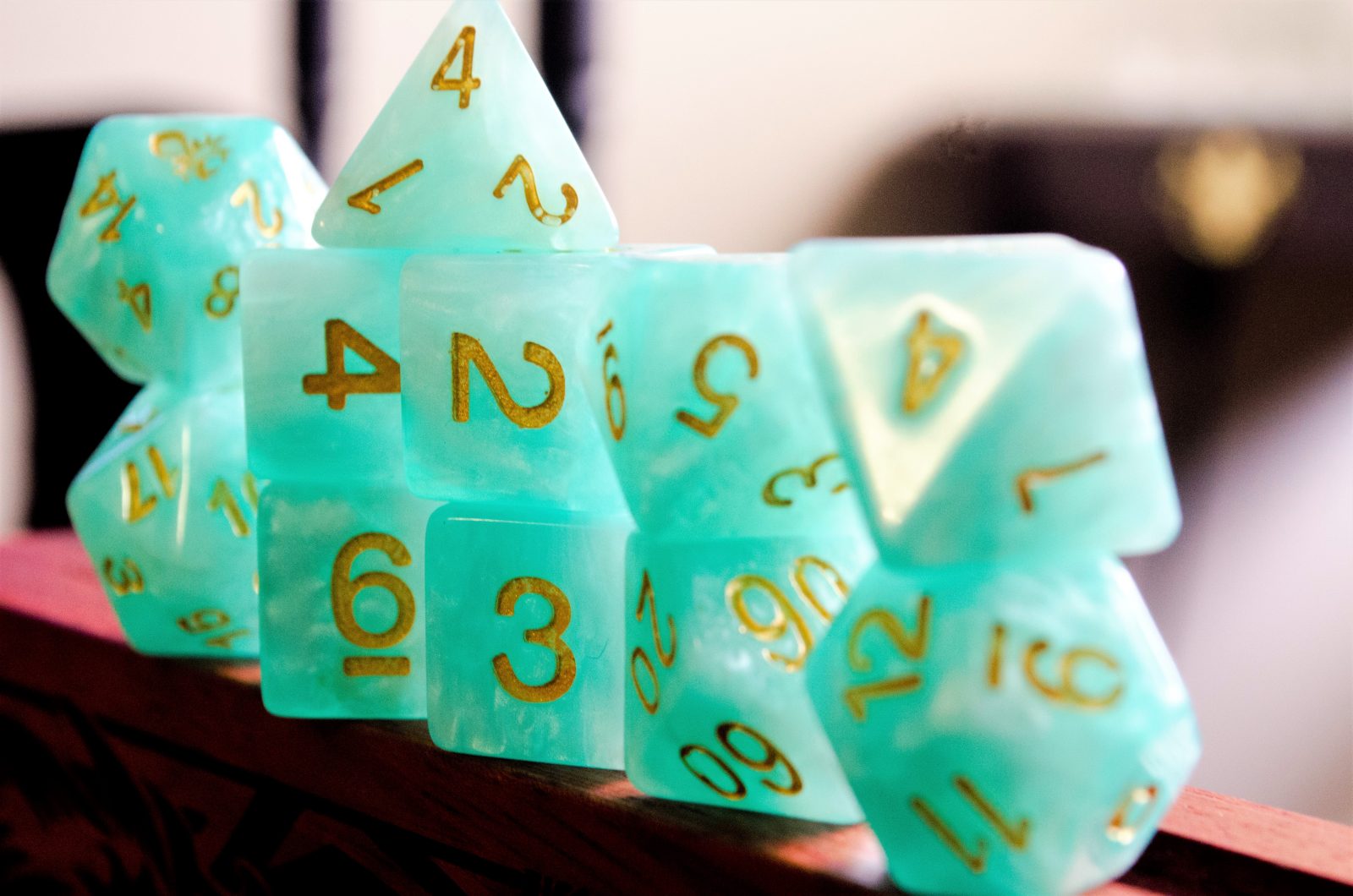 Second: Same light, from the FRONT.

Take note of the level of clarity and transparency present in the dice from both positions. The reflective qualities are muted as the light comes through the dice, but is highlighted extremely well when the dice is facing the light source.

All of these factors combined show why so many people were confused when these dice were spreading all over the internet – they have a lot of qualities acting together to make a very dynamic and shifting color contrast.

To really show off the white coloring and the reflection of the glitter present in the die, let’s go macro as hell and really take a look. Foreword – Brian and Diana own a rabbit… so if you see hair on a few of these close-ups, that’s why. I washed my dice, lovingly, while playing soothing Irish Folk songs and burning a Black Hound Tavern candle, before I used them – but in my excitement I took a few shots just as soon as I opened the bag. Forgive us all.

(PS: if you WASH YOUR CRUSTY DISGUSTING DICE COVERED IN ROTTING FOOD AND ENOUGH BACTERIA TO MURDER A THOUSAND ORCS, remember to use a gentle car wash soap, or you’ll run the risk of messing up the inking/lettering on the die. Something like 1/4 tsp in a quarter gallon of water should do just fine.)

I’ll post these incredible close-ups as a gallery to prevent from scrolling through a MILE of photos. Just click on the one you wanna check out and be sure to compare and contrast!

Some lettering is bold and incredible. Note the marble wave-like glittering!

Bun Hair Excluded, you can really see the bold colors.

The reflective and eye-catching inks are a little splotchy and thin, but contrast well in almost all lights.

The transparent greens and solid blues make for a Glacier-like color combination!

Close up, the pattern made by the glitter is amazing, but the inking for the numbers is no so great.

Distance and light make a huge difference on the clarity of the dice and the overall water-like appearance, no?

Bun Hair Excluded, these dice have nearly no internal flaws, giving them that not-quite-opaque look. The lettering tho… yikes.

But Where does the Dragon come in?

Use the coupon code: DropTheDie15 for 15% off of your Eldritch Arts order! Anything you want IN THE STORE!

Many of you remember how completely blown away I was by Eldritch Arts US – their Avalon Pencil Box was incredible, and their Gen 1 dice boxes were cheap and high quality to boot! Now they have another notch in their belt… They fit these 11 piece dice sets PERFECTLY. 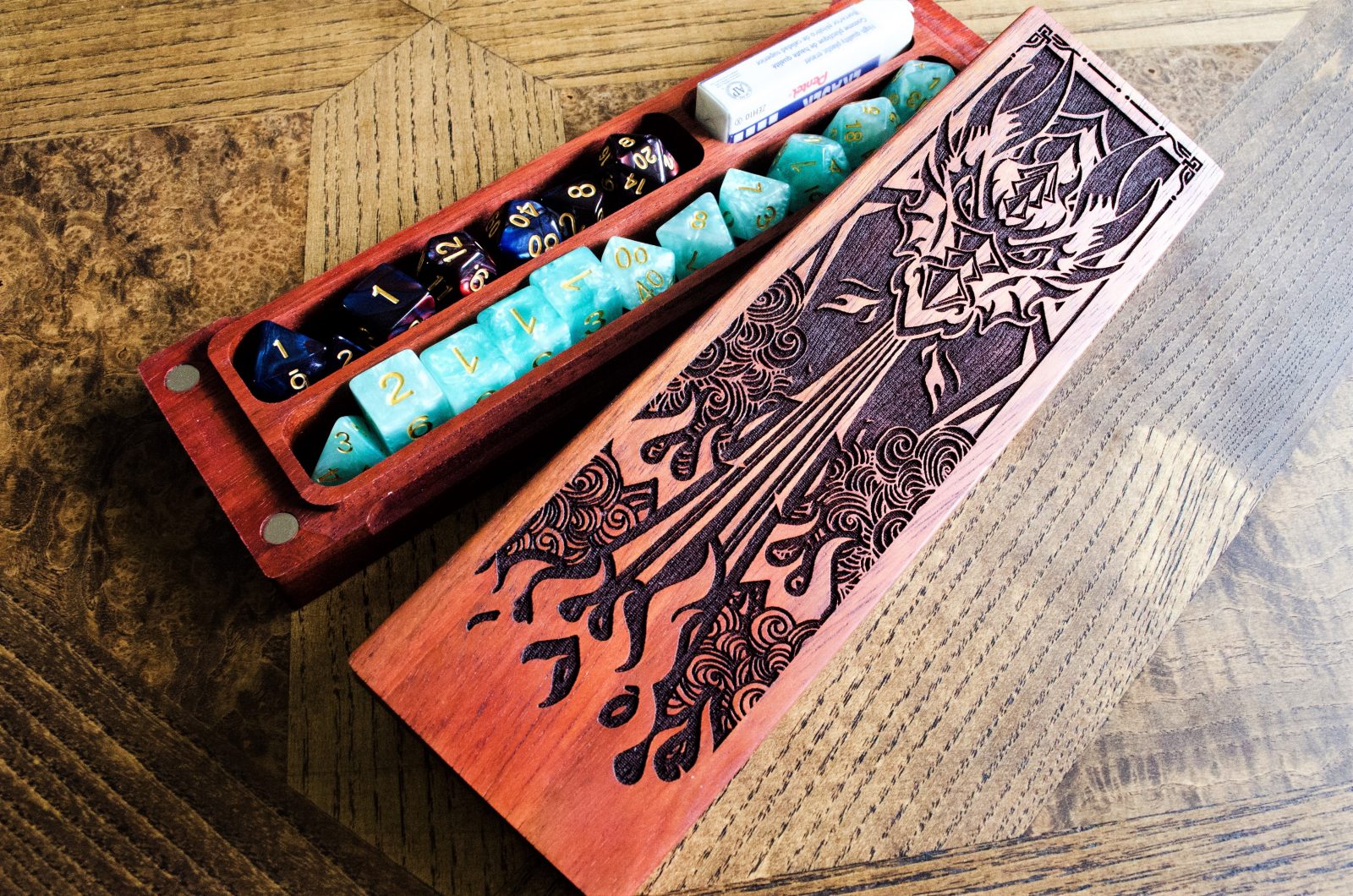 The boxes themselves deserve their own review – and you can find just that HERE, where I break down every positive and negative aspect of the dice box. But allow me to melt the eyes right out of your head with how gorgeous these things are together!

The dice box’s ability to house a full 11 pc set, comfortably, an entire 7 pc set, and 4d6s/artist eraser/tokens/coins/or (baseless) miniatures is a HUGE SELLING POINT in the evolving world of Tabletop Dice. If you’re anything like me, you have a bag with ten pens in it, six pencils – two of which have led, one of which has the “good” eraser – so storing a pencil may not be as handy as finding a home for these massive 11pc collectors sets. 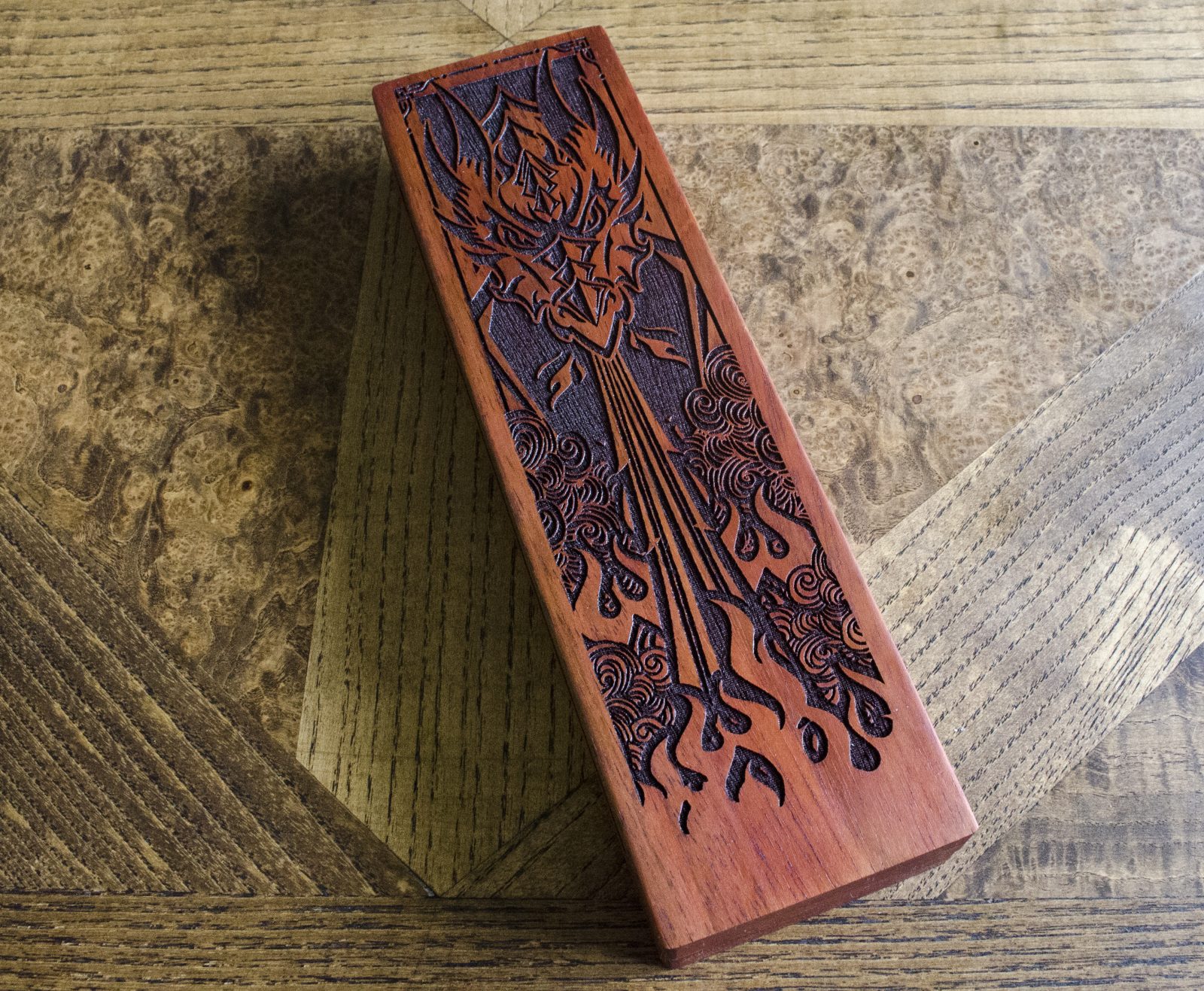 The laser carving is deep and dark, very VERY well done on both boxes I’ve received – which makes me feel much more confident in suggesting these boxes to practically anyone.

I think the photos are worth about 60,000 words – but let me reiterate. From the treatment of the wood, to the choice in magnets, the notched sides for easy opening, the gorgeous polish of the finish, and the very well done liners – Gene over at Eldritch Arts US is doing incredible work. I highly suggest you go check these things out.

Use the coupon code: DropTheDie15 for 15% off of your Eldritch Arts order! Anything you want IN THE STORE! 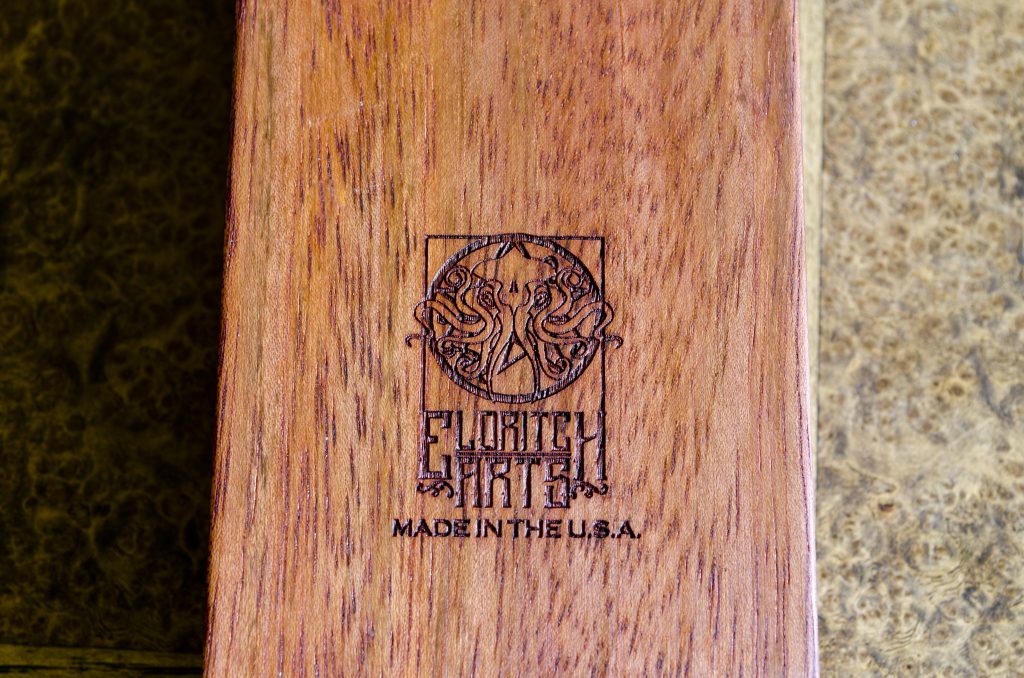 This has not been a post meant to make you upset that you “missed” snagging the Iconic Blue dice. What it’s meant for is to show you the remarkable improvement in quality from both Kraken Dice and Eldritch Arts. Kraken dice is taking leaps and bounds beyond its competition in terms of offering new and exciting dice options to choose from, and Eldritch Arts has taken user feedback to heart and stepped up their design and execution in ways I never expected from such a small company.

Keep an eye out for Kraken Dice’s new Kickstarter – where you can GUARANTEE yourself some of these Iconic “Mythic” style dice. No need to frantically try to add them to your cart and miss them anyway.

And be on the lookout for my Eldritch Arts dice-box GENERATION II review coming soon… spoiler, they’ve improved everything about them. 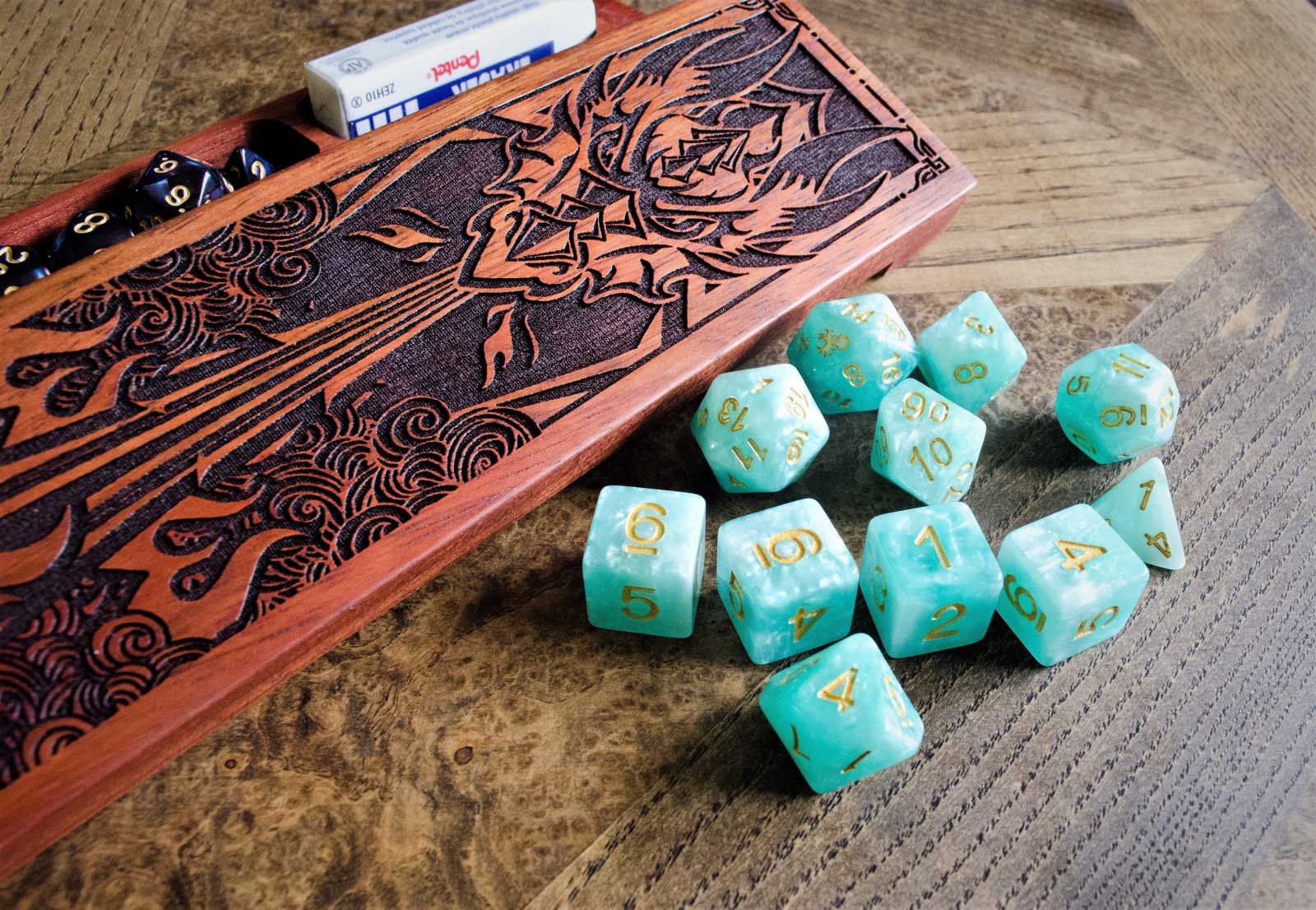