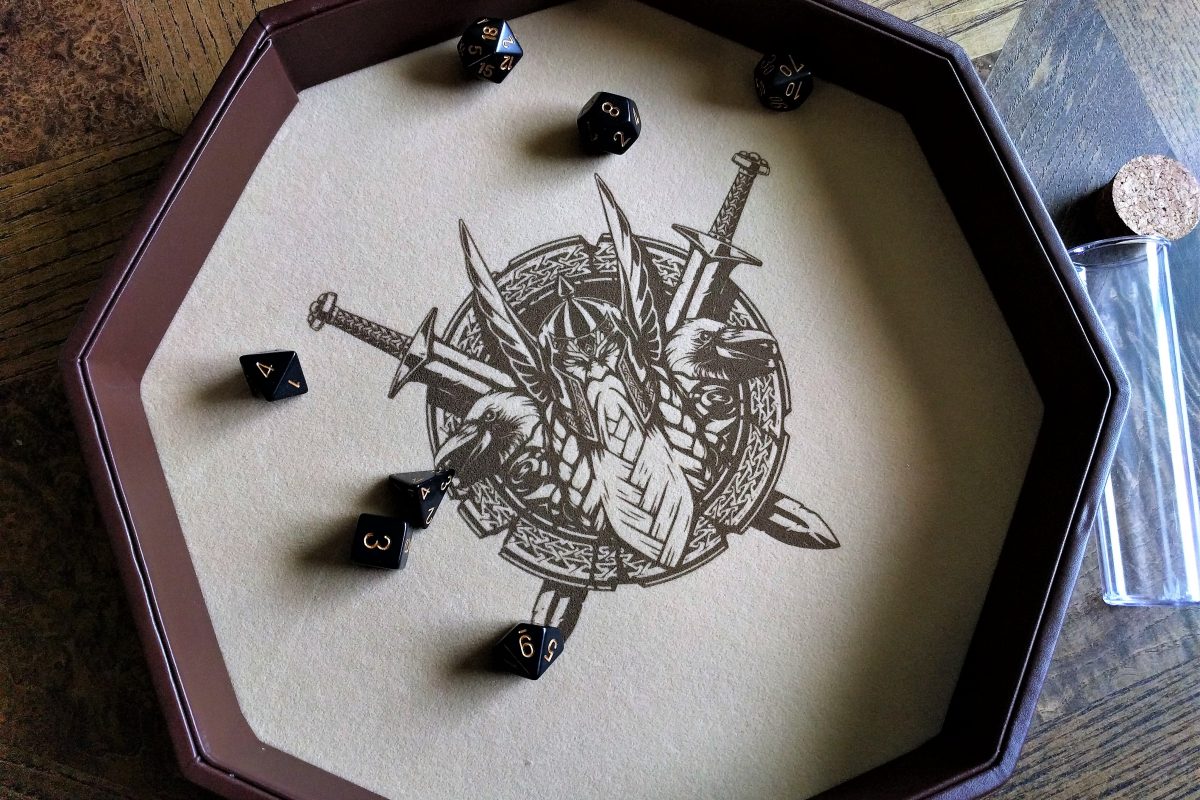 Know him as Wōden, Wōdan, Wuotan, Wōtan, or Odin many are inspired by the one-eyed god of Old Norse mythos. So much so that he’s made appearances in every form of popular media throughout time. Now, you can be inspired by the god of battle when you need it most – we’re taking at look at the Odin Battlefield Dice Tray!

So, here’s a thing – I don’t like Darksilver Forge’s packaging for this dice tray. The cardboard box is very flimsy, the colors (gray, green, and black) do not match the tray at all (brown, tan). The lettering on the front is a little gimmicky, and the banner “premium quality” is pointless – since every item manufactured in the past 50 years sports that boast, I think. 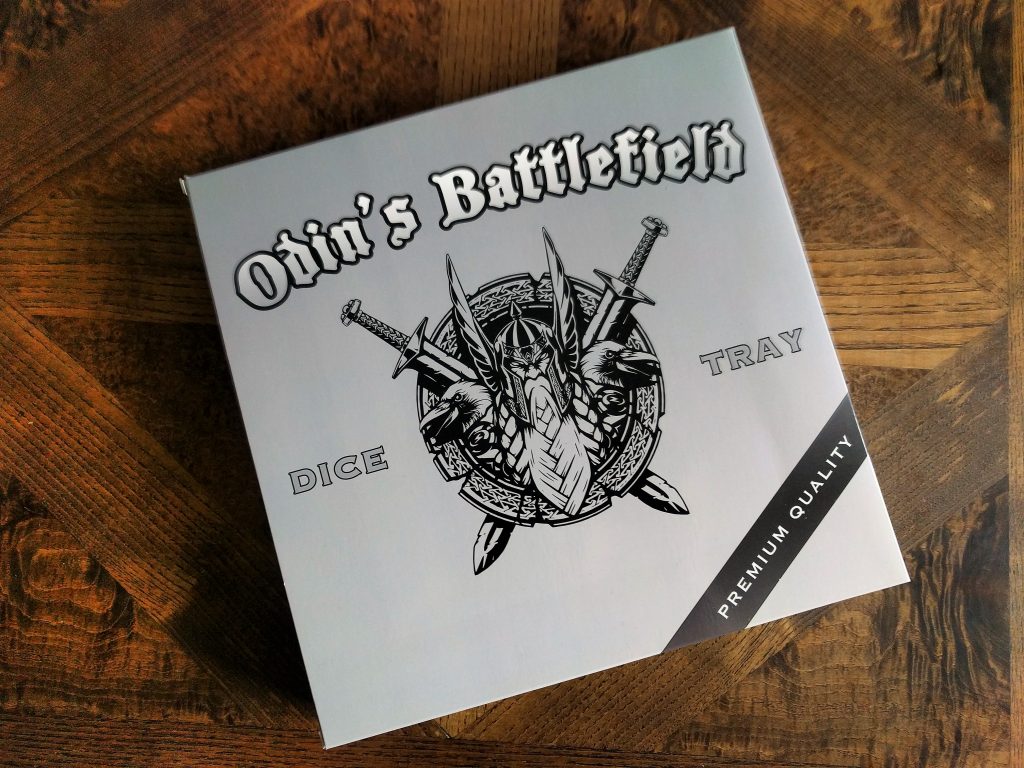 The only redeeming quality to the face of the box is that completely amazing art on the cover. Crossed swords, a helmed viking-esque warrior with two working eyes and five miles a beard, a Celtic inspired circle, and two ravens. Very fitting and themeatic!

The back fairs no better, really, than the front. 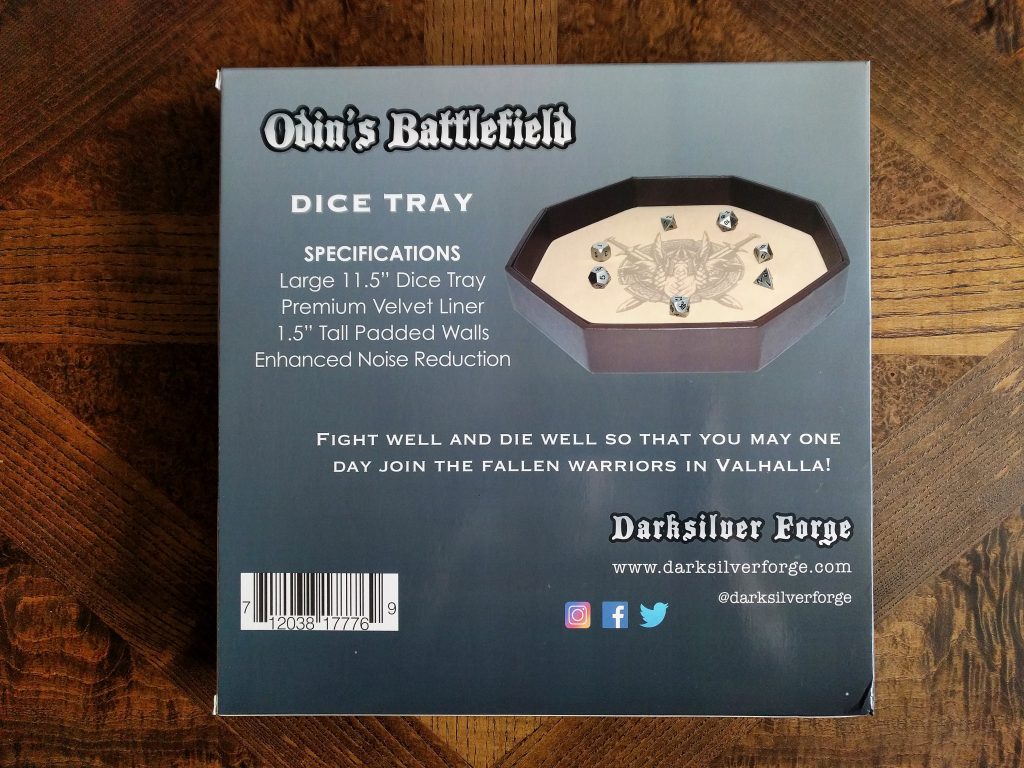 I think the presentation of the tray is wonky – taking 1/4 of the entire packaging. The font for Specifications is a little too thin to appease the eye, but is forgiveable. The “Odin” font and “Darksilver Forge” font are far, far bolder than the rest of the case, which clashes with the 1950s noir typewriter font used for the webstie and @. The bar-code is not left-aligned with the font above it, the three logos for Instagram, Facebook, and Twitter are oddly placed and not aligned with anything.

And worst of all… I KNOW you see those poorly photographed dice in there. They’re not photoshopped (that I can tell) but sure look like it. The lighting for that photograph is SO HARSH that the shadows are obliterated, making it look like a cut-and-paste job.

Luckily, the packaging does not matter all that much. What you’re here for is the tray itself. Now, we’ve seen this exact configuration from Easy Roller Dice Co a long, long time ago – including the size, octagonal shape, depth, and selling point (noise reduction). In that review, I commend the tray on doing exactly that, and this one does as well…

So what’s the difference? 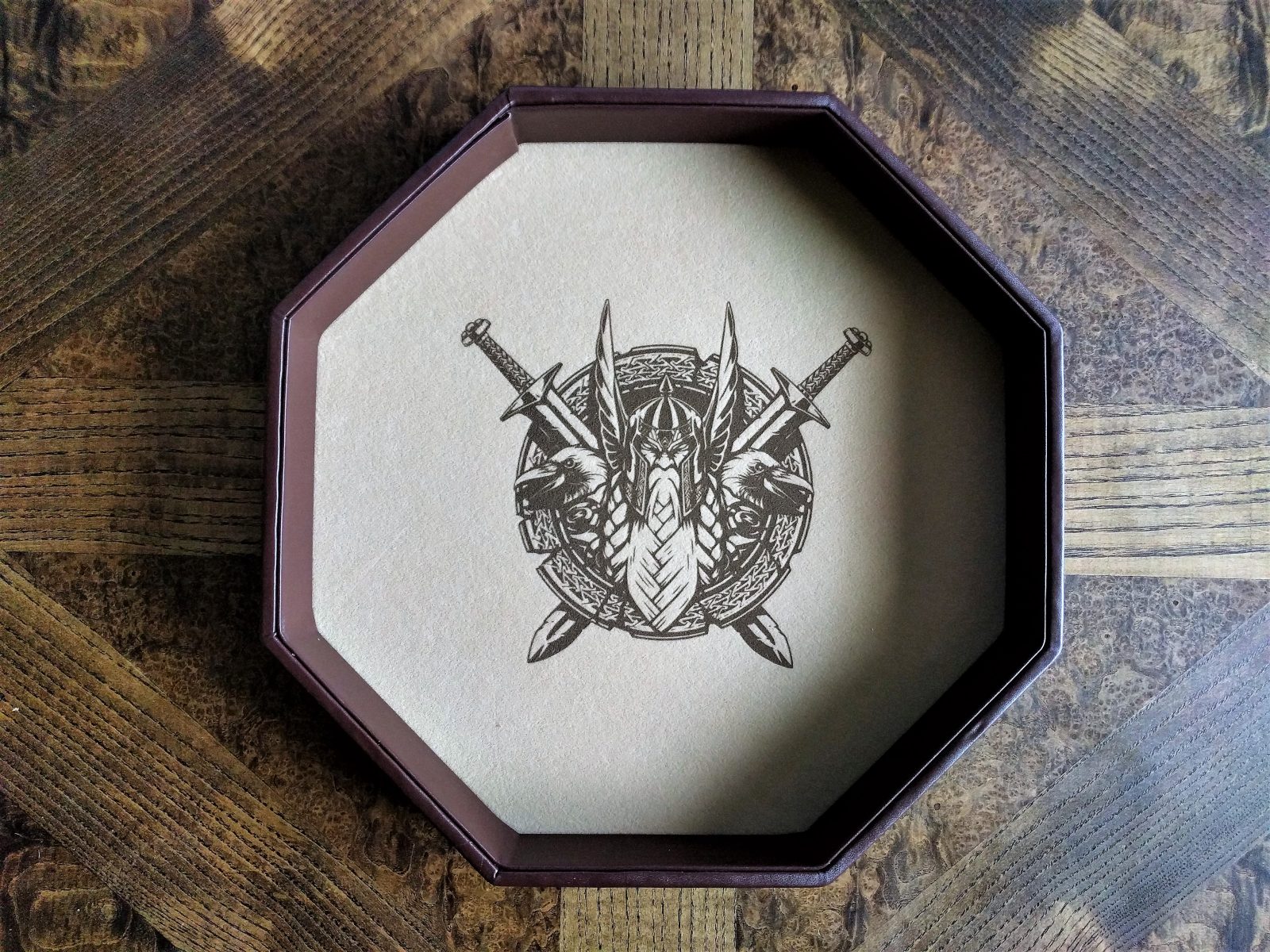 Theme. Theme, my friends, is the only difference. The dark brown faux-leather of walls and back contrast well with the tan velvet liner and the dark grey/black image of Nealy-Odin in the middle!

Speaking of the faux-leather – I’m pretty happy to say they’ve matched the quality we’ve seen from Easy Roller in the past, as far as the leather itself is concerned.

The huge 11.5″ tray is pretty banana pancakes when it comes to practical use. Very often these trays are thought to be too large by players and DMs alike. I tend to agree unless you’re sharing with a friend or two – in which case, the ample space is useful. 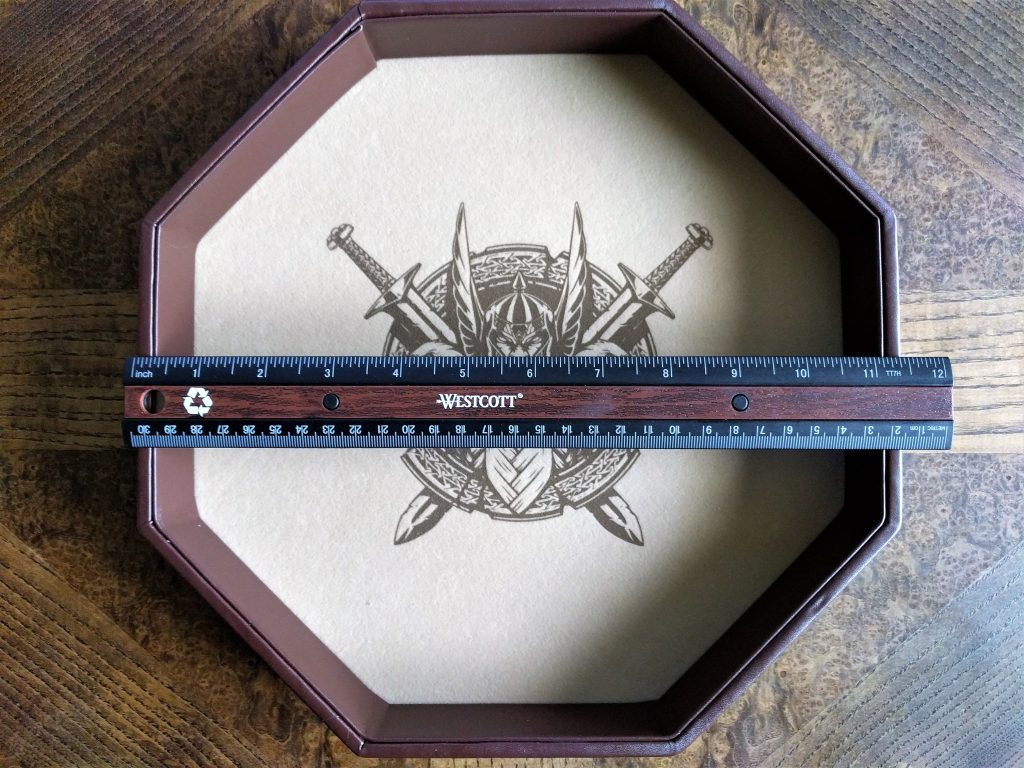 Anyone who plays at a small square or round table can put this dice tray right in the middle of the table and up to four can comfortably utilize it without even having their dice touch. 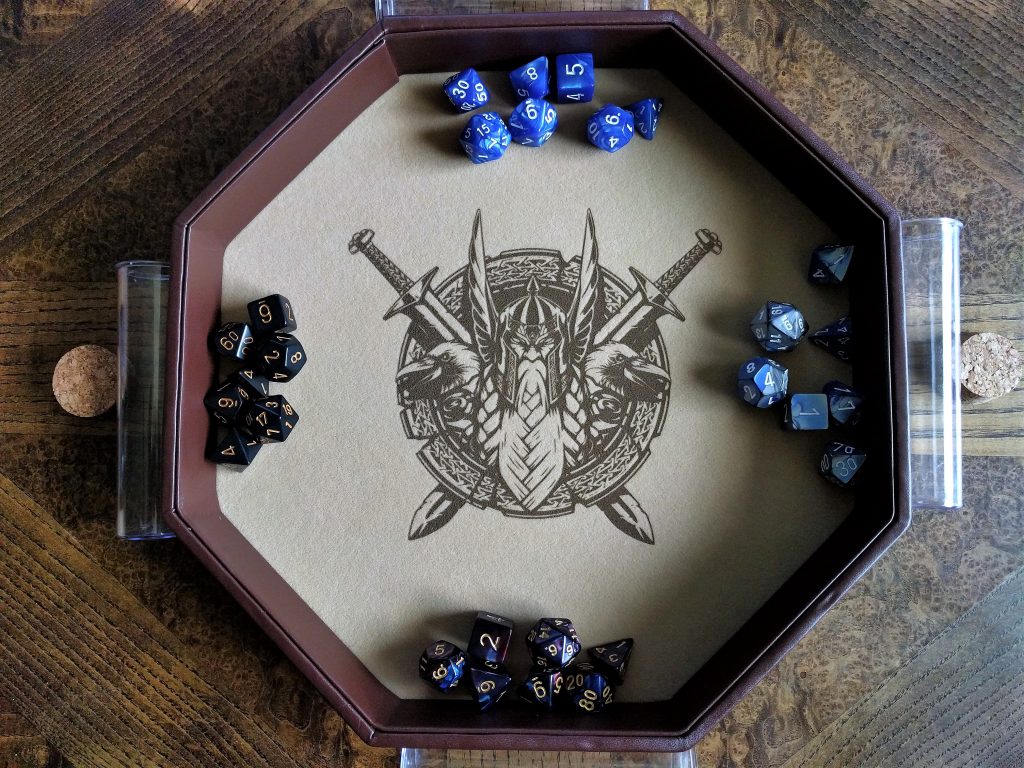 Again, what you’re paying for is the baller-as-hell iconography on the play surface of this tray. 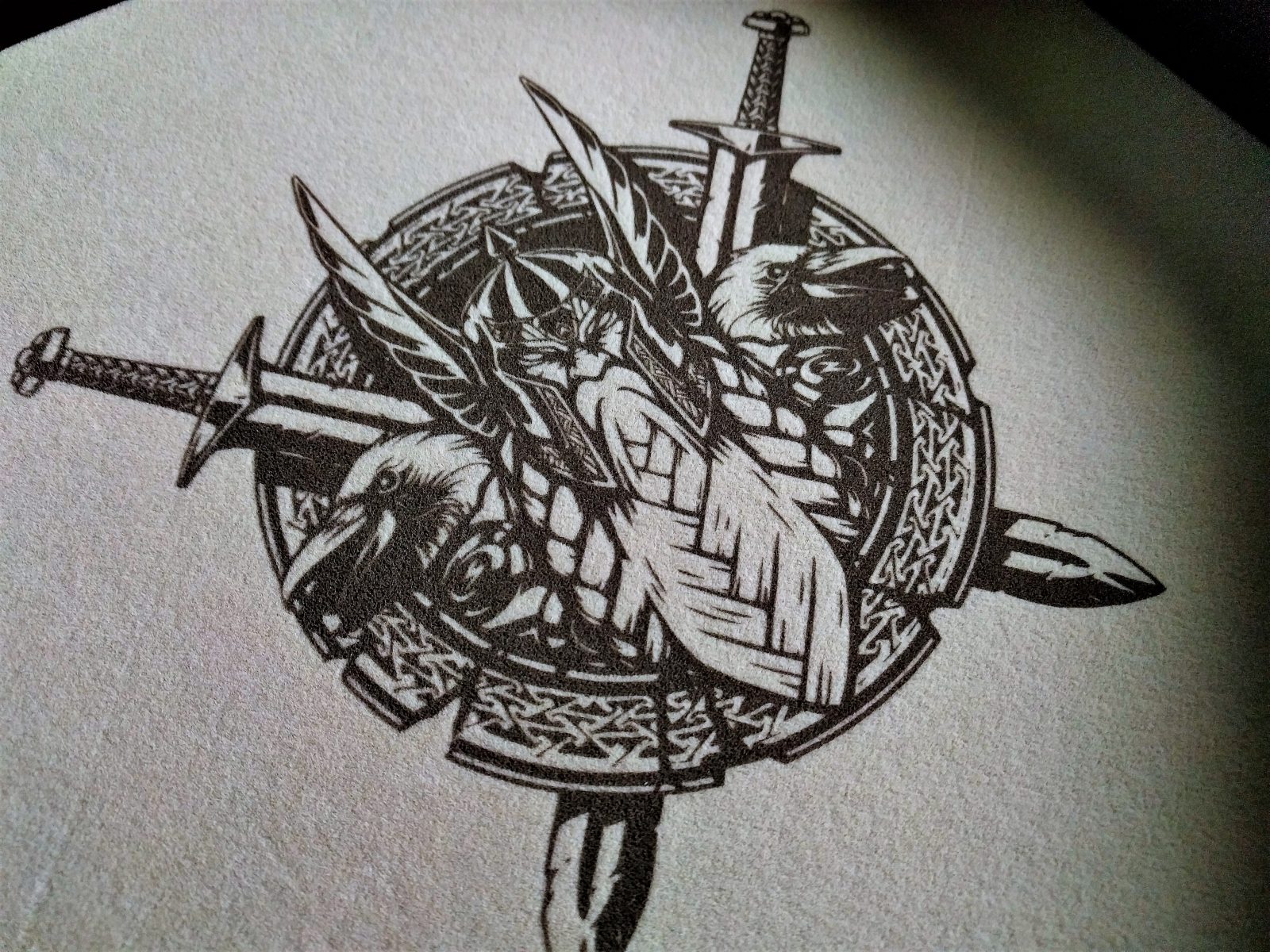 Now I know, I KNOW some of you are, like me, shrieking “Odin is supposed to be missing an eye!” to which I say “You’re absolutely right, welcome brothers and sisters; welcome into the fold.” It wouldn’t bother me nearly as much if it weren’t the only complaint I had about the image! Huginn and Muninn, Odin’s raven familiars, are both drawn very well. A lot of artists forget the trademark hook at the end of the beak of a raven – or opt for a more aesthetically pleasing swoop that you’d find in a crow. The swords, Celtic-like circle, and armor all look really good, the braided beard and hair looks good to me and draws the eye… one eye. Odin. Old one-eyed Odin.

Also: take note, they wrote “premium velvet liner” on the back and I didn’t have a snarky barb about using the word “premium?” 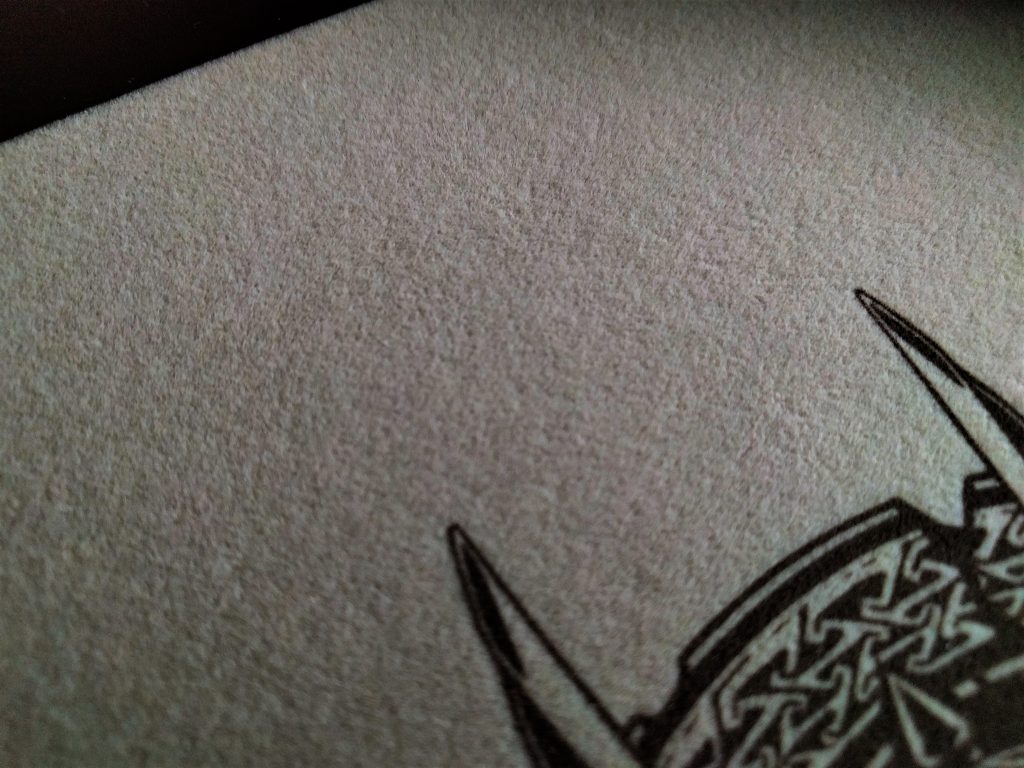 This is the softest velvet I have ever touched in my life. I’m not sure if I just got a special tray that someone conditioned and brushed before I got it, but it’s completely mind-blowingly soft and squishy. A++, would sleep on.

I do have some concerns about the overall build quality present. Let me point out some of the concerns: 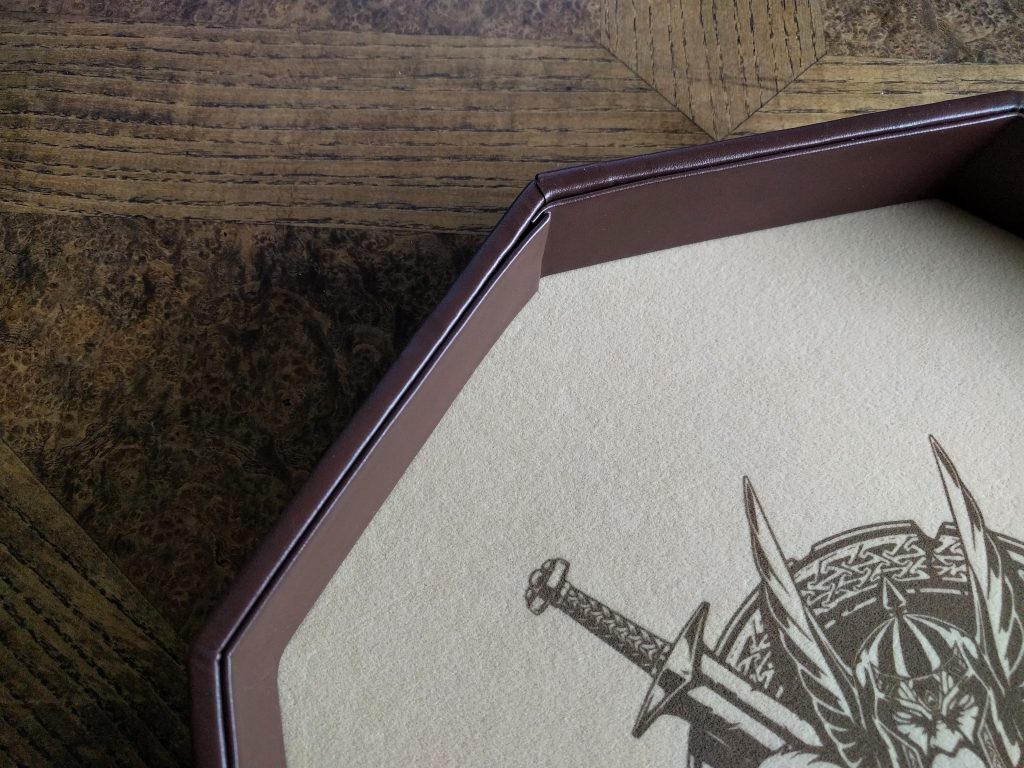 Unlike Easy Roller Dice Co.’s competing tray, the seam where the wall of the dice tray connects is very noticeable. You can see it juts out a full 2mm from the corner where it’s joined. 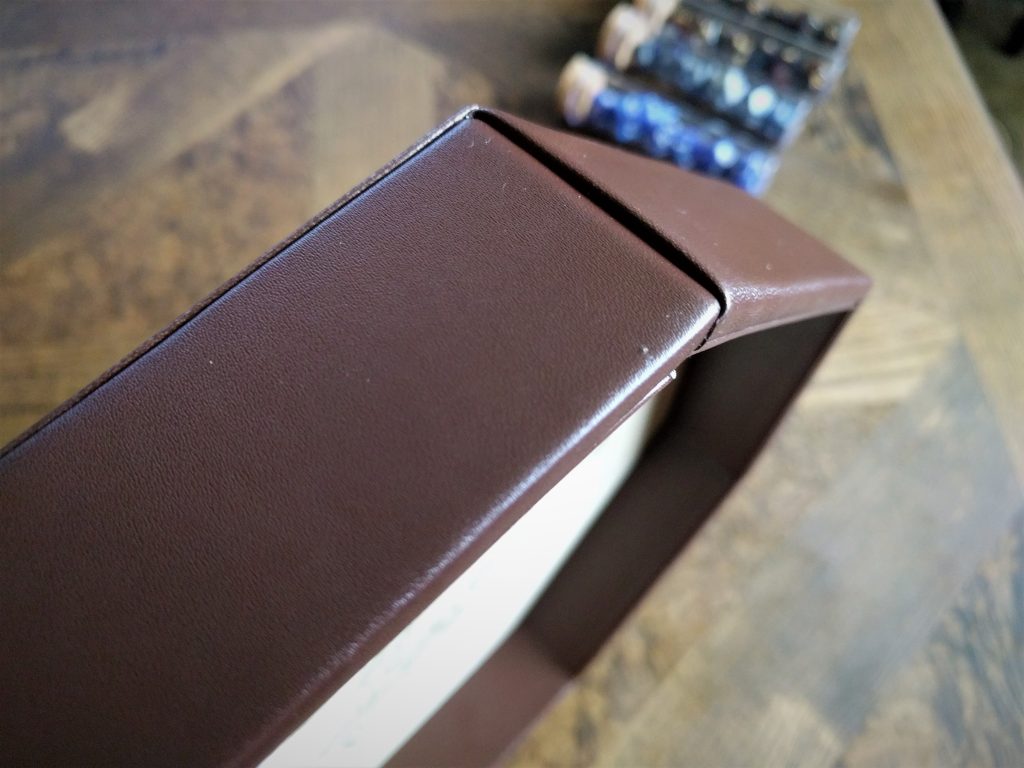 The same is true with the outside seam – the faux-leather is not folded or heat treated enough to keep it very flat. Like a loose seam in the leg of your pants, you look at it and think “that’s not… right?” even if it’s not broken or holds forever! 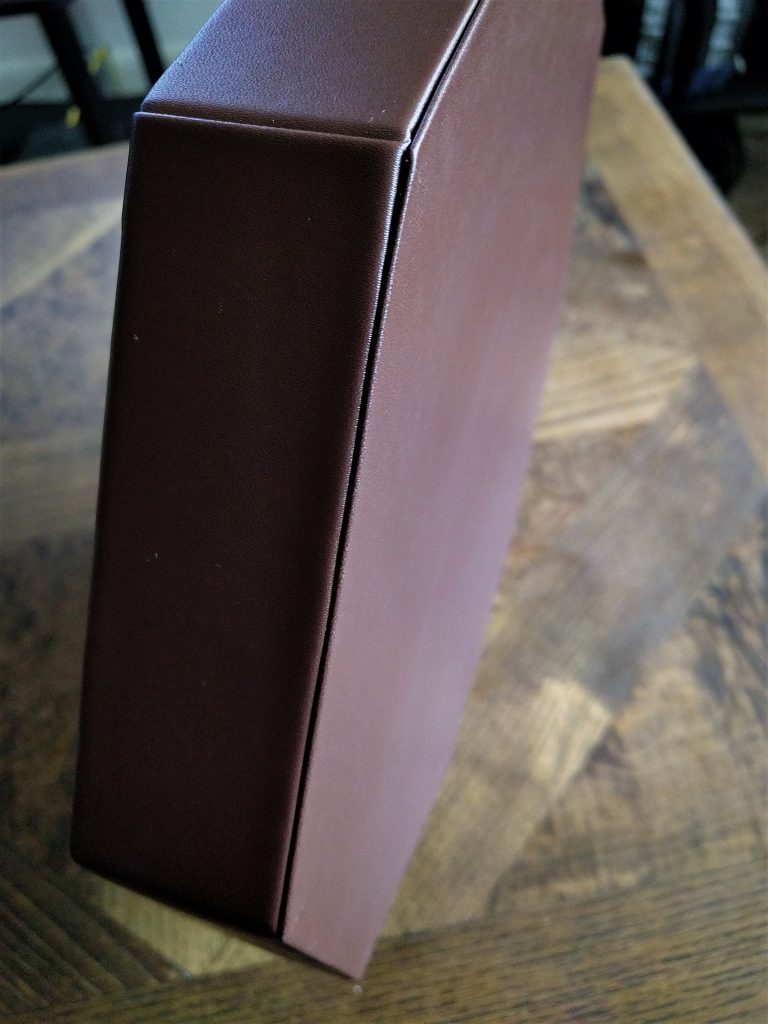 The bottom plate of the tray, where the faux-leather wraps to form a nice flat base, luckily stays flat, but you can see the seam pokes out on the bottom as well. I just have fears that with excess use, the seam could prove problematic.

Note: the people over at Darksilver have always, to my knoweldge, taken great care of their customers – and I’ve been assured that should the seam fail, they work with you to make it right.

I like it. I really do like it. It photographs well, the colors are a good change of pace, the velvet is incredible, You can pretend that Odin is missing at least one eye, people remark “that’s cool!” whenever they see it. It’s huge in size, but not a giant investment like something from Wyrmwood, but it’s STILL pricier than some of the wood and leather options from Nerdist Woodworking and 50% more expensive than the competition tray from EasyRollerDice Co.

For that extra premium in cost, I’d like to see more care put into the packaging and the seam. Even still, take a look for yourself – and Hail to He Who brings both weal and woe. 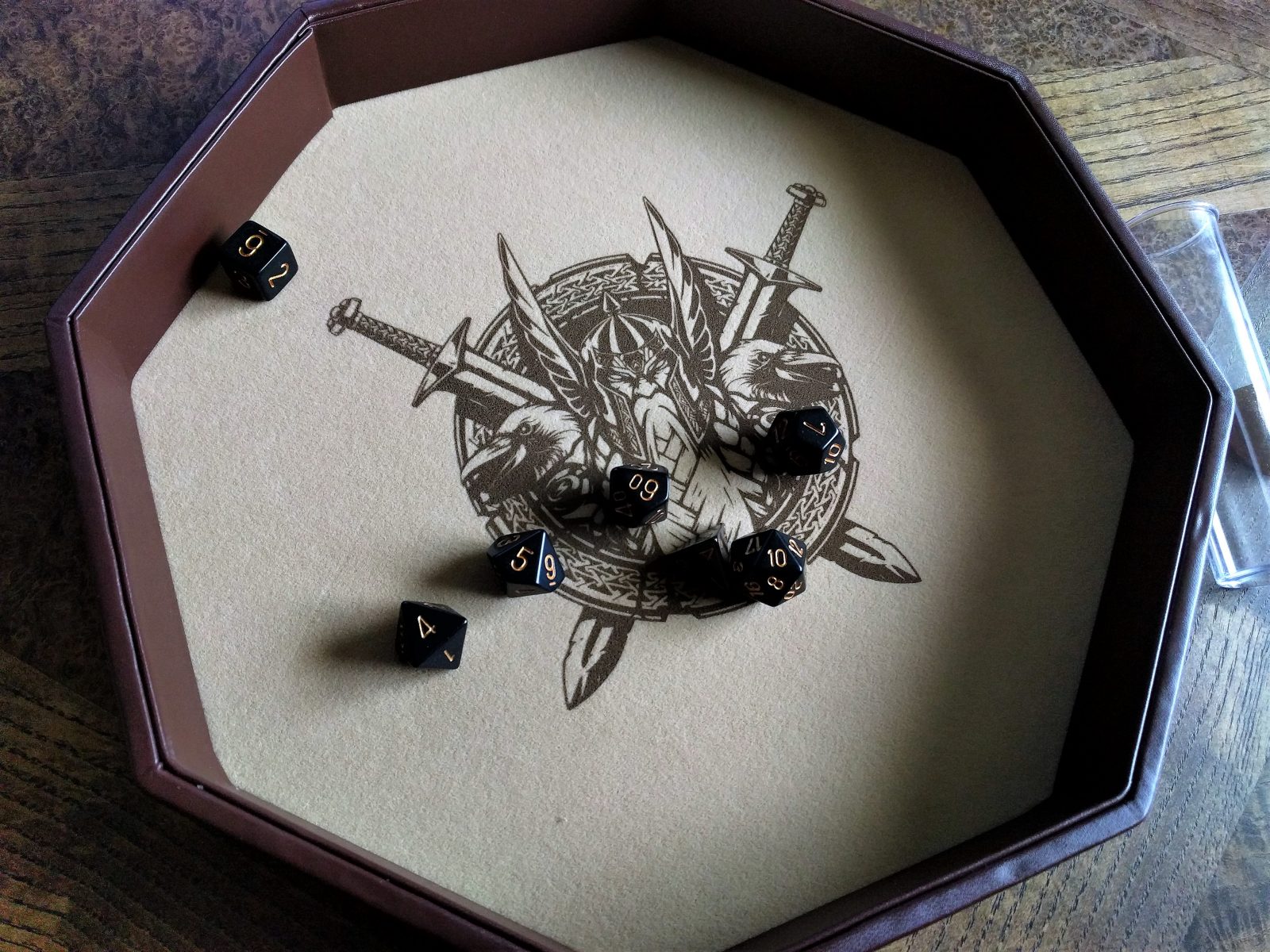