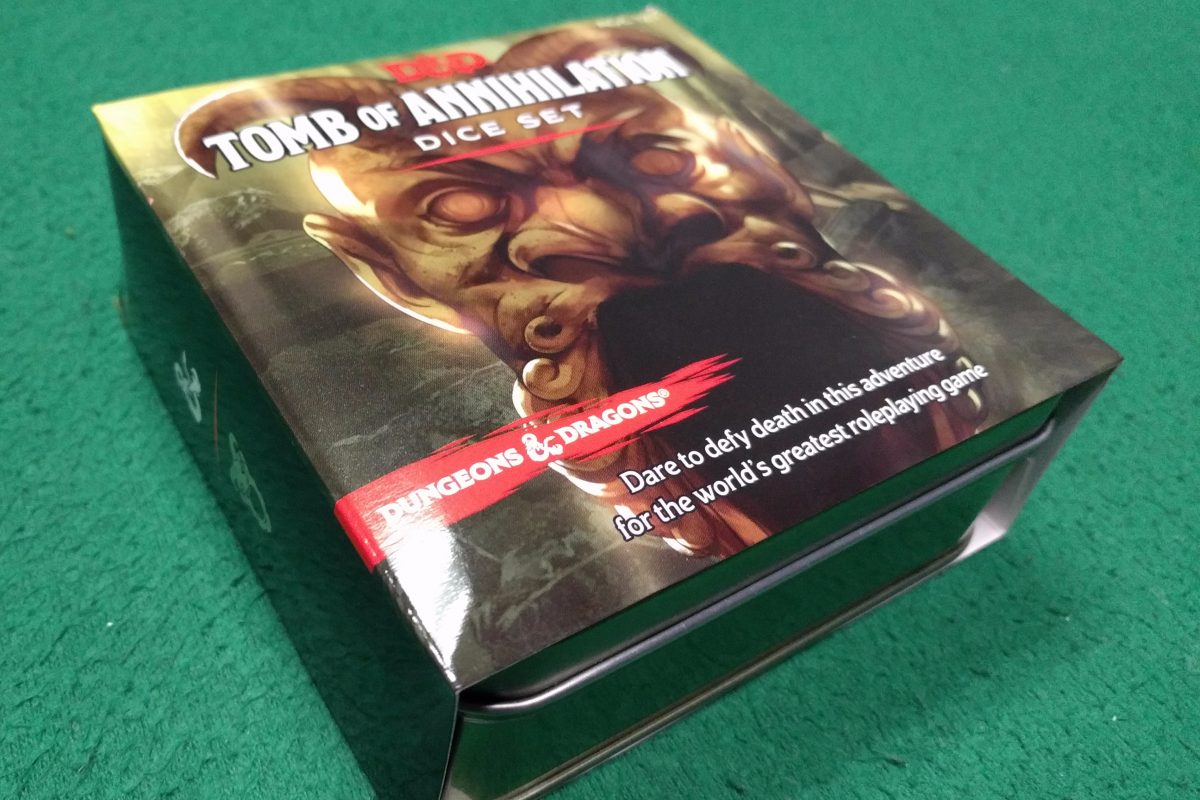 “Dare to defy death in this adventure for the world’s greatest roleplaying game.”
This themed dice set was launched to help herald the coming of the Tomb of Annihilation RPG supplement from Wizards of the Coast.

The release of dozens of production shots and various artworks created a lot of buzz about these things before the dice were even on store shelves, but does it live up to the hype and is it worth your money? Let’s find out.

The Trap of Advertising

Here’s some advice first and foremost. Go into ever purchase, particularly with dice, with a huge grain of salt – chances are most photos you see of them from the actual company will be incredibly doctored and taken in a way to make the product look far better than it actually is. Rely more on “grass roots” types, like myself, to help cut away the fancy lighting and Photoshop effects to show you what the hell you’re really buying.

Your ToA:Dice Set will NOT look like what you see here. Ever. I’m sorry if you pre-purchased it thinking otherwise, but don’t let that sour what you did get.

Other than a simply laminated cardboard sleeve, the dice set is only protected by the actual dice tin they are shipped and stored in. Primarily, people pre-ordered these dice for the tin.

While it’s nowhere near as green and robust as WotC was leading people to believe, it is still quite serviceable. It’s a sturdy aluminum pressed lid with the visage of Devil Face many remember from the classic Tomb of Horrors adventure, in which the face had a sphere of annihilation in its open mouth.

Inside the case, we have approximately 95% foam by volume, giving your plastic dice the much needed cushion it needs to fall from the SPACE NEEDLE without chipping.

Nine of the dice have a traditional looking grey-green color while the D20 sports a more chalky grey green color. Many people, I am told, expected the d20 to glow in the dark – it, in fact, does not.

The idea of this set, i have to point out, was to give a more old-school feel than newer dice. The numbers are not standard to what we find on many sets, but are reminiscent of fonts used in early dice production, more rounded and much smaller on the face of the die (save the D20) – which is most apparent on the D6s.

Likewise, the dice are matte finished – giving them a rough and interesting feel in the hand. I actually think the dice feel quite nice, given how simple and ugly they look compared to say, the My Little Pony set released at HasCon this year.

We’ve looked at the tin a bit, but let’s take a second look and discuss this gargantuan amount of foam.

The dice tin is quite deep. It’s already big enough to fit an entire ten piece set inside as well.

With this added depth, you get enough room to, potentially, fit two complete sets inside with plenty of room between the two for safety or otherwise.

The design was nice enough to break the padding up into two different inserts, meaning that while one insert holds all the dice, the second is nothing more than padding. If this insert is taken out, it frees up tons of room inside the tin, enough room to let it double as a rolling tray, in a pinch.

Now I’m not saying this is a “selling feature” but having a little cubby hole under your dice, or potentially cutting out slots for an ADDITION set of dice (perhaps Aventurine dice from Level Up Dice?) is quite handy. It fits the theme of old adventures having “layers” and hidden treasure.

Like I just mentioned, It could have been a fun Easter-Egg and useful thing for WotC to stamp out the second insert to hold another 10 piece set of dice, essentially doubling the usefulness of the tin.

I also think they could have leaned into the “old school” feel of early D&D by having dice sans-numbers and including a crayon in the tin between those enormous layers of foam – something to really give a nostalgia flash-back to older gamers and let new dice addicts have that old-school feel for once.

But they didn’t. This was a mostly sad attempt to grab some extra attention and cash from people via preorders than anything else. I hate that it’s felt like such a slight to the community considering how marvelous the Dungeon Master’s Screen Reincarnated was!

Listen, you’re not getting anything special out of this themed dice set. You get a pressed metal tin, and some plain dice.

If you assume you’re getting more, then I am sorry you probably feel disappointed. The truth is, a set of dice usually runs $7, a 10 piece set closer to $9. A metal tin costs $4-5 easy. If you’re interested in the face imprinted on the front, you’re paying for a premium up-charge of $7. The math works out to make it not as bad a deal as people think it is, especially if you get some better themed dice or use it as a display piece.

Overall, I’d suggest you pass on this deal unless you really just want to be a part of the action in the first days of Tomb of Annihilation.