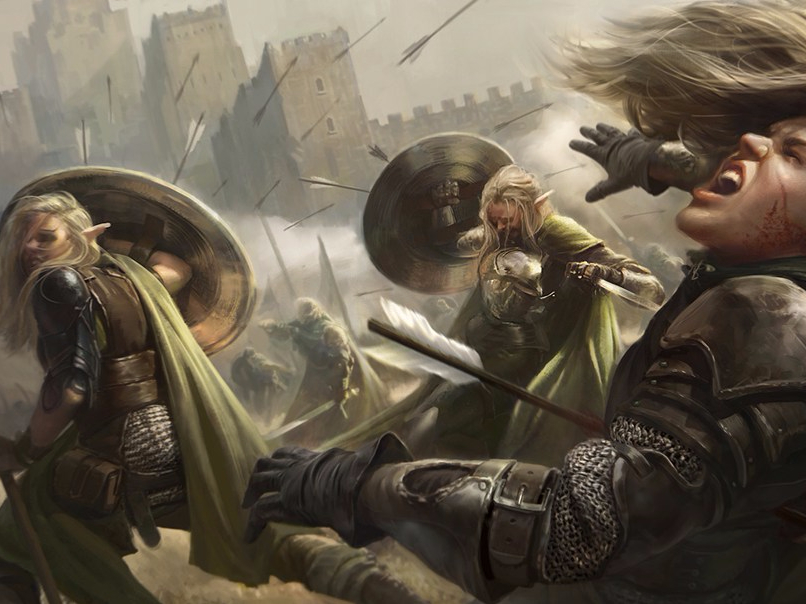 Narrative combat should not be just flavor text for spells and abilities. It should fuel decisions and give each player a springboard to jump off of every turn. But it’s tricky to actually do in-game. Hopefully by the end of this article, you’ll have a better grasp on how to draw your players, peers, and friends into the combat!

Diablo 3 comes to mind, with its “instant and visceral combat” theme – in which heroes carve through swaths of thousands of enemies in a few minutes using various abilities that are incredibly powerful but don’t require anything more than a button press. Having logged 500+ hours into Diablo 3, I can say the game is still fun – as will yours be – if you decided to go this route. But there’s something to be learned from other venues.

A much less popular and successful game called Dragon’s Dogma gives a wildly different experience: players can dodge and dive from enemies, use special abilities and

spells, small enemies can prove difficult in a large enough group, healing is difficult to cast and maintain, and your characters and their followers can climb onto larger monsters to deal devastating damage to them in exchange for potentially falling. Without a grid or the use of incredibly interesting miniatures and terrains, using a dynamic style of narration in your game will, like Dragon’s Dogma, lead to a more interesting and invested experience all around.

There are very few hard-rules for this sort of thing, but I have had a great deal of practical experience in attempting to narrate combat for a group of 4-10 players – so hopefully some of these ideas can help aim you in a more interesting direction.

If your player says “I’d like to grab onto the rope, hang upside down from my feet, and shoot down at the troll holding Kataya.” You should 100% of the time say “You can try!” Why? Because mechanically they’re not changing anything. They’re flavoring their attack in a strange way,  yes, but they’re not asking to do “bonus upside down” damage, after all.

I’ve known many DMs who would say “The bolt would fall out of your crossbow” or “you can try, but roll with -5 and disadvantage.” These DMs are taxing their player’s completely decorative narrative choice for nothing, and such things drive players to default to “I shoot it twice.” No flavor, no description, no risk, no reward, no incredible feat – they’ve instead decided to generalize their turn so they don’t incur a penalty.

Do not get me wrong, if your player is constantly trying to eek out a mechanical advantage from seemingly arbitrary positioning or descriptions, then you need to keep that player in check until they reel it back in to align with your game. “Since I’m above them, I get advantage right? I’m shooting straight down, If I hit them, it’d be in their head! So it should be a critical hit at least.” This kind of thinking will lead to headaches down the road if you cave at their every whim, so be cautious. You don’t want them invoking the “but I’m above them” every single time they fight an enemy to undercut the mechanics of the game – unless you want your entire party hanging upside down from rafters dealing instant crits to everything they fight.

Back Up One Turn

It’s a great practice to roll backwards one turn, describe that turn, then add your own actions on top of it. Then the next player will back up, describe your turn, and then their own.

“Caylen just jumped down off of the balcony onto the back of the carriage and is hanging on. So I’m going to spur my horse around and try to catch up – I want to pull Caylen off the carriage before he falls.”
Okay, roll me an animal handling check. 18? You drive the horse forward and get it lined up with Caylen, but the smoke inside the carriage is making it hard to see – when you pull on Caylen, his armor is hung on the canvas! Tasha, it’s your turn.
“So Jaquis spurs his horse up to the carriage and he starts pulling at Caylen, but there’s still a guy whipping the carriage’s horse on. I want to try and kill that guy so he lets the reins go.”
Sure! You’re in range and still in front of the carriage at this point, so go ahead and roll the attack.
“Since I’m a really good archer can I just shoot his hand?”
Nah, we don’t do called shots, but I’m sure he’ll be less inclined to drive the carriage with an arrow in his ribs, roll it!

By urging your players to summarize the previous turn, and summarizing your own turns when it’s your time to shine, you will see a drastic improvement in overall understanding of the battlefield and their position in it. Ensure your players that you’re on their side (he might drop the reins) without adding extra or new mechanics to accomplish the task (roll disadvantage to hit his hand and make him drop it).

Let Them Shine, In Their Own Way

The caveat to what we discussed above, of course, is if the character HAS an ability that allows them to accomplish the task.

“So I see what Tasha was trying to do, trying to make this guy drop the reins and help slow the carriage, but he missed. I am a battle master fighter – one of my moves actually lets me disarm an opponent if I can hit them. Could that work?”
Absolutely, if you spend the superiority dice for it and they fail their save, you can harry him into dropping it; you’ve trained for this exact thing. Roll it!

You see, had you given the mechanical advantage to Tasha last round, there’d be no

reason for your Battle Master fighter to even use their ability – they’d have just “tried again” instead of thinking outside the box and applying their own skills.

If your Rogue has built themselves to trip and disarm people – give them opportunities to trip and disarm. The Wizard needs access to spell books and tomes as well as magical effects on the battlefield to try to manipulate. Each character has a skill set that can be applied in interesting and different ways – all you need to do is follow their own narrative desires to keep them engaged and moving.

“So, I just got free and Jaquis is here with his horse, Vismit managed to shoot the reins out of that guy’s hands… Is there any way I can stand on the back of Jaquis’ horse and jump to the front of the carriage?”
Hmmm, that’d be very difficult for you in your position – heavy armor and big bulky weapons. You’d end up having to make a Dex check not to fall off… but, the carriage isn’t ablaze, just smoking and smoldering, you could easily break your way through the inside of the cabin to the driver’s seat if you were inclined, you could climb your way across the roof of the cabin with an Athletics check, or even smash the wheel right next to you and veer the wagon off course. All of them are viable options in your current position.
“You don’t even have to ask – I’m going to smash through the goddamn wall inside the carriage and try to grab the driver!”

A lot of DMs, MCs, Keepers, Rulers, GMs, etc have this strange rule of “don’t make them do anything” but your players are relying on you to give them enough information to make a decision on. If Caylen’s player knew there was no fire inside the carriage, only smoke and some burning embers, and knew the wall looked flimsy, and knew the wheel was right beside him, and knew the positioning of the horse was strange, and knew the carriage had a hard enough roof to climb on – then their decisions might be different: but it’s a moving, evolving, changing fictional landscape, even you, the storyteller, have to scramble to make things up and repeat the surroundings to yourself.

It is not unwise to give your players various threads to tug on, options that showcase their abilities in interesting ways. Because energy levels skyrocket when a turn starts like this:

“Well, I shot at and missed the driver, then saw him get shot by Vismit and drop the reins. Then two giant armor-clad arms burst out of the carriage behind him and started crushing his throat – so… I think I’m going to just whistle for my horse and try to catch up before anything else catches on fire!”

You will have a player who pays less attention than the others. It’s just a thing that happens. That player will grow complacent or confused, maybe have a hard time recalling what’s happening after 20 minutes of combat have elapsed. As my DMing career has moved forward, I’ve cared less and less about the mico-details of these encounters – I just want my players to do cool shit. And one way to coax players who pay less attention into DOING cool shit, is by making the encounter evolve around them.

Your players are walking toward the castle they were sent to meet a troublesome land owner at. Suddenly, the guards open fire on you! People swarm out of the breaching gate and head toward your party, arrows still raining down. Initiative starts. The paladin, a little bored and confused, says “Wait, I thought we were supposed to be meeting with him?” BEFORE YOUR OTHER PLAYERS start tearing them apart for not paying attention, bring it back into the game. Make the game answer those questions and evolve.
“Creed, you see the arrows… aren’t random. They’re fluttering over the heads of some of your comrades and right at your ward, Noori! She ducks behind you and says ‘Creed! They’re trying to kill me, I knew Lord T-‘ and an arrow buries into her side, just above her hip – what do you do?”

It’s not enough to just answer the question and then go down the initiative track until something cool happens – you need to thrust the urgency upon the player who is least invested, be sure they know what’s happening enough to react, but try to have the game reach out and pull them, don’t just sit around waiting for them to get the memo or climb on board – actively pursue their investment/interest and most of the time you’ll get it.

Instead of “I wait for someone to hack at with my sword” you’ll get “Where can I drag Noori? Can I protect her with my shield, I have a lot of AC and Hit Points. Can we get far enough away the Arrows can’t reach? If I heal her can she run for cover while I draw their fire? Zane, cast a fog cloud so I can heal Noori without getting shot!”

And that’s the kind of thinking you want in your encounter – otherwise your players turn into a damage number instead of living breathing people.

Here’s a “TL;DR” bullet point to share with your friends and players

Hopefully the next time you run a combat encounter, you can spice things up using what I’ve laid bare before you. Let your PCs shine in awesome ways that your NPCs can one-up in their own way – it should always be a match of who can be cooler and more interesting. Just remember that the story is theirs and yours. Keep it as fair as possible, but you’ve never heard someone say “I’m glad he made me climb down the ladder before I shot – hanging upside down and firing would have been too much.”

One thought on “TTRPG Advice: How to Narrate Combat”