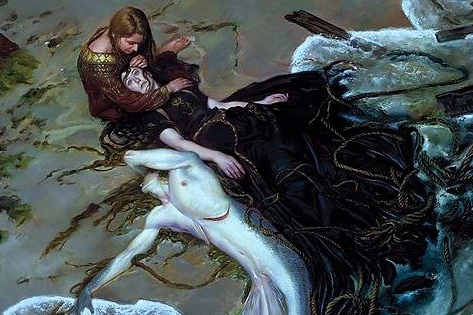 Another week of sad postponement for a product review. I’ve got amazing stuff coming up, but due to weather and personal strife – it’s had to take a back seat. Instead, I’m going to talk to you about a very important aspect of Tabletop Gaming that I’ve finally felt adept at: Improvisational Roleplay. What it is, how it works, tricks to get into the mindset, and important information every player – new and veteran – needs to hear over and over again.

The Hell Is It?

My most recent personal victory was running a full four-hour session of Dungeons and Dragons 5th Edition on about twenty minute’s notice. There was roleplay, a new PC introduction, shopping, a quest, a journey, a strange location, familiar and new villains, a romance sub plot, a mystery, and foreshadowing for things to come in the far future for my game all pulled out of the thinnest of air. I still feel pretty goddamn good about it, and that happened three weeks ago!

Improvisation, by definition, is attempting something without prior planning. In a roleplaying game, some measure if improvisation is mandatory for the hobby to even function, but many people struggle to get the hang of it. I know DMs who spend 10 hours planning for a 3 hour session and I know players who struggle all week to think up a few things to say for their game… but what if I told you that you’ve been “improv roleplaying” your entire life, you’ve just not realized it? When you finally train your brain on how to switch into that gear – you’ll truly experience something magical.

A what is where?

I want to do an exercise with you – and by the end of it, I hope you’ll feel more capable of improvisation as a player and a DM.

I want you to think back to a time when you were young. I want you to remember just one instance where you got into some trouble – one that you can think of clearly. Picture the setting (your house, a store, a car, a family friend’s house) and how you fit into it at the time. Quickly, either think of what happened or even write it down: It’ll be worth it, I swear.

I was probably 11, at home with my elder adopted sister. We were supposed to be doing our homework, but she actually found my dad’s handcuffs and handcuffed my left wrist and her right wrist together. We didn’t have the key. I was very upset and tired of dealing with her, but I knew there wasn’t anything I could do. She banged the handcuffs against stuff and thrashed about all over the place – it rubbed my wrist raw. Her cuffs kept getting tighter and tighter, her hand was turning red and she was crying by the time dad got home. He told her that he had lost the key to those handcuffs – she wailed for ten minutes, screaming and crying – jerking my arm around. He looked at me, shook his head, then went out to his truck and came back a few minutes later with the key and uncuffed me then her. I finished my math homework while she cried in her room over the cuts on her wrists.

So, now we’ve got the memory. It’s nice and clear, we get the story and the vibe of what happened. We have the scene all laid out in our heads… Now to wrap your head around improvisational roleplaying – somewhere in your story, in a spot that would be THE WORST for you… I want you to put an angry bear in there: frothing at the mouth, trying to get to where you are.

. . . You don’t have the key. You’re very upset and tired of dealing with her, but then you heard the growl of a bear at the front door. . .

This little trick is used a lot by fiction writers. When their story feels flat, they “put a bear at the door” – they ramp up the energy, action, threat, and tension of the story in a crazy way. We’re doing it for a different reason: How does the story change AFTER the bear comes in? – Try to imagine that every action that you take is in your own voice, but everything else is being spoken to you – as you’d play a game.

Thinking back about yourself is a hell of a lot easier than imagining you’re in the shoes of a 1920s detective driving through a swarm of locusts while his girlfriend starts to vomit up blood, BUT by getting your head in this fundamental space, we’ll be opening up your ability to empathize with your characters. Let’s do it with my story, and you do it with your story after.

—- So my sister and I are handcuffed. At the time, I was annoyed and wanted to stab her with my mechanical pencil, but if there was a bear at the door trying to break into the house, my priorities would go from angry to probably scared. She’d be freaking out, pulling me around, so I think the first thing I’d do is try to calm her down. —-

—- Now what? I’d have to try and get to somewhere safe, yeah? I was little – there was probably no place safer than my parent’s room to me. But we’d have to go by the front door. —-

“I drag her with me and run past the front door toward our parents’ bedroom.”
The bear smells that her hand is cut up and starts knocking the door down.
(I know I’d be scared to death) “We both start screaming and run down the hall to my parents’ bedroom door!”
The door is locked.
“Luckily, we’ve locked that door before, I try to cram a paper clip in the pinhole to disengage the lock.”
The bear finally bursts inside – just as you two run into the room and slam the door shut behind you.

Now we’ve taken a memory, a pretty annoying one that, if I’m being honest, contributed a great deal toward my still-burning resentment toward my sister, and made it into something very different. A story in which we had to work together to run from something even worse. I sincerely advise you do this same exercise up to three times.

How to Apply It

In your games, it’s sometimes easy to think you need a “plot generator” on your phone, a list of things to do, or some chart to roll on. But really the fundamental I’m trying to aid you in developing is the idea of “natural progression.” Improvisation is about reacting to everything that comes at you – in your game, you’ll be reacting to the other players and the DM.

Our first instinct is to “go along with it.” You’ll hear the phrase “yes, and” tossed around a lot – no matter what happens, say “yes, and” then keep the idea flowing.

“Is there a parked car under the window?”
“Yes, and it’s a convertible with a soft-top.”
“I jump out the window and onto the car!”

Using our above exercise, the “yes, and” approach can work. “Is there a bear at the door?” “Yes, and it’s trying to get in.” And while this is a good idea, sometimes in your RPGs – it’s just not natural. You see, we’re not doing improv comedy or planning out a cartoon. In your games, it’s better to play your character than it is to simply go along with the flow.

Above we played ourselves, but think about your current/favorite RPG character in that same situation: Would they run and hide? Would they cut off their sister’s hand and leave her for the bear? Would they press their backs up to the door and try to hold it closed, together?  – These are the questions you need to ask yourself while playing in your game!

Exercise #2: Keep yourself focused on your character and just blurt out the first answer that comes to your head. Don’t think, stutter, stammer, buy time, or say “Would my character do that?” – just let it happen and see how things unfold.

Now breathe. Relax. And think about the scene that just happened. Start to finish. I bet that shit was like a scene from Pulp Fiction and I did almost none of the work. THAT, my friend, is how you improvise in your game… Congratulations.

When burying yourself in roleplay – it’s sometimes very taxing on you. You get emotionally invested, you get drained, you fear that no one will enjoy what you’re doing. As a DM/GM – it’s even worse. But I urge you to realize that whatever you’re doing – whatever time you’re taking – is perfectly fine. I’d rather have you speak at a comfortable pace and give yourself time to think of the scene and what’s happening than blurt out what you, the player, want to do.

You enter the room – Kira is on her back in a pool of blood – she’s been shot!
“I LOOK AROUND THE ROOM FOR CLUES!”
Your wife was just murdered…
“DO I SEE ANY FINGERPRINTS?!”

Don’t be that person – it’s frantic, taxing on the players and the DM/GM, and makes for shallow story moments.

Breathe, relax, and think about our exercises – go on your first instinct and let it happen. Just like in REAL LIFE, you have several chances to change your mind if you are improvising and decide you’ve made a mistake.

If you read that last line and thought “NOT MY GM! THEY’D MAKE ME -” you should have a chat with your GM and send them this article. That’s damn good drama!

A few quick-shot last-minute tips for you: